FOR MY first column of 2019, I was very much looking forward to writing a snarky broadside against the new arena, complete with applicable quotes from recent Netflix documentaries.

“I don’t know how we could have been so gullible, when there were so many red flags.” - Bob Broburg, the clueless dad from Abducted in Plain Sight

Over the past week or so, I’ve sat down with several individuals to talk with them about the new arena, in an effort to fill in gaps in a narrative that I thought I had the basic outlines of.

To be honest, I was hoping to uncover some sort of vast conspiracy, or to find a hidden villain. Spoiler: I did not.

But in the last of these meetings I did discover a part of the story previously unknown to me - and I’m guessing unknown to many - that completely changed my understanding of the arena narrative, and where it should go from here. 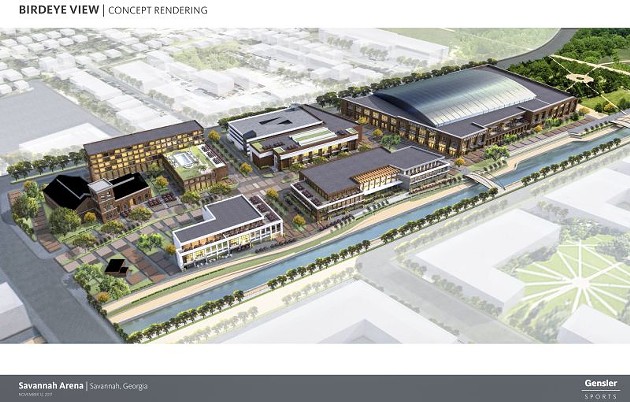 I now see that there is a case for the new arena at Stiles and Gwinnett, under certain conditions. Let me explain.

I was having lunch with Bernetta Lanier, President and CEO of the Ivory Bay Community Development Corporation (CDC) at the Temple Café at Temple of Glory Community Church, on Stiles Avenue, just south of Gwinnett (had the fried flounder and sides – it was all wonderful). Others at our table joined in the conversation, but asked not to be named.

Here is the expanded arena narrative I learned from Bernetta Lanier and company:

Talk of a new arena at Stiles and Gwinnett, adjacent to the City’s waterworks building, goes back about 20 years. Then in 2005, specific promises were made by public officials to Savannah’s 1st District residents: vote in favor of SPLOST, and your district will receive the previously discussed new arena at Stiles and Gwinnett, a new Public Safety Complex, and a new Cultural Arts Center (CAC).

We all know where the new CAC ended up being constructed (Oglethorpe and MLK), to a good deal of controversy of its own. That’s one promise broken.

So of the three, the new arena is the only promise its still possible to make good on. And the new arena, specifically at Stiles and Gwinnett, was again explicitly dangled in front of the 1st District in exchange for their votes to re-authorize SPLOST in 2013.

As a man at the table said, “We voted in two SPLOSTs for one promise.”

So now, with another vote for SPLOST re-authorization looming, public officials find that they have painted themselves into a corner. Votes in the 1st District, essential to passing the last two SPLOST votes, may not be there if forward progress on the new arena, at Stiles and Gwinnett, doesn’t materialize NOW.

Some in the community have even shown up at meetings wearing T-shirts that say “No arena, no SPLOST.”

This explains the rush to break ground before the upcoming election – to show that the promise is being kept, and get those votes again. Gotta keep that SPLOST valve open.

Bernetta Lanier and the others at our table obviously care deeply about their community. They sincerely believe that a new arena complex at Stiles and Gwinnett can help uplift that community, if properly planned. But there’s the rub.

The proper pieces are not in place, as Lanier points out herself. She is not against the arena at Stiles and Gwinnett, but she is deeply disapproving of how the process is currently moving forward, without enough community input.

According to Lanier, that missing community input should be used to produce two things: 1) a Community Benefit Strategy, and 2) an Area Plan, for the communities adjacent to the arena complex.

Value will be created around this arena site, and as she says, “All that equity is going to go somewhere.”

But without the above pieces in place, it will be mainly to outside investors rather than the community.

So, I do see the case for the new arena at Stiles and Gwinnett, IF it is done in a way that truly benefits the surrounding communities. The 1st District has long been neglected, and deserves some uplifting public investment.

This is not to say that I now think Stiles and Gwinnett is a good location. I most certainly do not. Every critique made by Marcel Williams in his 5-part series for Connect last summer still stands, and the City has still failed to adequately respond.

I highly recommend that you go back and read the series if you have not already, and to read it again even if you have.

And let’s not forget that it’s basically a scientific certainty, backed by empirical observation (see Freakonomics podcast 323, on the Planning Fallacy) that projects of this scale will be over-schedule, over-budget (usually by at least 40%), and fail to produce benefits at the scale promised.

This is because of predictable human error in the planning process, and because of deliberate “strategic misrepresentation” – basically, lying in order to get support for the project - by consultants, designers, and public officials.

The planning problems will happen with any project of this magnitude, given human nature, but the problems specific to the Stiles and Gwinnett site could be avoided by choosing another. Good arguments have been made for the existing civic center site, or other sites adjacent to the northwest corner of downtown (again, see Marcel’s series, part 5).

So, due to a long history of political promises made in order to keep the SPLOST valve open, we have two half-good arena options:

1) A new arena on a sub-optimal site, that lifts up the surrounding community through a great deal of work being put into an Area Plan and a Community Benefit Strategy, or

2) A new arena on a more optimal downtown site, leaving the 1st District with yet another broken promise from public officials, still looking for a big public investment that will spur beneficial private investment.

But given the City’s behavior on this matter, refusing to address very solid criticisms by the likes of Marcel Williams and others, and its failure to engage with the likes of Bernetta Lanier to ensure that this massive public investment actually benefits the surrounding community, we seem to be headed for a third scenario that combines the downsides of both those above, and the upside of neither:

3) A new arena on a sub-optimal site, profiting outside investors, but doing nothing meaningful to uplift the surrounding community, and perhaps actually harming it.

Elected officials of Savannah – if you seriously cannot put aside politics to slow down this new arena process and improve it, one way or another, then what good are you? Please let us know, since we have that election coming up and all.