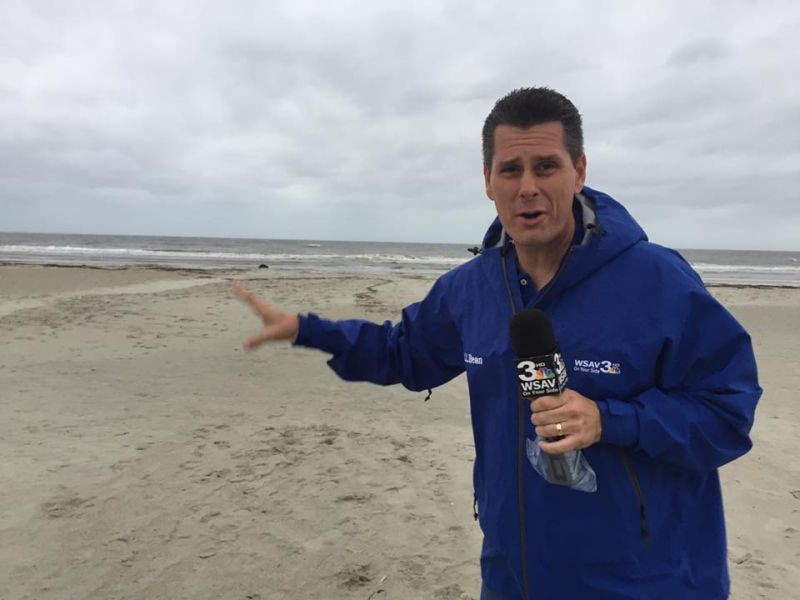 A first win for this ten-year veteran of WSAV, who came to Savannah from the Mobile, Alabama, market.

“I decided it was time for a change. I wanted to stay in the South and was lucky enough to get offered a job here,” Davis recalls.

Savannah is a far cry from Mobile, Davis says — or just about anywhere else.

“Savannah is a great market for news because there’s always something going on. The politics are usually interesting, somewhat different — even unusual at times,” he says.

“Savannah is a different community because of the longtime ties that many of the local leaders and ‘movers and shakers’ have here. That at times makes it difficult for a new reporter to get the inside scoop on things. It does take some time to gain trust and makes sure your interview subjects and sources know that you are there to do a job, and do it right, not embarrass or backstab them,” says Davis.

However, he adds that, “Once you are recognized in Savannah, you are embraced and folks on all sides are more willing to open up. Everyone then knows that you are there to help the community or expose the wrongs that are going on. I have been lucky over time to gain that trust in many corners, and am grateful for any and everyone who does speak to me on or off the record.”

Davis says investigative reporting has become more important than ever in this climate.

“Anyone can throw the basics of a ribbon cutting, a crime scene, or anything else on Twitter or Facebook, and yes it is important to get that information out fast and first, as long as it is correct. But now more than ever people want to turn on the TV and find out the backstory, the inner workings of government, the families behind the shootings, the ins and out of money spent, and if their tax dollars are being used wisely.”

He says he and his colleagues at WSAV “focus on doing deep dives into the stories about moneys spent, the projects that may or may not be wise, and why or why not. But we do it without losing the human aspect. why are these things happening and how does it affect you, the man or woman on the street.”

The proudest moments he’s had working on investigative stories are the most challenging ones.

“Going in depth with Chris Templeton, the priest abuse victim. I was honored that he let me tell his story in the first place, knowing I would tell it with respect, without being sensationalistic. Then to be in the courtroom with him and and see the man who abused Chris get arrested and sent to jail,” Davis remembers.

“I believe I was able to give him a little bit of help in his quest for answers and peace, and I still continue to follow his story and so many other victims’ stories like him as the civil and criminal cases continue,” Davis says.

“It’s not just about getting an interview, its about telling someone’s story... and doing it right.” – Jim Morekis