A tattoo artist for 15 years, Butcher owns and tattoos at The Butcher Tattoo Studio and Art Gallery downtown. He’s also a talented painter and illustrator, and he was recently tapped to paint a mural at the Starland Yard.

We spoke with Butcher last week. 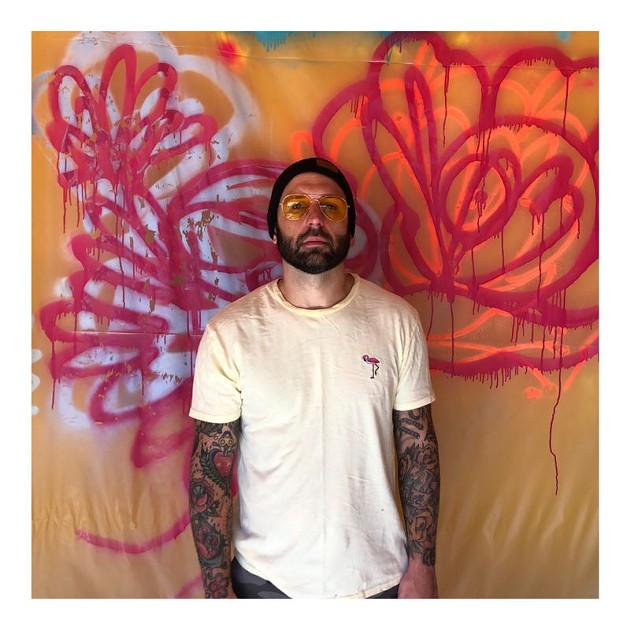 1. Tell me about how The Butcher got started.

The Butcher started in 2011. When we opened this space, it was me and my mentor at the time. About a year and a half in, he wanted to do things differently, so he split. It was tough because I was tattooing as much as I could possibly physically tattoo, and still trying to do conventions and gallery shows to supplement everything I couldn’t handle with tattooing.

It’s funny, I was always reluctant to use my name. I talked to a small business coach who said, “Don’t ever name your business after yourself,” because it makes it about you, and when you’re creating a customer service business, you want it to be about everyone else. I thought that I agreed with her, but throughout my career, I never was really able to escape the name, even when I tried. I’d say, “Nah, don’t call me that,” when I was first starting as a tattooer. People thought it was a nickname—that’s a bad nickname for a beginning tattooer!

I thought if I embraced it and I curated the vibe of the shop in a way that was kind of the opposite of what you’d expect from something called The Butcher, it’d be awesome. And then I worked really hard to make sure it wasn’t about me.

I always tell people, “As an artist, the worst thing that can happen to you is you have your artwork on a gallery wall and nothing gets said.” And no one walks past the shop without something to say. There’s just much bad as there is good, but I take it the same way.

2. What’s your artistic background, and how did you get started tattooing?

I do everything, and it’s really important for me to talk about the art. I graduated from college with a bachelor’s in painting with a concentration in graphic design. I always wanted to do streetwear. I’m an MTV kid, so when I was growing up, I was like, “Man, I want to see my designs on the clothes those guys wear.”

I moved to Savannah on a whim. I didn’t really have any plans other than to just leave the town I was in, which was Charleston, West Virginia. The type of thing I wanted to do just wasn’t there. I didn’t know if it was here, either, but I took a chance on it.

I worked at Tony Roma’s, which is now Tondee’s Tavern, and I was hanging out at the tattoo shop that was right next door—it was called Alien Arts. I would just get off work and go there. I wasn’t getting tattoos, I wasn’t really into tattoos. Months went by, and after not doing anything creative, I asked for an apprenticeship. The guy said, “Yeah, you can have an apprenticeship if you can give me five full sketchbooks of artwork that I find impressive.” I had eight sketchbooks on me when he said that, so I showed him, and he liked it. So that was 15 years ago.

3. Do you feel like your style has changed in that time?

My style changes several times a year. It’s good and it’s bad, because I’ll change my style and then have a customer come back from years prior—sometimes even six months prior—and they want something I’m not doing anymore.

I’m inspired by music and fashion, just like popular art I look at. I don’t really look at tattoos. I’ve never done that, and I’ve worked really hard to make sure I don’t do that.

I acknowledge this, and I think that anyone that works creatively could do this, too—I know that I’m heavily influenced by a lot of stuff that I really like. But I don’t use it when I know I’m being influenced by it. If I sit down and want to paint, and I want to create something in the vein of this thing that I saw, I try to draw it from memory. If I do that and I think about all my favorite paintings I’ve seen over the past six months, and I try to channel that into my painting, it’s mine. It doesn’t look like I’m copying anyone or ripping anyone off. I find that’s the truest way to do something new.

All things hip-hop culture are heavily influential in everything I do, and what’s really cool is that’s really popular right now. My childhood was really popular. I’ve been drawing Bart Simpson since I was a kid, and now that I’m doing it, people are like, “Wow, that’s so popular and cool.”

4. What were your influences for this mural?

I started this process a few years back, where I wanted to get really loose and gestural. I was using brush pens a lot and mentoring under a Japanese artist that lives up in Vancouver. I was doing these really loose, gestural flowers and organic things and it became a go-to for me, keeping in mind the graffiti influence of growing up and never having done graffiti.

I wanted to make the mural really big, do something kind of non-representational, a little more abstract for a space that big. I didn’t want to get specific or hone in on any theme. I just wanted it to be energetic.

I’m making a softer transition into a more artistic career. It doesn’t mean I’m not going to be tattooing at all, but it means I’ll be tattooing less to focus on other creative stuff I want to do. This mural and other stuff I’m planning is definitely part of trying to make a splash with that.

It’s always felt a little bit to me like I’m trying to convince everybody who knows I’m a tattoo artist that I’m a lot more than that. Not that it isn’t something impressive, but I always put it like this. If you were a graphic designer and you said, “I want to tattoo,” most of the people around you would be like, “That’s a great idea.” A lot of times, when a tattoo artist says, “You know what, I think I want to design clothes,” they’re like, “Nah, man, you’re a tattoo artist.” It’s this weird double standard that I’ve never liked and never felt comfortable with. I think I’ve done a good job with the shop and my reputation and pushing that as hard as possible, but what’s next for me is pushing even harder into the realm of actually putting some of these products out and more art where people can see it and more gallery shows and things like that.

Recently someone said to me, “So I see you’re doing this mural. Why are you doing this? That’s so different than tattooing.” I fight the urge to get upset; I’ve reached out to people like, “How do I calmly answer this question?” It just comes back to the fact that I’ve always been an artist. Art is my first love. Tattooing has been my career for 15 years, but it doesn’t define me as an artist.