YOUR Mayor and City Council have had a pretty relaxed schedule over the summer. One meeting was over in less than half an hour, and one had to be cancelled because not enough members were in town for a quorum.

But, spurred on by no doubt sincere concern over recent mass shootings, City Council addressed the topic of gun control at last week’s meeting.

While acknowledging that City governments can do little to enact meaningful gun law reform, the consensus was that it would do some good to send the resolution to some people who can, such as our two Senators and our House delegation.

Miller said the resolution should urge “expanded background checks and banning of any magazines more than ten rounds.”

Alderman Van Johnson, who is running for mayor and has long advocated for more gun reform, said, “the city of Savannah should lead the way in terms of issues involving guns.”

Referring to mass shootings, he asked, “what happens the day that it becomes Savannah?”

Johnson reiterated that one easier, state-level change could allow guns confiscated in crimes and not needed for evidence to be destroyed, rather than auctioned or sold, as state law currently dictates.

Alderman Brian Foster suggested support for so-called “Red Flag” legislation, which would curtail gun ownership of people presenting a provable danger to others.

Mayor Eddie DeLoach, ostensibly a Republican on this non-partisan Council, made it clear he supported all the gun control suggestions presented.

A cynical observer might answer Alderman Johnson’s comment with the quip that with our high crime rate, Savannah already leads the way in terms of issues involving guns.

But he and Council are no doubt correct that there is a growing public appetite, locally as well as nationally, for more gun control measures. 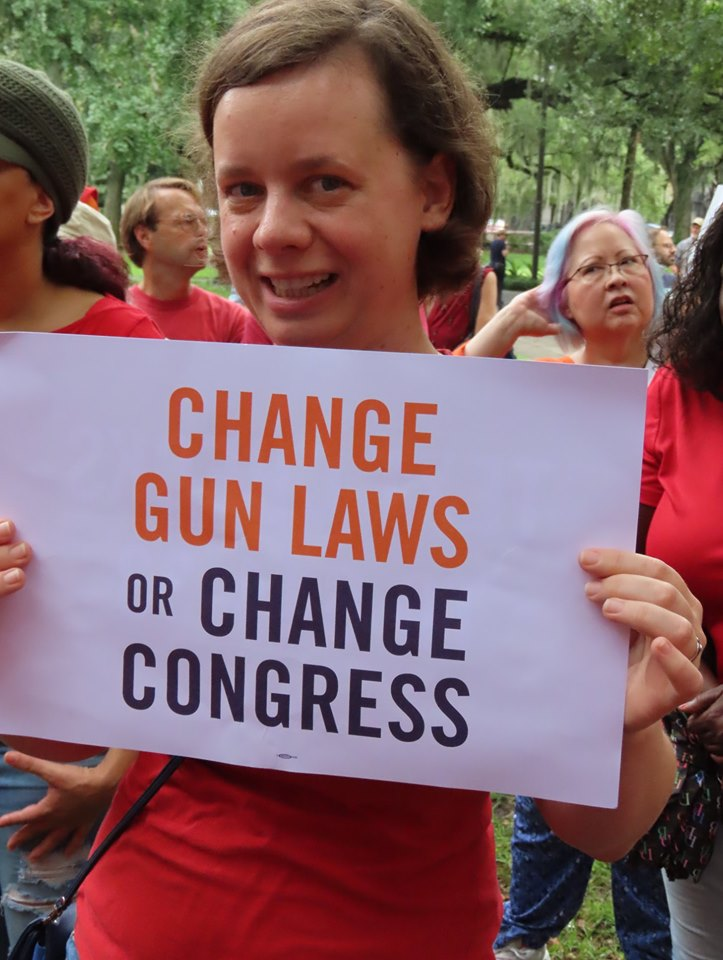 Photo by Kristy Edenfield
An attendee at this past weekend's 'Savannah Recess Rally,' organized in part by Moms Demand Action

The devil, as usual, is in the details.

Gun rights is an issue where the American people tend to hold more nuanced views than the politicians they elect. For example, most Americans do favor more gun control, but don’t want to give up their right to own guns.

Ideally, we’d elect people capable of navigating these nuanced cross-currents. But unfortunately, in a social media and cable news-driven environment, there is strong political incentive to have extreme positions in both directions.

Many times these debates bog down in technical issues — for example when gun rights advocates insist that you need to know the precise difference between a magazine and a clip in order to have the right to an opinion on gun control.

I find that a tedious and unpersuasive line of thinking, like telling someone they have to know how to fix a transmission before they can drive a car.

However, it does seem that if you want to change the law, you at least need to know what the current law is.

And that’s another place the debate often breaks down, and where the mainstream media has utterly failed in its job of informing the public.

I’ve lost count of how many reports on the gun debate I’ve seen where the reporter has no working knowledge whatsoever of the laws they’re reporting on.

Here are just a few examples of widespread misunderstandings which make it even more difficult to reach consensus on this already contentious issue:

• The gun show loophole. In my experience, 9 out of 10 people incorrectly think this means you can buy any gun you want at a gun show without a background check.

But to buy from any licensed vendor at a gun show, such as the increasingly controversial gun shows at the Savannah Civic Center, you absolutely have to be able to pass a federal background check.

Private sales, however, aren’t covered — and that’s what the gun show loophole is. Closing it would mean requiring all show sales, by vendors and by private individuals, to go through background checks.

• “I heard on the news that there aren’t mandatory background checks at all.” I don’t doubt that you heard that on the news. But it would be incorrect.

We’ve had mandatory background checks in this country for a quarter century — Google “Brady Bill” or “Brady Act.”

The Brady Bill’s mandate, which eventually resulted in background checks by all licensed gun dealers for handgun purchases, passed Congress in 1993 and was signed into law by President Bill Clinton.

That time frame also happens to coincide with the beginning of the steady decline in the U.S. homicide rate, which continues through the present day even in an age of increasing mass shootings.

By 1998, these mandated checks began going through the National Instant Criminal Background Check System, and were expanded to include long guns.

When people call for universal or expanded background checks, it is chiefly private transactions which would be affected by such an expansion.

• “You can buy a gun on the internet with one click.” It’s absolutely true that you can purchase firearms on the internet. But it’s not exactly like Amazon.

If you’re buying from a dealer, that firearm will first be delivered not to your door, but to a Federal Firearms License holder who will handle the transfer. And — you guessed it — you have to be able to pass a background check to take possession of that firearm.

(There is an exception for what are called “Curio & Relic” firearms, which can be delivered to your home, with the ATF deciding what’s eligible. But you have to have a special license for that, and – you guessed it – you have to pass a background check to get the license.)

• “Civilians shouldn’t be able to have automatic weapons.” Hard to argue with that. But they already are essentially banned from individual civilian ownership, thanks to sweeping federal laws in 1934, 1968, and 1986.

This is one of those sometimes tedious technical issues. But fully automatic guns — what most people call machine guns, that keep firing as long as you hold the trigger down — just aren’t something you can waltz into a Walmart and buy. And they haven’t been used in any mass shootings in the U.S. (yet anyway). The Las Vegas shooting in 2017 used what are called “bump stocks,” which have since been banned nationally.

What most people think of as automatic is actually semi-automatic. Pointless semantic debate? Maybe, but not so much if you’re trying to write legislation.

The issue of gun rights has become another battle in the ongoing culture war in this country, as well as part of the profound and growing urban/rural divide.

The higher the emotions on both sides, the lesser the chance of any reconciliation at all being reached.

It will take honest brokers negotiating in good faith on both sides to reach a lasting, effective consensus — nationally or at home. Unfortunately, those are in much shorter supply than are guns and ammunition.