A grand SLAM of a day

CHARLIE ELLIS is a passionate advocate for art in our community, and he’s taking big steps to enrich that community.

Take that modest estimate and double it: SLAM had 60 exhibiting artists in its first year and so many attendees that Ellis couldn’t count them all. It was, pardon the pun, a grand slam.

This year, SLAM returns for its second year on Sat., Feb. 29, with even more artists slated to attend.

Ellis began planning for this year’s SLAM in October, though he didn’t intend to begin that early. He had artists from last year contact him asking about the next event.

“I sent out my emails and said, ‘Please forward,’” shares Ellis. “Somebody came back to me and said, ‘I forwarded it 347 times.’ Another one said 91. It spreads—those people will tell other people. It’s going to be a big event.”

For this SLAM, Ellis estimates that 30 artists are returning, but 40 are new this year, which is a sizable increase in new participants. That’s a strong testament to Ellis’ efforts of getting the word out.

He brought on artist Debra Miller to help with getting the word out, and SLAM added Starlandia as a sponsor this year.

Part of what makes SLAM so special is that Ellis stays very true to his vision for the market. 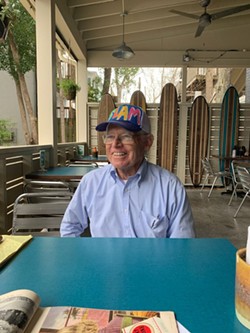 Charlie Ellis, the man himself.

“I want to keep crafts out of it,” he says. “I wanted to keep it as arty as possible. I turned down a few people that had knickknacks. Early on, I would take most anybody that came along, but then I became more selective.”

SLAM is one of the only true art markets in Savannah in that it doesn’t accept craft vendors. There are plenty of craft fairs and markets, so while there’s no offense meant to those makers, Ellis’ selectivity keeps the focus on fine art, which is what he intended when creating it.

Another intention of SLAM is to help the artists network with each other. Savannah enjoys a thriving, inclusive artist community, and there’s room for anybody to join in.

“When the artists come in, they’ll interact with each other and go home with eight or 10 new best friends,” says Ellis. “There’s a network, and a lot of them will say, ‘I’ll come, but you’ve got to put me next to so-and-so—I don’t want to be by myself.’ I can do that, not a problem.”

In fact, there’s so much networking and reconnecting happening at SLAM that it almost overshadows the art itself.

“Somebody told me last year that they had one complaint: they start walking around looking at the art, and they run into somebody they hadn’t seen in ten years, so they had to stop and talk and never made it all the way around,” remembers Ellis.

There’s no doubt that SLAM is good for checking out the artists creating things in our community. That’s exactly what Ellis hoped for when he dreamed up the event.

“I put a lot into it, and I don’t get anything out of it. I did this not for me, but for the art and the artists,” says Ellis, “for them to have a place to offer their art, and to find out if what they’re doing is headed in the right direction. If nobody is interested, then they’ve got to change directions, if they’re in it for the money. It’s a test. If other people take them home and they take some of the other people’s money, then they’re doing the right thing. If that doesn’t happen, then they look down the way and see who’s doing it and they change directions.”

This year’s SLAM features live music by the Crabettes and a few food trucks, as well as the SLAM Creativity Awards. Anybody, exhibitor or not, can enter the contest by making a creative object that incorporates the SLAM logo. Four winners will be chosen—two men, two women—and will receive a $50 gift card to a mystery restaurant.