SAVANNAH’S STARLAND area has undergone quite a transformation in recent years. You might even say that the shifting character of the area could be associated with the Norse god Loki.

That’s the namesake and culinary brainchild of chef John Benhase. The food truck finds itself parked in Starland Yard with patrons, drinks in hand, waiting in line for the new roaming food spot.

Executive Chef John Benhase is the driving force behind the food, but he also hopes that the future, as Loki allows, will include menus inspired by his partners. 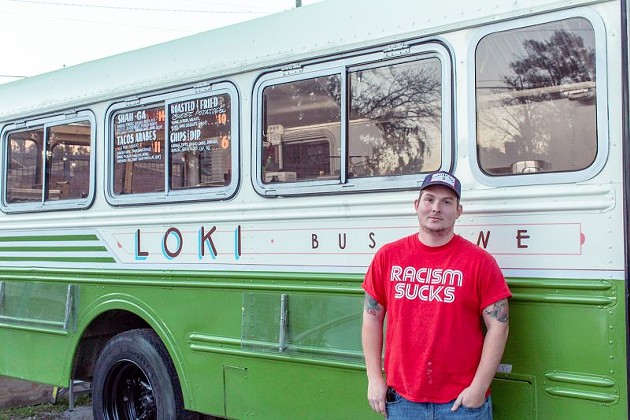 “The plan was always to have our own truck. One, as a fun outlet—a side project for me so I could keep cooking. Two, so we have a space for our own in Starland Yard. We wanted to be an incubator pop-up space as well,” Benhase explains.

With each new Chef, Benhase plans on cooking side-by-side with them, which will only drive the creative process more. 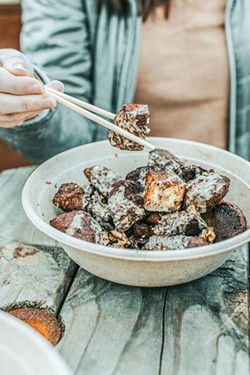 Loki is a god that can shape-shift. “It’s a succinct, copout way to kind of do whatever we want,” Benhase says.

The idea behind the name is the ability to change both with the needs of Starland Yard and Savannah foodies. Starland Yard serves as Loki’s base while giving its owners a creative outlet beyond the Yard.

By forgoing a definition of the truck’s food through its name, theme, or decor, the kitchen maintains the ability to constantly evolve. It is stuff that chefs dream of, the ability to cook whatever they want.

In a small Southern town like Savannah, it’s rare to find a menu that is as versatile and different as Loki’s. Loki’s first menu takes inspiration from Israeli and North African cuisine. Which is, as far as I know, the first time a menu of its kind has been available in our city.

For Benhase personally, the direct correlation between his Atlanta roots as a Chef and Loki lies with Yalla, a Middle Eastern restaurant in Krog Street Market. During his time in Atlanta, he explains, “I got pretty hooked on those flavors. I love food that I have never heard of before so I was like I am all in on this, it is so cool.”

While cooking up a storm in Atlanta, Benhase next went to cooking at The General Muir which is essentially a modern Jewish deli with seating for dinner at night. The flavors he experienced there have proven very applicable to the expanding vibes of the Starland District.

According to Chef Benhase, the food is “mostly about my discovery of these flavors that I have never heard of before and them kind of blowing my mind. Like, Amba. Amba is a fermented mango hot sauce. You think mango and hot sauce and you kind of think Carribean, and fish tacos. It is funky, sweet, and really hot, and then it is like a turmeric, curry vinaigrette base. It is bright, acidic, funky.” 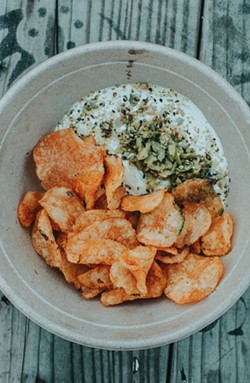 You can try Amba yourself by ordering the current menu’s Harissa Shrimp Pita. According to Benhase, Amba checks all of the appropriate boxes due to its balance in flavor.

“What I will do with this, and probably what we will do with most menus, especially from a street food capacity, is put a ton of technique and time into all of our ingredients and then present them in a way that they all make sense together,” Benhase tells me.

Winter Green Fatoush is a solid representation of the kind of flavors and textures that Benhase is trying to bring to the newish shipping container hotspot.

I have heard the most buzz about the Za’atar Fries. Za’atar is a mixture of spices or herbs that can be found on the plate of most middle eastern fair. Loki takes the time to craft their own mix, even adding an addition or two to make the mix its own. The fries are generously tossed in a layer of the spice and served with a tahini aioli and harissa ketchup.

Much buzz has also come from the Fried Halloumi Cubes. Halloumi is a semi-hard cheese made from a mixture of different animal milks. As it does with anything else, frying these mixtures of dairy delicacies puts the cube cuisine on another level. The salty-rich beautiful succulent squares are a perfect treat for any growling belly.

The Sabich Pita is a reinvention of the classic version, but not too far gone. The traditional version includes hard boiled egg and fried eggplant stuffed inside of a pita. Loki’s upgrade has fried egg, baba ganoush, Za’atar, smoked beets, labneh, and preserved lemon. This kind of mosaic of flavors is what sets Loki apart from other ethnic-centric restaurants.

Hopefully the wheeled wagon of tasty temptations will blossom into a bigger and more permanent structure, but for now, you can find the musings of Chef Benhase parked conveniently at Starland Yard most of the time.