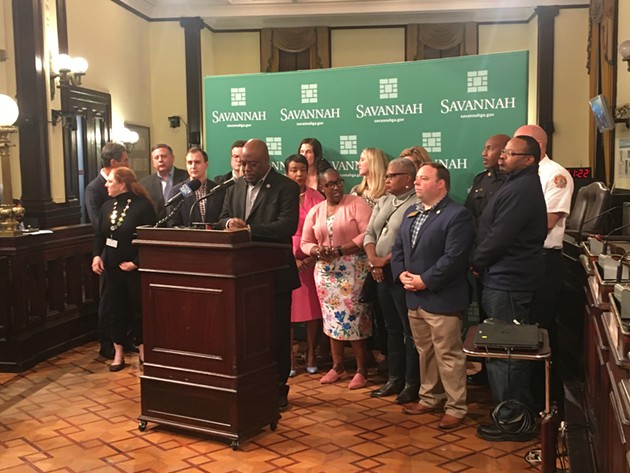 WHILE downtown Savannah will be "open for business" this St. Patrick's weekend, in the words of Mayor Van Johnson, the world-famous parade has been canceled, along with the City's "official" celebration the weekend prior.

Scheduled for Tuesday, March 17, the Savannah St. Patrick's Day Parade will not happen due to concerns about the possible spread of COVID-19, the coronavirus.

The "Festival of St. Patrick," scheduled on and around the waterfront for Fri-Sun., is also canceled.

However, visitors are NOT discouraged from coming to party, shop, or otherwise visit on their own if they so choose or don't want to cancel existing reservations.

Local bars WILL be allowed to be open this Sunday, as previously planned, and anywhere that wants to feature live music, as they usually would, is free to do so as usual.

"In collaboration with our partners and out of an abundance of caution for public health, safety and welfare, Savannah's St. Patrick's Day festival and parade will not go on as planned," said Mayor Johnson at a Wednesday evening press conference.

"The situation across the country is changing quickly. The risk in Savannah remains low, but we want to ensure we're doing everything we can to keep those living in our city safe and healthy," he said.

But the Mayor also said that he expects this Saturday, March 14, otherwise to be active, vibrant, and "just another Saturday in Savannah."

Johnson said he and other members of City Council got a real-time look at national preparations for COVID-19 while at a National League of Cities conference in Washington DC over the past few days.

"The entire time the top of the discussion was the virus and how cities were reacting to it," Johnson recalled. "While we were there some of these council members and mayors in other cities were making these decisions" to cancel various events, the Mayor said.

"It just got to a point of asking, do we want to take this risk?" he said. "Admittedly, these have been some of the hardest days of my life as I wrestled with a decision that I have been vested to make. A decision that would make people unhappy and upset no matter what the decision was. We were between the proverbial rock and a real rock."

That said, "we want to make it clear our city is still open for business," the Mayor clarified. "People will still be visiting this weekend, and businesses have upped their game to provide the safest experience possible."

There was no member of the St. Patrick's Day Parade Committee present — the private organization which sponsors the annual parade. Johnson and City leaders met with the Committee earlier this afternoon to inform them of the decision.

While there were reports earlier in the day that the parade was "postponed," there seems to be no movement toward an alternate date as of this time.

Savannah Police Chief Roy Minter said "Nothing will change in our status other than we won't have to prepare for the parade."

Police will still maintain a high presence all around the downtown area, as in a normal weekend. Earlier rumors of a proposed curfew, however, are NOT true and were debunked at the news conference.

The City of Savannah will still pick up trash and provide all usual services during the weekend.

"We will make it through this. We've been here since 1733. We've seen a lot of interesting and strange things happen. But we will only get through it by working together," concluded Mayor Johnson.