AFTER 17 YEARS (and longer, including the Velvet Elvis years), The Jinx is closing its doors. The celebrated music venue has survived the ups and downs of the Savannah music scene over the course of that time, and has weathered many storms as well. They’ve hosted almost any band you can think of whether local, regional, or national.

They’ve become the home base for local bands like Black Tusk whose careers have exploded past the city limits, and there’s no doubt that they’ve played a role in at least a few stories in many Savannahians’ lives.

“It would be hard to actually put a number on the amount of times myself or Black Tusk has played at The Jinx or the Velvet before that,” Black Tusk’s Andrew Fidler tells Connect.

That seems to be the case for many, many bands in the area.

“Too numerous to count,” Kevin Rose of GAM and Superhorse says.

“From opening the space as a music venue when it was Velvet Elvis to playing the The Jinx’s 15th anniversary party, the space has been the stage of choice in Savannah for projects I’m involved with.” 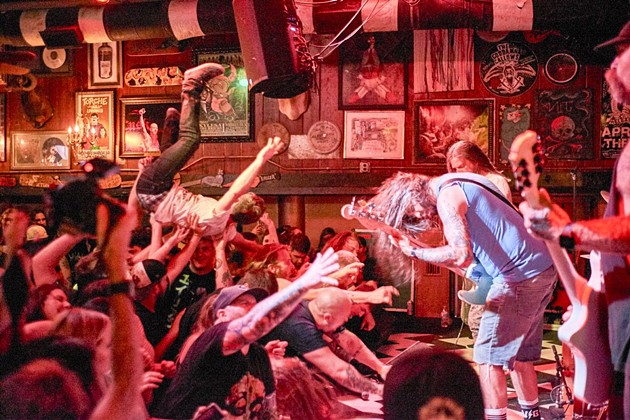 Every Time I Die at the Jinx. Photo by Andrew Von Goellner.

Almost inevitably, due to the economic hardship of the COVID-19 pandemic, The Jinx will be closing the doors at 127 W Congress St., with the promise of ultimately opening a new space at another location. It’s truly the end of an era for a venue that is perhaps more legendary than any other that has existed throughout the city’s history.

“I’ll remember it as The Velvet Elvis and The Jinx. Even whatever comes next, that building will always be remembered by those names. For me, I feel like I partially grew up there spending a few years booking bands and performing in my old band in the early 2000’s,” AURA Fest’s Tim Walls tells Connect, adding that he’s seen, played, and booked countless shows there over the years.

“Some of the bands I’ve had the great pleasure seeing in that building include Hatebreed, Kylesa, Baroness, Coheed and Cambria, Fall Out Boy, Bayside, Underoath, The Casualties, Superdrag, Zao, Voodoo Glowskulls, Torche, Mastodon, Every Time I Die, and so many more.”

The earliest days of The Jinx, starting in 2003, were full of camaraderie and some serious fun. Friendships were solidified there—ones that remain to this day.

“You could go in at any point of the day/night/week and one of your friends would be bartending and other friends would be there ready to talk and hang out. We all practically lived there back then. I have formed lifelong bonds with people there, and it’s the place we all go when a friend of ours passes on to celebrate their lives because it’s a space that we all have in common,” Fidler says.

The reputation that The Jinx has cultivated over the years is thanks, in part, to its involvement in the early days of things like Savannah Stopover Music Festival—which has now become a staple in the local scene.

“There wouldn’t be a Savannah Stopover without The Jinx. They were the first venue to say yes to the idea in 2011 and have been an integral part of the festival every year. It wouldn’t be Stopover without a line snaking down Congress street with people waiting to get into The Jinx,” Stopover founder Kayne Lanahan tells Connect in a statement.

“There isn’t a band on tour (or local!) that doesn’t love the vibe of this room from the minute they walk in the door and we were lucky over the years to get some bigger draw bands into this space that normally won’t play small clubs because of The Jinx’s legendary reputation.”

Lanahan says some of her favorite shows at the venue include ones from The Mountain Goats, Charles Bradley, Blitzen Trapper, and J.D. McPherson, to name a few.

“So many Jinx moments and stories and friendships. We wouldn’t trade one of them—they have just been incredible to work with and amazing partners. We’ll be there when they re-open; whenever and wherever that may be,” she adds. 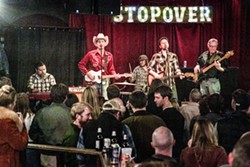 Damon and the Shitkickers at Savannah Stopover. Photo by Geoff L. Johnson.

All of that history begs the question; for those who have graced the stage, what show stands out the most?

“The show where we (GAM) dropped onto the stage through the ceiling and took over our imposter band and then did a call and response with them when they started playing in the front window,” Rose says.

“Also, opening for The Dead Boys in 2018 was pretty amazing.”

For a venue that has been so embedded in the history of Savannah for so long, there’s a legacy at 127 W. Congress that will never be erased—no matter what occupies the space next.

“The musical history in its foundation is nearly 3 decades deep,” Walls says.

“It was an incubator of so many great Savannah bands and the adopted parent of so many amazing souls. It was more than a music venue and although this may sound simple, those of us who know it will understand: it was a home,” Rose adds.

“The Jinx helped define my generation just as the Velvet did the generation before us. Ben Carter and those that followed him have done irreparable damage to local business downtown, bringing in the chains and tourists and pricing out the locals,” Fidler says. “That’s what’s happening to the Jinx; I can’t wait to see what trash the new owner puts in there.”

“I hope a new midsize venue opens up soon, but this could be it for a venue that caters to underground music in City Market/downtown for a while to come. The Jinx was the bastion that weathered every storm, but coronavirus and the greed of the building’s new owners finally put the last nail in the coffin for the room that we have come to know and love as The Jinx on 127 W. Congress St.,” he adds.

“So raise your glasses and have a drink, and we will close this chapter on Savannah’s music scene and start writing the next.”