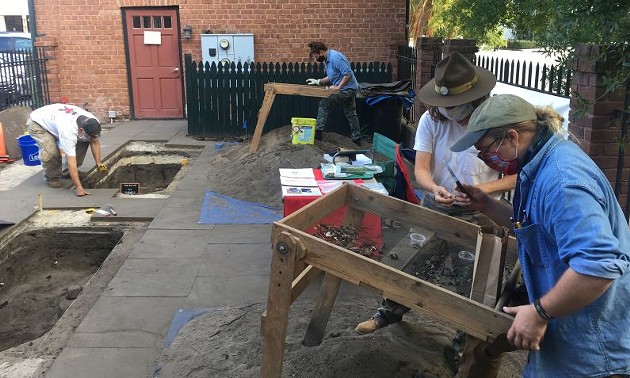 Photo by Jim Morekis
The LAMAR Institute’s dig was behind the HSF-owned Kennedy Pharmacy on Broughton.

The building, owned and operated by Historic Savannah Foundation (HSF), is slated to have work done on its patio area just across the lane from the Davenport House. The pending work prompted the small archaeological project in the patio.

The project consists of two main excavation pits, chosen by their potential on the basis of results from ground-penetrating radar.

“There’s a lot going on in these two little excavations,” says Rita Elliott, education research coordinator and research associate for the LAMAR Institute, which is overseeing the dig on behalf of HSF.

“You could just dig holes and find the same artifacts we’re finding, but the information won’t mean much unless you document everything. It’s like a crime scene — once you mess it up, you can’t really solve the crime,” she says.

“It’s important before you do any work on a site to understand what’s underneath the ground so you can document it,” says Jamie Credle, executive director of the adjacent Davenport House, also an HSF project.

“In Savannah economically, we base our tourist industry on history. So understanding what really happened is a whole lot more interesting than just making it up. History is important, and it never stops,” Credle says.

So far, the LAMAR team has found artifacts behind the Pharmacy in distinct layers ranging from the 1700s to the early 20th Century. They include the remains of a child’s tea set, bottles, butchered animal bones, and a quite lifelike lead toy revolver from around the 1930s, inlaid with a single rhinestone. 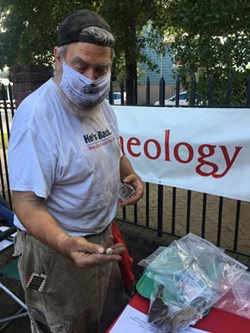 The team are particularly happy to have discovered an excellently preserved portion of a bottle of “Anti-Migraine” headache medicine almost certainly sold in the Pharmacy. A large painted mural advertising the medicine is painted on the side of the building, facing Habersham Street.

Perhaps the most fascinating and mysterious item, however, is a British musket ball from the colonial period.

“This could be from the Siege of Savannah — that’s as good an explanation as any,” says Dan Elliott, president of LAMAR Institute.

“There was no house here when this ball was here, these were farm lots. It could have been fired from the fortified city toward the Americans and French that were out here.”

In the failed Siege of Savannah in 1779, the British successfully defended Savannah from an allied force of Americans and French. It’s best-known as the battle that cost Count Casimir Pulaski, namesake of many local monuments, his life.

The musket ball, Dan says, is the wrong caliber to have been used in a standard American or French infantry weapon of the time.

As is often the case with archaeology, the team spent much of its time literally digging through trash. 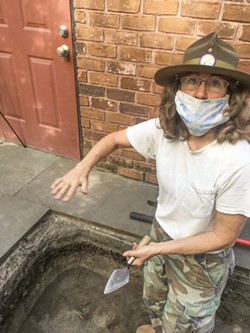 Photo by Jim Morekis
Rita Elliott explains the many layers of the excavation.

“There are several trash heaps back here,” Rita Elliott says. “One pit was just full of animal bones — birds, pigs, cows. A lot of them were sawed, with clear butcher’s marks. That helps us determine the diet of the people in the area.”

There’s a layer of more recent industrial slag probably intended to level the lot, possibly brought in from the nearby Kehoe foundry.

Animal bones are sent to zooarchaeologists for more research. Pollen and plant remnants are also sent off for study.

“That can tell you what the people were eating and what the environment was like,” says Rita. “Was it wet, was it woody, was it covered with weeds? 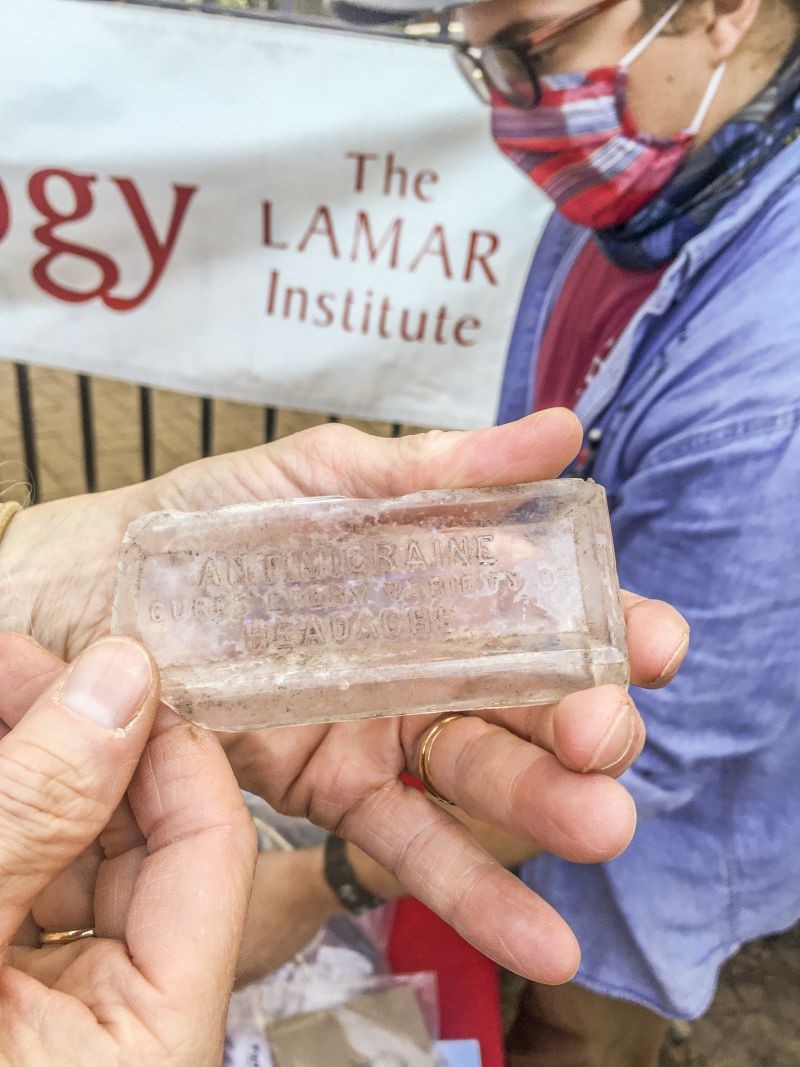 Ironically, though the City of Savannah recently adopted its first-ever archaeology ordinance — requiring development projects on public property to undergo archaeological research before they can begin — the ordinance doesn’t apply to this project since it’s on private property.

“This is another instance of Historic Savannah Foundation, showing by example, how archaeology can provide unique historical information about the past without hindering renovations for the future,” Rita Elliott says.