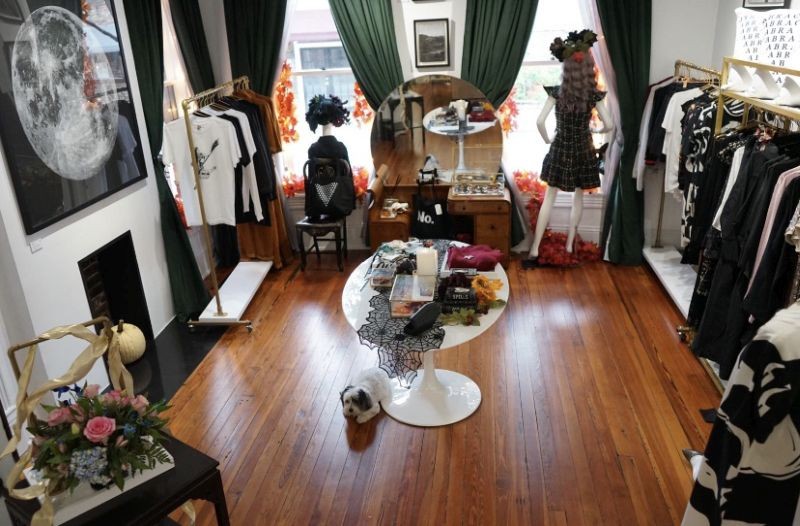 Gorgeous sunlight hightights the clothing and art from around the world.

A humble grand-opening, on the first Saturday of autumn, did just the trick by bringing a treat to the heart of Savannah’s design district. Stonelord’s, a new contemporary art and clothing shop is now open, and it invites in the magic of the "spooky season" with its debut art exhibit, "The Season of the Witch."

The owner, Rosalie “Roz” Morris, curated the shop to look like an art show, and right now the show is “The Season of the Witch,” featuring Atlanta-born, Brooklyn artist, Benn Fennell. Fennell sets the mood with his eerie, black-and-white chalk drawings of the moon and the sky behind silhouettes of trees.

“Chalk on black paper has been my favorite for the past 10 years, and I have focused exclusively on that,” Fennell said. “The confusion of chalk on black paper dazzles me. The image reads as positive, the medium suggests it’s negative, but the inversion is false. So the still image hangs there, vibrating between the paper and the mind, between right-side-up and inside-out. That is a gratifying mental somersault.”

Of Fennell’s five works on display, four are works that Fennell had recently completed in his spare time, but the fifth work, a 48x48” drawing of the moon was personally requested by Morris.

“I would love more people to see his work because it’s really painstaking work. What he’s drawing looks like a photograph, but it’s actually white chalk with tiny streaks on the paper so it creates this really amazing 3-D effect,” she said.

Fennell’s stunning silhouettes encourage the witchy tone, but they do not carry the show alone.

Other featured artists’ fashion lines are on display including a jewelry line, Hireth; a clothing line by a local designer, Sayler Made; a t-shirt line, Delicious Languor, and more.

Morris plans to rotate the displayed artists and designers for the theme of each new show. She keeps her eyes open for talented, independent artists, typically of smaller brands, providing exclusivity on many of the shop’s items. Featuring clothing lines from all over the world, Morris brings a global sense of fashion and art. She also keeps the truly important details in mind when searching for talent.

“Many of the brands are sustainable, ethical and environmentally friendly,” she said.

Though Stonelords is a new shop, the curation and distribution of art is not a new venture for Morris. Morris, who received her AAS at Parson’s School of Design in NY and a BFA from Atlanta College of Arts (which is now SCAD Atlanta), is a Savannah-native who has spent the last 16 years in NY before coming back home to open the gallery shop. While in New York, she developed a clothing line, did many pop-up shops, solo shows, and cultivated relationships with the art community. Her goal is to bring that diversity to the creative community of Savannah.

“I’ve always wanted to be able to come back home and create a really unique space that engages the arts community but also brings in artists and designers that I like,” Morris said.

After years of searching, Morris found a beautifully revitalized brick townhome that was originally built in 1880. Allegedly, it was historically built by a German family, purposed as a live-work space, and the place has continued to serve its purpose. Even before Stonelord’s opening, the townhome was an art gallery.

Morris has many plans for Stonelord’s that are currently delayed due to COVID-19. Morris’s future plans include hosting musical and other performance events, trunk shows with designers, some workshops, artist talks and poetry nights.

While much is in store for Stonelords, Morris is working on the next show, “All that Glitters,” which will be themed with bright, glittery and golden designs.