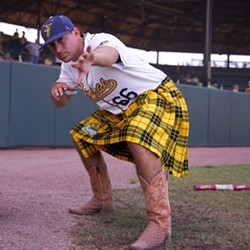 Courtesy of the Savannah Bananas

It’s good to be top banana, and along with being the Savannah Bananas head coach for the third straight year, Tyler Gillum is also Connect Savannah’s Best Local Sports Coach.

“If I won any coaching award, it’s because we had good players, that’s for sure,” Gillum said. “The first thing is to always recruit good players and get to know them. It’s about caring for people and helping them align their goals with what we’re trying to achieve with the Bananas.

“This summer, we had an unbelievable group of guys who came to us to play during the pandemic – we put together a good plan for them to continue playing baseball and do it safely, as well. A major high five to our players! We had a phenomenal group.”

Gillum is a baseball coach and professor at South Mountain Community College in Arizona; throughout his career, he’s coached baseball every summer in locations across the country. He’s been with the Bananas for three seasons, having joined the team after prior head coach and friend of Gillum’s Sean West left to spend more time with his family.

“Sean called me and said that he thought this would be a good opportunity for me, that they’re looking for someone who can think outside the box and help them build a culture,” Gillum explained. “So I interviewed with the front office, and just hit it off with our owner, Jesse Cole. And it’s been a happy marriage ever since!”

While of course the Bananas want to win (and win, they do) – Gillum also fits right into the culture of Fans First Entertainment.

“One of the first thing I heard about the Bananas is the philosophy of if it’s normal, do the exact opposite,” he said. “We do a lot of that! We’ve just got to entertain, always. We put the fans first. Our thing is, every single night at the ballpark is somebody’s first night, and we want to create those ‘never forget’ moments.”

“I think the biggest standout moment of our opener was just the fact that we brought back some normalcy to people’s lives this year, including our own as coaches and players,” Gillum said. “My example would be – we shut down at my college on March 14 and weren’t allowed back on campus, so our baseball season ended. For us players and coaches, that’s what we do every single day, so not having baseball and not being around our teammates was a big change.

Gillum does plan to be back for the 2021 season, but in the meantime he’s got plenty to keep him busy – along with his day job, he and his wife recently welcomed their first son to the family. And when not thinking about baseball, he enjoys reading and watching documentaries.

When in Savannah for the Bananas in the summers, he likes to hang out at Tybee Island as well as try out the many restaurants the city has to offer.

“I just want to thank all of the fans for showing up and supporting us, especially during a pandemic,” he said. “It was awesome having fans there this summer. It made a huge difference. I can’t wait to get back next summer and have another great year!”