Mind and methods of local artists 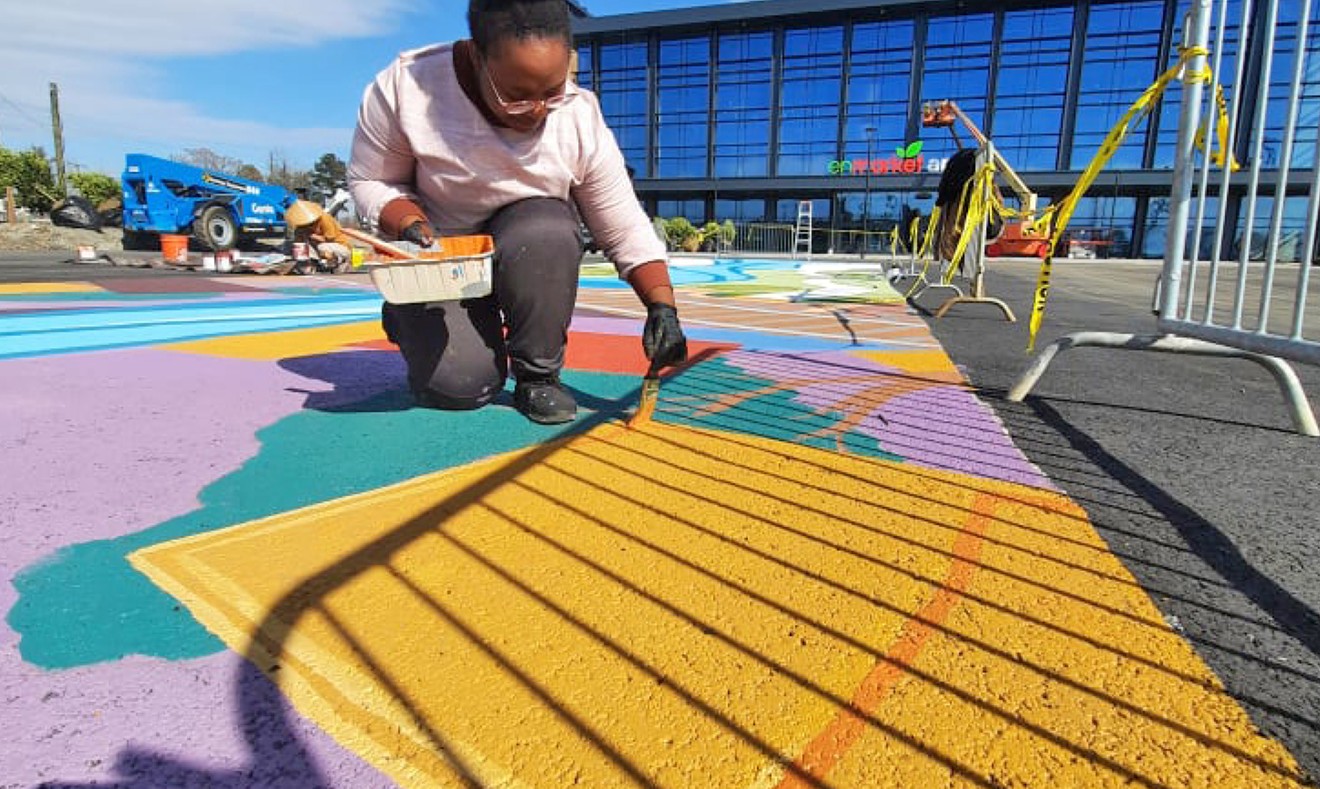 The EnMarket Arena is now open and full of life, as big-name acts have already started packing the seats at the newly opened building.

Adjacent to arena’s entrance and the developing Canal District will be the Water Works Pedestrian Walkway Mural. “This mural is quite historic in not only its size but the opportunity to represent the incredible creative talent Savannah has to offer,” Stuart Miller, director of the City of Savannah Department of Cultural Resources, said in a news release.

Now the first team of artists are well at work on the first part of the mural. Team “The River Runners” consists of Alfredo Martinez, Xavier Hutchins, Brian MacGregor, and Nae’Keisha Jones. The artists are from different backgrounds, but came together for this purpose, and their love of art and the Savannah community.

“We definitely knew of each other for sure before teaming up for this. Xavier had been doing some murals around town. I’ve run into Brian a lot throughout the years at different community events like A-Town Get Down and I have run into Nae’Keisha here and there but this is the first time we’ve ever worked together,” said Martinez.

Given the mural’s significance to the site and its neighboring communities, it was required that the artwork incorporate the theme of “Savannah’s Pathways,” which can be taken from physical pathways such as roads, nature trails and man-made paths, as well as the structures, natural and/or man-made, that line those physical pathways.

“The Canal District was a big part that the city wanted us to include. We included that famous archway part where you get on Louisville Road. We put that in with the railroad, too, because that brings in pathways as well,” said MacGregor.

“We incorporated some cobblestone-kind-of pattern into it as well. The river is really the focus of the whole thing. Going down the middle is the river opens up from the beach and then opens up again at the bottom where it’s going to connect to the next mural that will pick up from there. This way it should flow along,” said Martinez.

“It’s very interactive. We’ve got things in there that people can interact with as they walk through, and there will be a plaque that describes what each thing means as well. For example, we have red doors, which symbolize home ownership, and there’s a lot of them downtown. Some people wouldn’t know that whether they’re from here or not. It’s that type of symbolisms that will be described in the plaque,” said Jones. 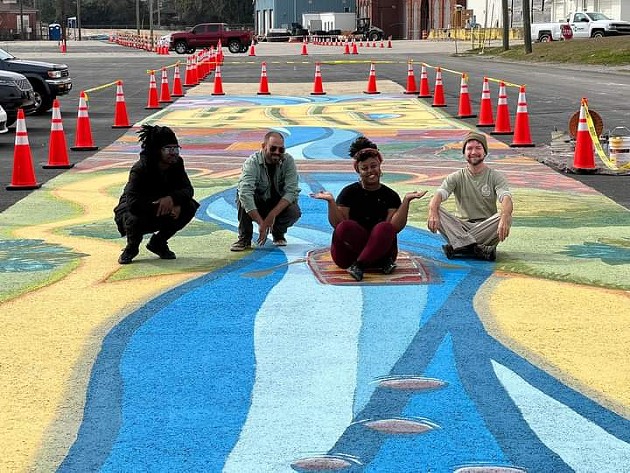 The neighborhoods surrounding the arena have been here for decades. The artists and City of Savannah believe the best way to welcome the mural and the arena is to have the children and others in the community be a part of it.

“We’re involved with as many people around here as we can, and we’re collaborating with [the] Deep [Center], getting some of their kids out here. They’re going to be learning a little bit about murals and doing art for a living. We’re going to be doing some other work with them as well,” said Martinez.

The Deep Center is a local non-profit organization that aims to help empower young people by working with local artists, community leaders, and more. These children will have the opportunity to see what it’s like to be a muralist.

Children from neighboring community Carver Village and some groups from area elementary through high schools got to the chance to come in doodle and learn more about the mural and give their input. The artists even met with community leaders to go over plans for the mural as well.

“We tried be as open-minded and inclusive about this as possible, because this is a huge development in somebody else’s neighborhood, and you don’t want to just show up and do whatever you want, get your check and leave. That’s not the spirit behind this,” said Martinez.

Jones has lived in Savannah for a long time and she is proud of the mural project. She described growing up watching artist and how she would see murals all the time, thinking she wanted to do that one day.

“I think just having a sense of pride, creating something where I live and this is something that I did and I had a part in doing is great,” she said.

MacGregor wants the mural to be inspirational and enjoyable, and that he wants people to enjoy it by walking around it and taking pictures with it.

“I’ve been doing murals since the mid 90s, but there was a lull for a little while, and all of a sudden it’s exploding like crazy. They are going up all over the place again like they did back in the day,” said MacGregor.

Hutchins believes this mural will help shine a light on future generations of artists. He wants people to be inspired and stay consistent with their goals. Hutchins wants the painting to depict everything about Savannah.

“The cobblestone to River Street, to the Savannah River. All the elements within those, definitely,” he said.

Although the murals will be a temporary installation, each mural will be used for at least a one-year term and will be painted as if permanent.