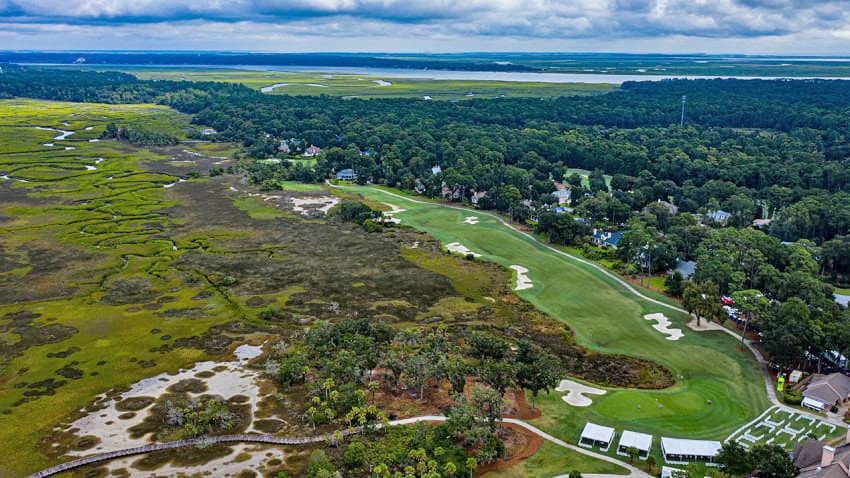 A week before hosting a professional golf event for a fifth straight year, The Landings Club Deer Creek Course is being carefully manicured and strategically prepared on Wednesday, March 23. Throughout the course, and all around the clubhouse, workers are buzzing around in anticipation of the 2022 Club Car Championship at The Landings Club beginning with first round play at 9 a.m. on Thursday, March 31.

The Korn Ferry Tour (formerly Web.com Tour) event began as The Savannah Golf Championship in 2018, when rising PGA Tour star Sam Burns hoisted the inaugural trophy. In 2018, the total prize purse for the 156-player field was $500,000. This year, players will compete over four rounds (cut made after second round) for a purse of $750,000.

In December 2020, the Korn Ferry Tour announced a four-year partnership with Club Car to serve as the event’s first official title sponsor. The tournament, and the course itself, has become a favorite of many players on the tour which serves as a path to the PGA Tour. With 50 PGA Tour cards on the line for the following season every year, the Korn Ferry Tour is where future PGA Tour stars are first seen as pros.

Deer Creek will play at around 7,150 yards for this year’s tournament. It was originally designed and built by Tom Fazio in 1991. It is responsible for hosting Savannah’s only professional golf tour event since 2013, when the Champions Tour stopped playing the Liberty Mutual Legends of Golf at Savannah Harbor after 10 years.

A highlight of the course, which was redesigned in 2009 by Fazio and others, is hole No. 5, a driveable par-4 over water affectionately called “Schooner’s Cove” by players and patrons alike. It is unquestionably the most popular spot for fans to set up shop for an afternoon of watching groups roll through. The green sits between the players teeing off and the elevated platform of grandstands and lounging fans.

Around the back of the hole are food and drink vendors and, in past years, a player recording a birdie on the hole meant discount beer prices at the hole for a specified amount of time. In 2018, Christian Brand chipped in for eagle at the hole early in his first round. “I’m always happy to give (the fans) a reason to drink some suds,” he went on to say after his round.

The public can find out more information about this year’s event, including ticket pricing, a schedule of events, parking information and more at clubcarchampionshipattlc.com.

First round play begins Thurs., (March 31) at 9 a.m. with players going off of hole No. 1 and hole No. 10 for the first two rounds, before the field is cut following the second round Friday evening.

NEED TO KNOW IF YOU GO:

WHAT: 2022 Club Car Championship at The Landings Club