'You can choose almost any sound you want'

BERNIE KENERSON IS a man with a mission. 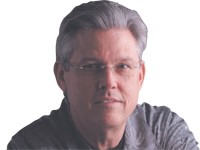 A professional jazz musician for many years, the producer, composer and arranger was born into a musical household. He first took to the clarinet at age seven, and by ten had added the sax. By 13, he was playing the flute as well, and at 16 went pro with a group in his hometown of Ft. Lauderdale. Barely more than a year later, he had joined the U.S. Army, and over the next 14 years, he’d serve as an instrumentalist and arranger for Army Bands.

But now it seems that all these experiences (as well as subsequent music degrees from esteemed schools like Berklee College of Music and Appalachian State University) were merely preparation for the latest chapter in his life. Kenerson you see, has found his calling, and is in the very early stages of a proselytizing ministry.

His message? Embrace the EWI.

What may you ask is an EWI? Well, it’s an acronym which stands for Electronic Wind Instrument. In other words, it’s a device that you blow in —much as you would a traditional horn or woodwind instrument— but which is capable of generating an almost limitless range of sounds.

Think of them as synthesizers played with breath as opposed to fingers.

Despite the fact that these unusually versatile instruments have been around in one form or another for three decades, and that many major artists have dabbled (and recorded) with them, EWIs have never made significant inroads in the music community. Why not? Well, maybe it’s the name, which, frankly, sounds like either a personal flotation device or an Australian cocktail. Or maybe it’s the fact that for some, the notion of making music by blowing into an electronic stick connected to a computer just seems a tad, well, goofy.

And yet, according to Kenerson —who’s performed alongside such jazz icons as Bob James, The Yellowjackets, Jimmy Smith and Gato Barbieri— for serious musicians not intimidated by technology or the evolution of their art form, EWIs are simply “where it’s at.” Given the option, he’d much rather play one of these electronic wind instruments than any of the “regular” horns at his disposal.

“I keep ‘em out and still play ‘em all pretty much once a day to keep my chops up,” he says of his collection of varied brass and woodwind axes. “But for my own music, I wanna concentrate on the EWI. 2008 will mark 30 years that I’ve been playing EWIs. I’ve always loved ‘em and so I made a decision that I wanted to showcase that.”

“I’m bringing the EWI to the forefront. I think they’re great and there hasn’t really been anyone who’s decided to seriously make it their main instrument.”

Kenerson says that quite a few jazz artists play and record with EWIs, but usually only in small doses.

“They’ll use it for a little color here and there or for a piece of a melody. Maybe for one song an album. But the instrument itself is so rich with possibilities that it needs to be out front. I’ve always been a multi-instrumentalist and wanted to play more than one thing. In the past, on jazz gigs, I’d show up with five or six instruments. Piccolo, flute, tenor sax, baritone sax, clarinet.

“So the nice thing about doing my thing and my music with an EWI is that I have a palette of different sounds to choose from. They’re all right there. I don’t have to bring an armful of horns and keep up with the reeds and everything else. I’ve grown up with and always liked synthetic and electronic sounds. So, as a horn player, it’s fun to be able to tap into all of that.”

He knows some people dismiss EWIs as less than a “real” instruments, but he hasn’t run into too many EWI haters. Plus, he sees that as mainly a holdover from a previous generation that was in many respects slow to embrace the possibilities of electronic instruments in general.

“By contrast,” he notes, “Michael Brecker —who recently passed away— was one of the best jazz musicians that ever lived, and he embraced EWIs. He was a real innovator, and did a lot of unique things with them. Time has come for it to be accepted as a viable, deserving instrument we all have to pay attention to.”

To that end, Kenerson has recently released an independent album called You & Me (The Art of the EWI), which features the EWI as the melodic lead on every track. Musically, it’s an upbeat mixture of slickly played, feel-good tunes boasting a facile and live acoustic rhythm section of bass, guitar and drums. Compositionally, the album shifts between modern material and more traditional fare, but at all times, his electronic axe is front and center.

It’s a bold statement that’s meant to validate his chosen instrument. And it does.

Kenerson says that for most any wind player, the EWI is not only a wonderful compliment to their standard arsenal, but given the chance, just might wind up being their preferred “horn”.

“It has all the elements needed for great, artistic music,” he enthuses. “Plus, you can choose almost any sound you want. With this new Akai 4000s model I use, you don’t have to plug it into an effects rack.”

According to Kenerson, this brand-new development is a state-of-the-art upgrade in previous technology that has effectively made EWIs virtually indistinguishable in most functional and visual respects from an acoustic horn or woodwind.

“A lot of guys get into wind controllers, which I do as well. I could trigger banks of sound modules, but the horn I use now has a dual-oscillator analog modeling synth engine right on board, with built-in effects. So, when I go wireless, I’m not tethered to anything! I’m essentially as free with this EWI as with an old-fashioned, acoustic horn. I’m even freer than if I was using a traditional horn with a clip-on mic.”

If anyone is in a position to comment on the evolution of the EWI, it’s Kenerson, who became intrigued with the potential of this new breed of instrument from the start, and has been a devotee ever since.

“That first one was called the Lyricon, and I played one back then. It was totally electric. No chips, and it was not digital. There were plenty of transistors. You’d open it up and the guts were full of wires!”

Up until fairly recently, the Myrtle Beach, S.C. resident had a full-time gig playing seven nights a week at a dedicated jazz venue in that popular tourist town.

“I was the musical director for their house band,” he recalls. When that venue closed, he saw an opportunity to, as he puts it, “keep the momentum going,” by devoting all his energy to composing original material and hitting the road with his own group.

“The CD is getting a lot of airplay. We’re on 92 stations in 34 states and nine different countries! My CD has been heard on Savannah State’s station 90.3 FM. What’s fun about having my discs for sale online is going to CDBaby.com and seeing that someone from Barcelona or Japan has ordered one. That’s really exciting.”

Kenerson has played a few gigs in Savannah over the years, but he’s always been acting as a sideman to someone else. He considers this upcoming date at Jazz’d as his official debut in our market.

“The show will mostly be original material from the current CD, plus some new stuff from the CD that should come out next Spring,” he explains. “I sprinkle in a handful of covers and standards. There’s a Monk tune we’ve modernized, and a John Scofield tune we love to jam on. There’s also a couple of Coltrane tunes that work very well on the EWI. I’d like to think that if Coltrane were around today, he’d have really gotten into EWIs.”

To anyone unfamiliar with the sounds of EWIs, but who might be considering making the show, Kenerson has these words of encouragement: “I’ve got a great sounding band that’s both fun and entertaining. It’s very accessible stuff. If you’ve never seen someone play the EWI, it’s really a joy to hear. We’re at a point in time where it’s nice to have something that just sounds fresh, you know?”

“The cool thing to me about the EWI is that it’s got a newness to it, but there is a familiarity there as well. Because the basis of the thing is in analog sounds that have been with us for a while. This is just a new twist in the horn player’s expression.”

The Bernie Kenerson Group plays Jazz’d Tapas Bar Friday at 9 pm. There is no cover to get in. More info and music samples at: www.berniekernerson.com.