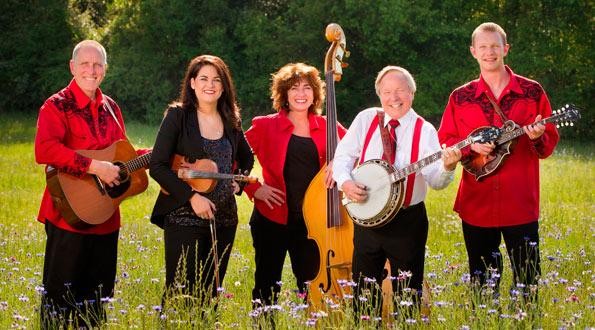 Randy Wood has known Little Roy Lewis for close to 30 years, since he was the young, banjo–playing cutup in the Lewis Family gospel group.

Since 2009, Randy’s pickin’ parlor has played host to the Little Roy & Lizzy Show, the bluegrass quartet Roy began after the elder members of the family passed on or retired.

The other star of this old–time bluegrass revue is Lizzy Long, foster daughter to Roy and his wife Bonnie, who live up in Lincolnton, near Augusta. Lizzy is not only a gifted vocalist, she plays a mean fiddle, and banjo, and just about anything else with strings.

When the band formed three years ago, Randy Wood Guitars became one of their second homes. In fact, the Little Roy & Lizzy Show is probably the most successful repeat booking at the Bloomingdale venue.

“They’re great fiends and great musicians, too,” Wood says. “Little Roy is such an outgoing person and such a consummate entertainer. He’s one of the few real entertainers left, I think, especially in the bluegrass field. He kind of reminds you a little bit of the old vaudeville, some of them, they’ll do most anything to get a laugh onstage.”

Schooled by the old–school country and bluegrass showmen, Little Roy is part Earl Scruggs (who performed with the show at Randy’s place in 2010) and part Jerry Clower. His antics hilariously offset the mostly–traditional bluegrass music.

“People like him are fast disappearing from the landscape,” Wood says, “and it’s such a shame — I don’t know any new people that are coming along  that are that kind of entertainer. It’s in their blood.”

We got Little Roy and Lizzy together on a conference call and lobbed a few questions their way.

How did you two get together? How did this start?

Little Roy: Lizzy was born about two miles from us. The first time I saw her, she was about 11 years old, her and her identical twin Rebecca. I used to play music with her granddaddy, back in 1947, ’48, when I was a little boy. And I didn’t even know these girls existed. To make it short, after a while Lizzy became a foster girl to us, at about 14.

She was playing fiddle, and finally one day she asked me what I was doing on the banjo, and she learned how to play the banjo from me, and she’s a professional fiddle player who can play almost any instrument.

When she got old enough to go, I took her on some of the Lewis Family shows for about five years. When she got out of college in West Virginia, she moved to Nashville where she had a couple of bands.

When the Lewis Family had to retire, because we just couldn’t go any more, we got together and decided we was gonna call this the Little Roy and Lizzy Show. And we’ve had real good luck with it.

Lizzy, did you have to think hard about going into the family business, as opposed to making your own way?

Lizzy: When I started playing, I never even thought about doing nothin’ different. Because that was my dream. I never thought about being anything bigger, you know what I mean? I just always wanted to play with Little Roy.

I never really wanted to leave Lincolnton, either. Bonnie put me in the car and hauled me off to West Virginia, because I had a full scholarship. And I’ll guarantee you I still got fingernails left in the floor down here.

You’re very clear about this being a show, not just a band. How did you decide exactly what you wanted it to be?

Lizzy: I played with the Lewis Family for a little while, Little Roy and them, and we kinda already had the foundation. It wasn’t like we had to figure out, how do we do this and that. Little Roy’s been in it 60 years, and you can’t really change him!

I guess a lot of it relied on me, being able to form around what he’s done for years. But I got that pretty good, ‘cause I grew up with them, and listened to the family. I sat on the side of the stage and watched Polly sing, and it was just put into me like that.

With band members, you go through a few of them till you get that click, like family.

I saw an older video of you and your twin sister onstage. She was playing standup bass. You look so much alike, if you ever couldn’t make a gig she could go out as you!

Lizzy: One thing about that, she can’t sing worth a lick! No, I tell her all the time. She can sing a little bit, but it’s not the same, you know what I mean? To be so much alike, we are totally different.

Little Roy: She’s doing great. She’s up in Nashville, and she goes out with different bands and plays for them. And Lizzy got her a job with Tom T. Hall’s recording studio.

Today, there are traditionalists, and there’s progressive bluegrass. How do you guys feel about that?

Lizzy: It’s real good, I like a lot of it. But if it’s not real traditional bluegrass, sometimes people get confused on what’s bluegrass and what’s contemporary music. It’s what Sam Bush labeled Newgrass.

And there’s nothing wrong with that — I love Sam Bush’s playing, I love Mountain Heart and Barry Abernathy, and I like different stuff. I’m very eclectic and kinda like to do different stuff myself.

What hurts is, they label themselves bluegrass and it knocks some of the traditionalists out of the venues that are really bluegrass.

Roy, you’re a musician and a comedian. Has that evolved since the Lewis Family days, or are you doing things exactly the way it was then?

Little Roy: I’m doing exactly the same thing that I was doing 60 years ago. It all started by watching Grand Ole Opry stars. Not just Lester and Earl and all that, but I watched Lonzo & Oscar ...

My picking comes from Earl Scruggs, Don Reno and the black blues people, and I get all my funny from watching Lonzo & Oscar, and Red Skelton, and watching cartoons. That’s where it all comes from.

I had worked with the Chuck Wagon Gang, the Blackwood Brothers and the Statesmen, and I had watched the early quartets and how they would get the job done. We used to be called hillbillies, and we couldn’t get it done. Carter and Ralph Stanley would show up without a bass player, so I would play with the Lewis Family and then play bass with the Stanley Brothers. So I got a double dose.

I stole a little bit of the comedy, and I stole a lot of my actions by watching cartoons and watching Lonzo & Oscar and the Duke of Paducah. I watched them real closely, and then I watched all the gospel groups and how they would project on the stage. It’s the look that you have and the way that you do it.

So Lizzy comes along, and I’m still doing the same parts that I did with my sister Polly and my brother Wallace. With the Little Roy and Lizzy Show, I feel free as a bird because I’ve always tried to slip a little bluegrass into gospel music ... I like to put some old country music into the songs we’re doing now. Even Lizzy is writing some songs that sound like they were written in the ‘50s. I’m out for that sound and the energy that anybody got in the early days.

And I want everything every night to be different. I don’t want to be a polished group. I want us to still make mistakes, which we make plenty of! So everybody will laugh. And the next night it won’t be the same. You go to see some bluegrass groups, it’s so polished there’s no mistakes, and it takes the fun out of the music.

Is he this funny when he’s not talking to the media?

Lizzy: He usually is, twenty–four seven. He’s either this way or extremely the other way – sometimes I pull into the yard, and he’s workin’ on that bus, and I see grease guns flying and hitting the garage door! Even when he’s pissed off, he’s still funny. You just gotta take him like he is.

Little Roy: She’s talking about seeing grease guns a–flyin’. I’m a believer that if I don’t work and do something every day, nothing else will work. (To Lizzy) That’s why most of the time, when you see me driving up, I’m under the steering wheel. Because I like to go, and I like to do, and I like to watch things.

That’s what I do when I’m onstage, I watch people, how they walk, how babies do things. Anything I see funny, at one time or another, I put it into my act.