ONE MIGHT THINK that, at eight and a half months pregnant, Jade Bills would be happiest resting up on the couch with some good TV and snackage.

But the Downtown Delilahs founder, choreographer, director, and all-around hustler isn’t one to slow down; this week, she’s finalizing every last detail, from tassels to four-counts, of her latest vision: the Sins & Secrets show. 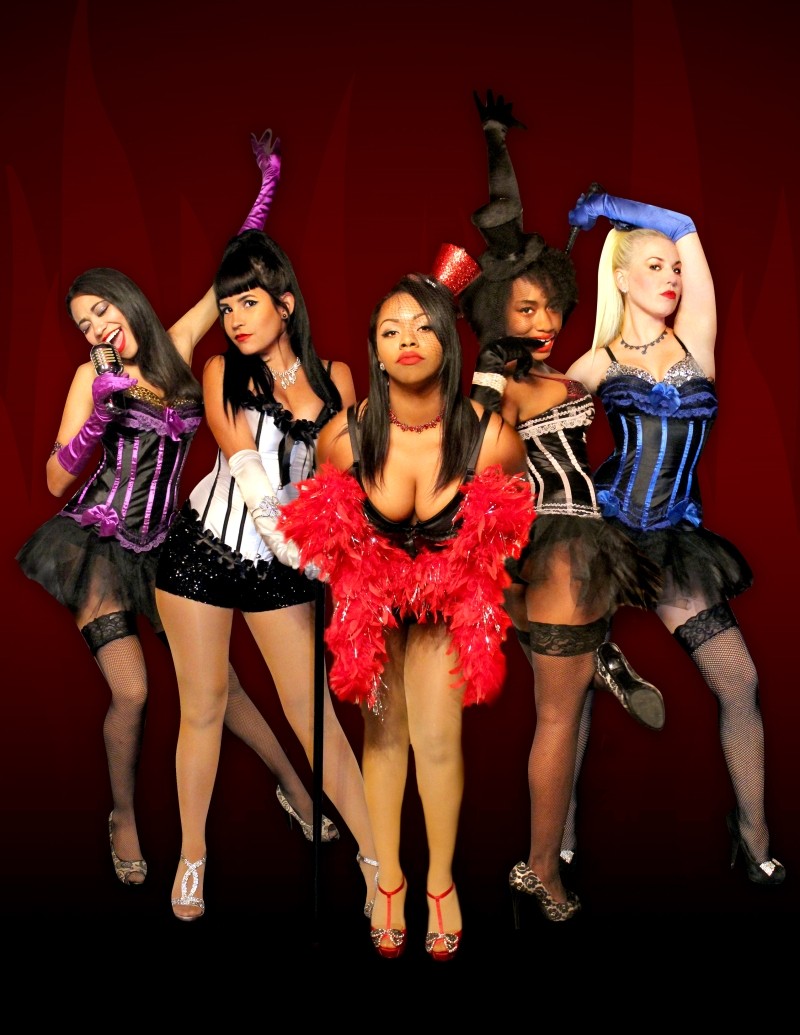 Bills’ passion for growing the troupe of burlesque-inspired dancers recently inspired her to quit her bartending gig and completely immerse herself in all things Delilah.

“Sometimes, I can’t sleep,” she says, “because I’m dancing in my head! I’m building props in my head.”

In a year, the Downtown Delilahs have grown from an idea to a nationally-recognized act. Their show and home base, The House of Mata Hari, has already been featured on Travel Channel’s Trip Flip, enchanting host Bert Kreischer and his guests.

Since the appearance, Bills has seen their audiences expand beyond family, friends, and House of Mata Hari regulars to include tourists and others who have heard the hype. Shows are held in Carnival Bar Theatre, a secret room hidden behind velvet curtains within the members-only speakeasy.

In the first months of 2015, the Delilahs will make their second national television appearance.

Bills, a self-professed 90210 super-fan (in the little time she is couching it through pregnancy, she’s watching all 10 seasons on DVD), was ecstatic when she heard the news.

“They came in, and they were so nice. We did a whole show for them,” she explains.

The exclusive performance was a success. “They loved it!” Bills grins. “And it was so crazy that something I did—[Doherty] was watching that. She was sitting there, and I’ve watched her for so many years. It was incredible.”

Themed shows are the Delilahs’ forte. From Vegas to Valentine’s Day, the songs and costumes are carefully curated to immerse the audience. Since Savannah goes completely nuts for Halloween with themed events spilling over into November, Bills decided to take a more abstract approach to a holiday show.

Don’t expect to see sexed-up witches and zombies onstage; the Delilahs will have your hair standing on end in response to the overall eerie, darkly steamy vibes.

“I tried thinking of Halloween-inspired moods,” Bills explains. “We didn’t want it to be an in-your-face, ‘happy Halloween’ show.”

In the previous shows, the Delilahs stuck with contemporary pop and classic soul cuts, but they’ll be mixing it up for Sins & Secrets.

Acts like a silhouetted three-girl striptease behind a curtain toe the line of suggestiveness and explicitness.

“This time, it’s a little bit darker, but not so dark as to make people uncomfortable,” says Bills.

“Each song is a little bit dirtier and a little more sinful than we’ve done before. It’s still sexy, but it’s different.”

This will be the second show Bills hasn’t danced in, what with that adorable baby bump, but she doesn’t feel like she’s missing out on the action at all.

The Downtown Delilah dance style is a true fusion; Bills taught herself to dance by “sitting at home like a loser and learning the choreography from Britney Spears, Beyoncé, Jennifer Lopez and Christina Aguilera videos,” and honed her skills through ballet and movement classes at SCAD.

“Now, I listen to what my body tells me to do,” she says of her growth as a dancer.

While the dance numbers are the centerpiece of Downtown Delilahs performances, Bills still refers to the evening as a “variety show,” featuring comedians, singers, and even fire eaters and magicians in the past.

For Sins & Secrets, local comedians Melanie Goldey (CeCe DeThrill) and Stacey Silverman (Petit Merlot) will entertain the audience between the song and dance. Bills is thrilled at how newcomers Goldey and Silverman have connected with the troupe—it’s the first time a show has featured women comedians, and the pair have actively attended dance rehearsals to get to know the Delilahs and understand the show from all angles.

A major perk of attending a Downtown Delilahs show is becoming a member of the speakeasy-style private House of Mata Hari for the evening, adding to the show’s intriguing and exclusive feel.

Bills loves the small-room feel of the place; as Delilah demand grows, she’d rather increase the number of performances and keep it intimate than move to a bigger room—The Carnival Bar space just feels special.

With a baby on the way, plans for the next show in the works, and plenty of excited fans, Bills is on cloud nine.

Showbiz is full of surprises—and with a due date so close to closing night, she hopes baby isn’t going to try to catch Sins & Secrets, too.

The director and future mama pats her belly. “Let’s hope nothing happens during a show in the next three weeks!” she laughs.