YOU MAY have noticed it on the way to Bluffton, there to the right before you hit up Bryan Country Store for a gasoline and potty stop.

Just over the Talmadge Bridge and only minutes from downtown Savannah, it still seems a tad isolated out there on Okatie Hwy (aka Hwy 170) and the temptation may be to pass on by, hoping for more luxurious bounty in old town Bluffton—but don’t make that mistake twice!

Tootin’ it over the big bridge early in the morning last year, taking the hubby to work in Bluffton so I could use the truck during the day, I’d seen this little hut with the cheerful pink piggies painted on the front, and it took a while to sink in that this might just be an interesting stop—they only open at 11 a.m., though, and I never seemed to catch them when time and money came together in the right way.

After a bit of research online I found that this unassuming little BBQ hut had been featured in Southern Living and South magazine, among others, and had quite the faithful following.

Some folks have remarked to me that a place that specialized in both BBQ and seafood may be stretching themselves too far—I’ll give you Papa’s BBQ & Seafood as the successful epitome of both cuisines—and now I’ll add The Pink Pig to that list as well!

Smaller, more quirky and eclectic in décor, and more hidden away, yet almost equal in age to the aforementioned predecessor, The Pink Pig holds its own in the world of Southern dining. This is not your typical rustic wood and dusky-colored BBQ shack, but an almost dainty delight of a place, with mild pink walls and wrought-iron lamps that sport pleated shades of a matching rosy hue.

Small tables on the right and the longer banquet tables to the left wear white-on-white patterned cloths, and glory be! Take a look at the ceiling! Hovering overhead, keeping celestial watch over hungry diners is a gaggle of little pink piglets with golden wings. This is the very definition of ‘whimsy’—a sort of BBQ Shangri-La, if you will!

I arrived just before Easter, and owner Rita Bryan had used a generous hand in decorating the restaurant’s faux fireplace mantel with a plethora of lilies, frothy greenery, pink tulips and fairy lights, commanded by a large cardboard Easter Bunny complete with his basket of eggs—Ok, I’ve chosen my table now! Sit me by the Big Bunny any day! 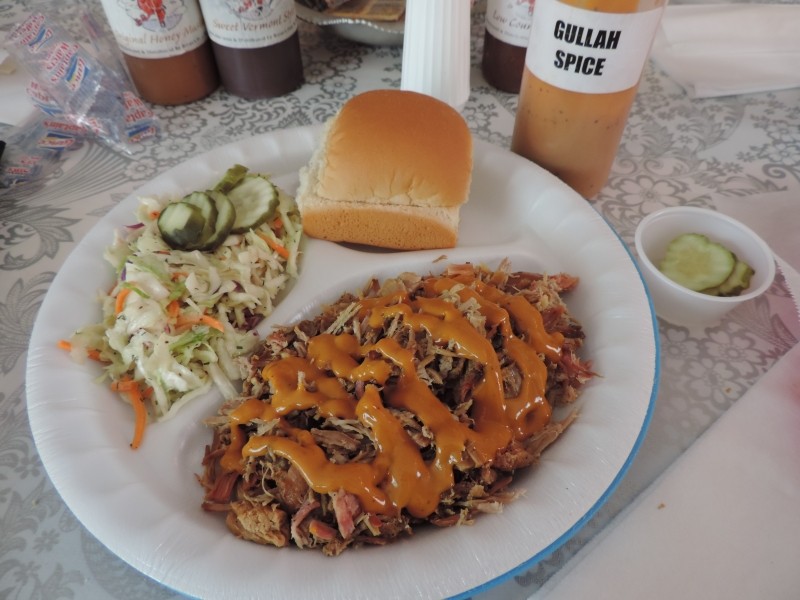 Mark Bryan and his sister Rita opened The Pink Pig on Labor Day weekend 1993, so it’s been around longer than you may expect. They were inspired by their daddy’s home-smoked BBQ and Mark created the original sauces. My favorites slide between the Gullah Spice—just enough bite to make it interesting and plenty of pungent flavor—and the Original Honey Mustard—I don’t cotton to sweet BBQ sauces generally but this one also has a good amount of spiciness without being overwhelming.

Rita’s mom, the “Grande Dame,” Wilma Fender Bryan, and her sons Bryan and Leonard, keep the place hoppin’ with musical selections that seem right in tune with the whimsical atmosphere—Sam Cooke, Rick James, and a selection of reggae that soothes the soul while you lunch on the divinely moist and tender chopped pork.

My personal, not-so-secret delight, though, is the fried shrimp: this is the one dish I simply cannot stop myself from consuming down to the last bite. It’s a healthy habit of food writers to nibble a little of this and a pinch of that from several dishes, just to get the taste of an eatery’s fare...but those shrimp...the word that comes to mind is ‘WOW!’

Delicately crispy and perfectly seasoned chicken is also a local craving that gets satisfied right here at The Pink Pig, so order yourself up some of those scrumptious wings as an appetizer. It is a measure of a truly good restaurant that they do not stint on the side dishes. Too often a good BBQ will be accompanied by canned, lackluster beans or slaw that’s none-too-fresh and floating in mayonnaise—you will not find that here!

I’m particular about side dishes and all of the ones I’ve had here passed the test with flying colors. The coleslaw is exquisitely crunchy and fresh, with only the mildest and faintest dressing of mayo, and the baked beans are richly flavored, with a light touch of cinnamon. The Brunswick Stew has plenty of meat and a sprinkling of corn and onions—ask for crispy dill pickles on the side—and comes with locally loved Lance Cap’n Wafers. Rolls are big, soft and fresh, making them perfect to pile up with pulled pork and loaded with Leonard’s Sweet Vermont Style sauce.

You may think this pretty pink palace-in-miniature to be anathema to the menfolk, but each time I go there are plenty of hubby-wife combos and groups of gentlemen enjoying a copious lunch (and, one would suppose, studiously ignoring the florid pinkness surrounding them). Who cares about the pinky tones when there’s scrumptious BBQ and divinely inspired seafood to be had? No cards accepted here, but bring your cash in hand, or they will also take a local check.