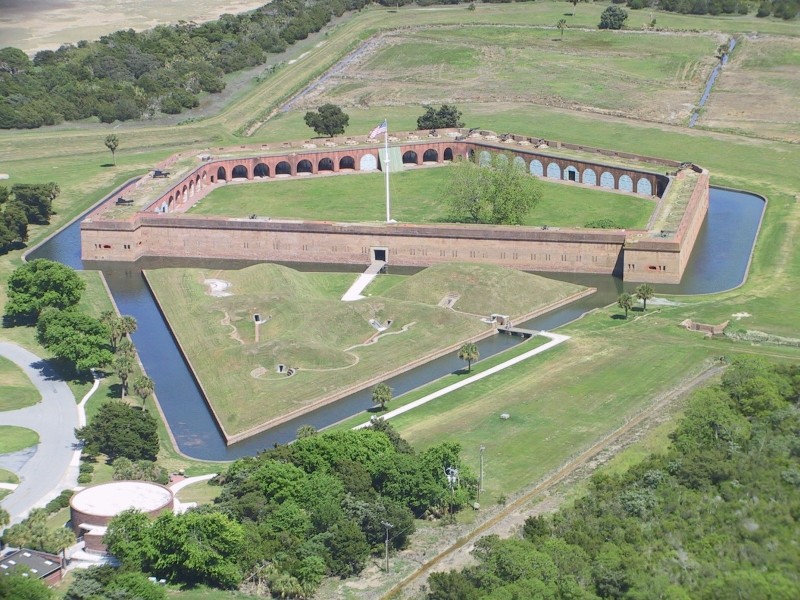 Fort Pulaski is still where it always was, if you get the drift of the story

I'VE BEEN A licensed tour guide for over 14 years now, and for the most part I run a haunted pub crawl.

That’s probably how most of you recognize me: dressed in Confederate wool.

Sometimes it even shocks people to see me out of uniform, such as the pub owner who recently saw me exiting a meeting downtown. I was wearing a polo shirt, and he pointed at me and laughed, “Ha ha, you’re wearing people clothes!”

As a guide, I’ve been asked a lot of questions over the years by tourists. Most of the time, the questions I get on the haunted pub tour involve either the paranormal (“Is that story really true?”) or the mundane (“Where’s the bathroom?”).

But occasionally I get a question that is just so bizarre it sticks with me. I recall one such incident a little over eight years ago: it is the current title holder for Strangest Tour Question Ever.

A woman in the tour group seemed to be very interested in all aspects of Savannah’s history, and peppered me with queries. I could tell she actually annoyed some of the other tourists in the group, since her wonderings were pretty far off-topic (they dealt with neither ghosts nor pubs, and she often interrupted my narrative to ask), but to tell you the truth I didn’t mind a few questions from the proverbial left field.

It was a welcome break from my usual routine. My theory was that she had paid her money for two hours with a licensed tour guide, so as long as she didn’t ask for my Social Security number, I was going to answer whatever she wanted.

She had an eighth grade grasp of American history, but she had apparently paid attention on her trolley tour, and had some unresolved stories she wanted to have elaborated. I took it as a challenge. Besides, how often does a tour guide get to talk about Eli Whitney on a ghost-themed pub crawl?

“I wanna know about Fort Pulaski,” she said. “Can you tell me about it?”

We were almost at the end of the tour, so I faithfully related the story of our masonry fortress, located on Cockspur Island at the mouth of the Savannah River, its connection to Robert E. Lee, and the difficulty of the construction.

I told her how it was seized by the Confederacy without struggle in 1861, and how the Union forces hatched a grand plan in 1862 on adjacent Tybee Island to retake the supposedly impregnable fortress using cutting edge technology (rifled bore cannon, with much improved accuracy).

“If the Union controlled the fort, they could effectively close Savannah’s seaport for the duration of the war,” I told my crowd.

While I was no park ranger, I think I did a credible job describing the confidence of the Confederacy and the nagging doubts of the Union gunners. The Union’s artillery batteries, the closest of which was 1700 yards away on Tybee, were more than three times the recommended effective firing distance of 500 yards.

Their bombardment’s success depended entirely on those new cannons, guns which were untested under combat conditions. Once the battle began, one overconfident Confederate observer even offered that the Rebel gunners were only wasting shot and powder by replying to the Union guns.

The crowd fell silent as I described the one-sided battle: how the devastating new Union guns mortally wounded the supposedly invincible masonry fortress. In a little over a day of shelling, brick fortifications were proved to be obsolete forever, and Confederate Colonel Charles Olmstead chose the only honorable option left: surrender.

As I wound down the narrative, I was internally quite pleased with myself. That is, until I saw the woman’s furrowed brow.

Had I left something out? Did my story not answer her question?

She asked, “How far apart were the Union guns and Fort Pulaski?”

I had already told her this during the narration, but I repeated the information: “About 1700 yards, Ma’am.”

“Yes,” she said. “But how far apart were they back then?” I blinked, trying to grasp what she was asking.

She spread her hands slowly apart, pantomiming some unclear action. Did she want me to convert it to metrics for her? Was she imagining some sort of coastal erosion?

Slowly, the focus of her question dawned on me, and I asked her: “Ma’am, are you asking about Continental Drift?”

Indeed, she was. A few in my tour group smiled and looked away to stifle their laughter. Mustering all of the politeness I could manage, I repeated, “Um, about 1700 yards.”

During my first few years as a tour guide, I used to invite tour-goers to ask whatever they wanted by saying, “Remember, there are NO stupid questions.”

Needless to say, after the Continental Drift Debacle of 2006, I have learned the hard way not to say that particular line any more.