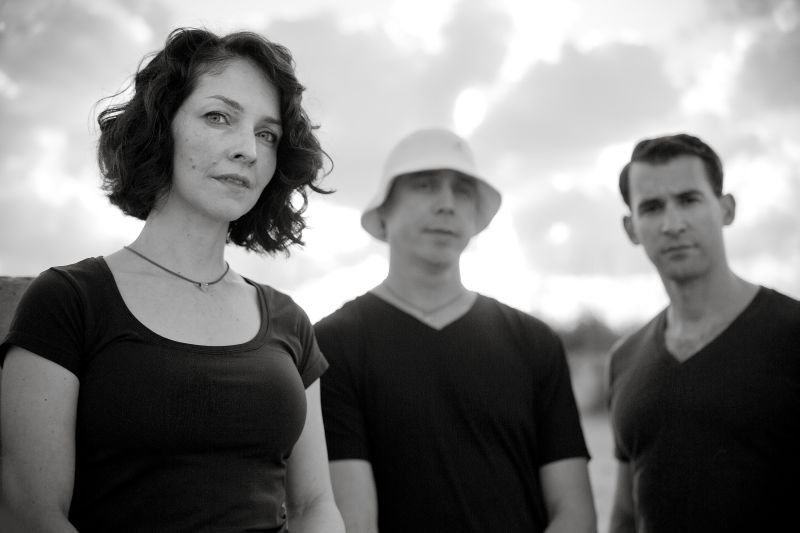 SO, a bossa nova-loving competitive opera singer, a freestyle rapper, and a sharp-minded guitarist walk into a bar...

The members of Savannah’s My Maiden Name hail from truly eclectic musical backgrounds, but when they come together, their new wave, Brazilian pop. ‘90s alternative, and hip-hop influences meld into a contagious, summery sound.

Led by Anne dos Santos’ trained and beautifully unusual, bilingual vocals, there are shades of The Cranberries, Better Than Ezra, and the like stirred in with danceable beats and infectious melodies from guitarist Jason Beck, bassist Dennis Barber, and drummer Rhett Coleman.

We chatted with dos Santos, Beck, and Barber about the band’s origins and the release of their first EP, My Thoughts, The Same.

Let’s hear about the EP! You recorded with Kellan Powers and Craig Tanner, is that right?

Jason Beck: There's five songs. The first four arestudio recordings; we did those with Kellen. It was a great experience, he's an easy guy to work with, very talented sound engineer. We're very happy with what he did for those songs. The fifth one is a live recording that Craig recorded for us, and that came out pretty good, as well; it was from a spotlight set we did at [Molly MacPherson's] open mic.

Since it's your first recording, this is an introduction to the band for a lot of people. How do you feel it encompasses your sound?

Dennis Barber: I think we all have a different view of it. For me, it shows a wide variety of songs from scratchy, driving songs to very melodic, and then "No Encanto" shows that we have some Brazilian and Portuguese influences—sweeter songs.

JB: At first, we started recording songs for the novelty of it. When we started this project, we wanted to have something tangible. For our very first little EP, it shows a nice range. I think they fit together nicely.

Anne dos Santos: These were some of our earlier songs; they are songs that have had a chance to grow.

JB: I like the way our songs develop. The mainstay process is I come up with some musical ideas—I'll have the idea for the verse, guitar chords, and maybe what the melody will be with the verse, same with the chorus—I'll bring two or four song ideas to these guys, and hopefully, out of four, there's one we all like! And these guys are much better at writing lyrics than I am.

DB: I think Anne’s really good at developing melodies, especially some of the slower, softer songs that are very melodic. My major contribution is in lyrics. Jason likes to use the analogy of raising a kid.

JB: I conceive the kid and give birth to it, but it’s completely unruly, and I nurture it for a little bit, then it gets to the point where it starts asking questions I can’t answer, so I give it to these guys and they kind of raise it a little bit, and once it’s been civilized, it comes to me for further refinement.

Lyrically, what are you trying to impart on this EP?

JB: We all have a hand in writing and taking the lead on lyrics. Each of us have very different styles, which I kind of like.

DB: We all have different approaches, tendencies, themes we gravitate toward. The stories [Jason] tells are different from what I tell.

JB: Mine are more about internal struggles. These guys are more about existential things, external influences. I think that comes together in a neat way.

ADS: I do write about internal battles, but it’s mainly under the theme of love.

JB: And my songs are never about love!

JB: I’m the dark, twisted one.

How did the band come together initially?

JB: Dennis came to where I work about two years ago, and after a few months, I was like, 'Okay, I'll see what this new guy is all about!'

I asked what he did for fun; he said, ‘I play bass guitar and my wife sings.’

I said, ‘Oh, really? I like to play guitar, maybe we should get together and try to do something.’

We got together that weekend.

Next Monday, Dennis came in with whole sheet of lyrics. I thought, ‘That was a fun experiment. We’ll play it at an open mic, or bust it out in a year when we’re drunk.’ ...and that was about 25 songs ago!

Do you feel like y’all had similar taste in music when you met?

DB: There's a crossover, a Venn diagram where there's some '90s alternative and '80s new wave that we all dig. Our influences are very different. My father and grandfather were bluegrass musicians, and in undergrad, I got into hip-hop. I did freestyle and rap battles for like, seven years.

JB: Anne has a lot of background in opera.

ADS: That’s where I started singing. It feels like another lifetime! But I always loved singing, so when I had opportunity and Dennis had some songs I said, ‘Oh yeah. Let’s do this.’

Since I’m half-Brazilian, I have a lot of influences within popular music, bossa nova. Anything ‘80s.

What was it like singing pop music with an opera background?

For me, it’s fun, because I always thought of the voice as an instrument. What can you do with it, how can I play with it?

Grab a copy of My Maiden Name’s first EP, My Thoughts, The Same, at their release party on Friday. They’ll perform with open mic buds Nico Dylan and Mitchell Miller and fraggle-punks The Gumps. Savannah artist Lauren Schwind will be live painting throughout the show.