FOR ONE WEEK this summer, a group of Savannah health advocates traded oak trees for cacti, humidity for aridity, and the daily grind for the long view.

Forsyth Farmers Market co-founder Teri Schell, Blessings in a Bookbag founder Mahogany Bowers, C.O.P.E. for Change founding director Sandy Baker and Chef Wendy Armstrong of Thrive Catering traveled to Canyon Ranch Institute at Canyon Ranch Resort in Tucson, Ariz., at the end of July to brainstorm on how to improve the health and well-being of Savannah’s youth through food. 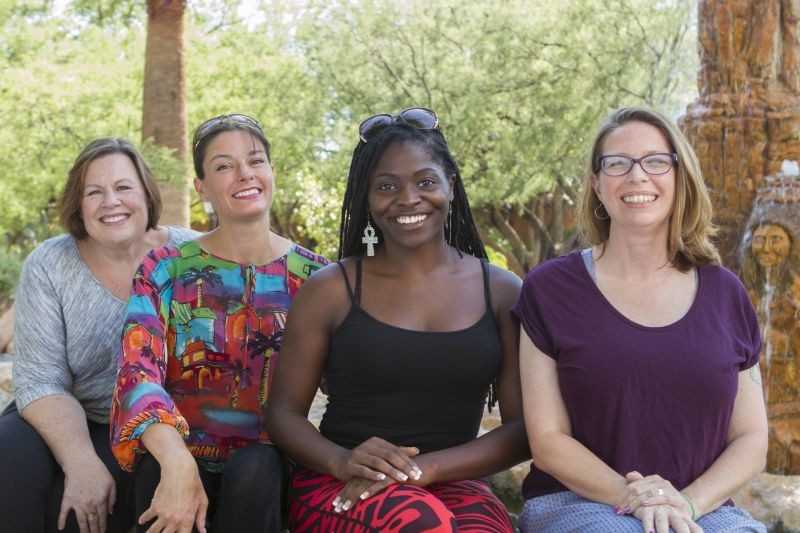 While the topic was familiar, the terrain and weather were another matter. Mountain hikes were often interrupted by afternoon monsoons, and temperatures soared near 100 degrees.

“Everyone kept saying, ‘it’s a dry heat,’” says Bowers with a laugh. “But it was still hot hot hot!”

“I’d never seen anything like the saguaros,” marvels Baker of the tall cactus that grows one arm every 70 years.

Each of these women has worked for years to address nutritional education and access in different ways, yet this is their first formal collaboration. Joining forces as C-Port Youth Empowered Savannah, the team was one of four awarded a scholarship to attend workshops and strategizing sessions—and enjoy a spa service or two—at CRI’s coveted Healthy World program. At the urging of local foodie and facilitator Lisa Goodman, the four health proponents met and conceived of a joint project that employs their collective skills.

“I was particularly excited that this team was selected because their work is a natural complement to the ongoing Canyon Ranch Institute Savannah Partnership (CRISP) with visionary leaders Charles H. and Rosalie Morris.”

Morris, president of Morris Multimedia and publisher of Connect Savannah, and his wife, Rosalie, have helped sponsor the local preventative health care program that grows organic veggies at the Morris Center’s Trustees Garden and offers free cooking classes and health services at the nearby Curtis V. Cooper Center. The partnership has expanded awareness about healthy eating in Savannah, which has some of the highest rates of childhood obesity and child hunger in the country.

But the C-Port Youth team knows there’s much more work to be done.

“The unfortunate reality that we face is that it is more expensive to eat the way you’re supposed to,” explains Bowers, whose Blessings in a Bookbag delivers nutritious snacks to 70 families every Friday.

“When you have a family that has ten dollars and a mom that has two jobs, it’s easier and cheaper to feed everyone from McDonalds. Getting fresh fruits and veggies is hard, especially if you don’t have transportation.”

Armstrong, who offers healthy, handmade school lunches as part of Thrive Catering, agrees that economics is large part of the challenge.

“How can lower-income families address a balanced diet when they’re just struggling to feed their kids? We have to make it easier to access better nutrition.”

At their desert retreat, the group pooled their resources to begin developing a youth-centered nutrition curriculum. A big piece of the puzzle will be the Forsyth Farmers Market’s new Farm Truck 912, which already makes six stops a week and has a new app with vendor list (push notifications coming soon.) The mobile market accepts SNAP benefits and EBT cards and is building a following in low-income neighborhoods and food deserts where fresh fruits and vegetables aren’t available.

But getting people who don’t usually cook to buy raw ingredients is more complicated than simply pulling up to the curb and waiting for people to show up.

After its initial launch, the Farm Truck restructured its prices and offered more recognizable inventory to accommodate feedback received from its targeted clients.

(For more on Farm Truck 912, see Jared A. Jackson’s food piece this issue.)

Photo Courtesy of Mahogany Bowers
Bowers and Schell took time out for a desert hike, taking care to avoid prickly pear cactus along the trail.

One of the workshops at CRI focused on this kind of “equitable communication” when it comes to providing effective service.

“We talked a lot about not just the people you wish to serve, but also the organizations and agencies that you work with and making sure everyone is at the table and feels like they have an equitable stake,” says Schell.

“I found that really interesting, because sometimes we tend to do things and make decisions that affect people or leave them out. That hit home for me.”

Though the other teams comprised physicians from Johns Hopkins University and executive directors of large non-profits, the Savannah group found it heartening that all had experienced similar issues of under use, even after making big pushes in their communities.

“I felt very honored to be in the same setting with people with more formal educations, but we were all on an equal level while we were there. We all work with people who need what we have, but we have to be patient and caring and innovative to get it to them,” says Baker of COPE, which stands for Childhood Obesity Prevention Education and hosts 12-week afterschool fitness and nutrition programs around the city.

“We all had the same challenges: How do you get people to stay and use what you’re offering? It was encouraging to know that they are dealing with the same thing. It felt like we are on the right path.”

Adds Schell, “I think we all have vibrant projects already, and I just can’t help but think that they will be made better by each other’s experience and working together.”

Still, the team recognizes that there are cultural and economic barriers that keep people from coming to and implementing healthier food choices.

“The answer isn’t some unicorn running through the city that we just need to catch,” says Bowers. “We have to come in with the education. Some people who receive SNAP benefits don’t know what to do with a zucchini or an eggplant. Others just do not have the money. We have to figure out what works.”

While they worked out the basic framework of the C-Port Youth Empowered project, the Savannah scholars had the chance to spend time with CRI president Dr. Richard Carmona, who served as Surgeon General under President George W. Bush and is a vocal champion of public health. They also got to explore Canyon Ranch’s luxury facilities, taking in massages, soaking in rejuvenating pools, hiking picturesque Sabino Canyon and eating the way they hope to help Savannah eat.

“Even though it’s a spa for millionaires, it wasn’t over the top in the display,” describes Chef Armstrong of the menus. “It was simple, small portions and fresh, good quality.”

The resort-wide policies of no soda, no sugar, no salt and no smoking weren’t difficult to adapt to for these four hard-working, health-conscious women. But putting down their cell phones and enjoying the free moments between sessions proved much harder than making it through a hot yoga class.

“I felt like I didn’t even relax until the last day,” says Bowers. “I was so humbled and grateful to have this opportunity. At the same time, it was a lot of pressure, because I felt like I needed to get everything I could out of the experience so I could bring information and tools home to my community. I just wished I could share this with other moms, who deserve it too.”

Baker confesses it also took a couple of days for her to unwind. For the behavioral health promoter, the week in the desert was a gentle reminder of the importance of self-care, a component that she advocates for through COPE and hopes to include in the collective project.

“If you already feel like you don’t have time for it, it’s really hard to get into that mode. But if we want to be able to give back, we have to feel worthy, to have that full well within,” she says.

“Like on the airplane, putting the oxygen mask on yourself first—that’s a new concept to some people.”

Now that they’re home from the desert and back to work, the four members of C-Port Youth Empowered Savannah are refreshed and ready for action.

“Our next step is to reach out for more partners and resources for our project,” says Armstrong.

“In my little section, that means finding chefs who might be interested in doing demos and education and other people who find this interesting and want to lend a helping hand.”

As they combine their skills and tools, the team believes there are others who will want to feed a shared long term vision that’s greater than the sum of its parts.

“There are many more entities that all want better for Savannah,” assures Schell.

“We all want people to eat better and to not be hungry.”