What’s the deal with the new crop of bathroom odor-reducing sprays that have come out over the past ten years or so? How do they neutralize the nastiest bathroom stench and replace it with a delightful scent almost immediately? —Karl Schoettler 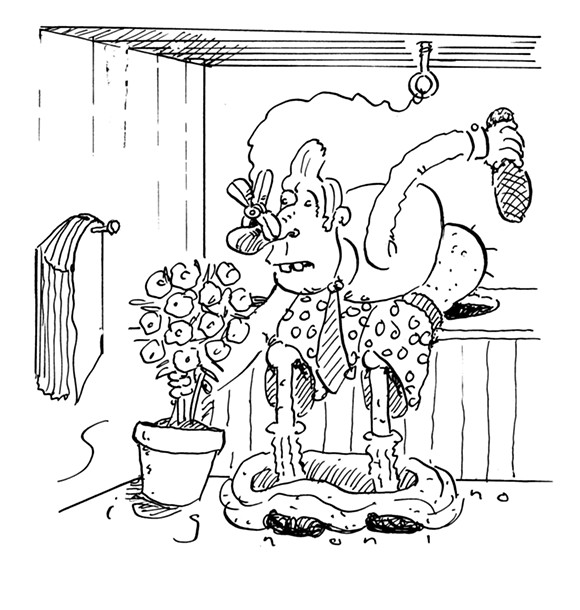 FORGET a better mousetrap. You really want the world to beat a path to your door? Find a way to make farts smell like lilacs and strawberries.

The air-freshener people have been doing their best for decades now, of course: teaching us to feel shame about smells intrinsic to ordinary human existence and peddling a succession of new and improved products designed to obscure them. And the products often are new; we can agree on that. But—your own experience notwithstanding, Karl—it’s a lot trickier to demonstrate that they’re improved.

For some background, let’s recall the words of an internationally recognized expert: “There are three basic ways of getting rid of undesirable odors: masking them with stronger scents, such as the ubiquitous lemon and pine fragrances; chemically dissolving or absorbing them, as with activated charcoal or silica gel; and numbing out your nose, so you can’t smell a damn thing.” This expert, of course, was me, speaking deep from within the last century—in 1980, to be exact, not long after air fresheners had moved on from using formaldehyde as a nasal anesthetic.

Needless to say, manufacturers have rolled out countless new smell-fighting products since then. Some of the most successful (and perhaps the ones you’re thinking of) have been marketed as “odor eliminators”—notably Procter & Gamble’s Febreze line, which reached $1 billion in sales in 2011. Here the active ingredient is a chemical of a type called cyclodextrins; their molecules are roughly funnel-shaped, and have a particular ability to bind with what are known as hydrophobic molecules, which resist contact with water. The more problematic odor molecules, tending to be hydrophobic, get trapped inside the funnels and are thus rendered unsmellable. Meanwhile, the spray’s own scent fills the air.

Or that’s the idea. In one Febreze Air Effects ad, blindfolded volunteers were unknowingly placed in close quarters with barnyard animals and raw fish but professed to smell only a pleasant floral aroma; when <ital>Consumer Reports<> tried to replicate this, though, their subjects had no problem picking out the fouler odors, and remarked on the chemical smell of the spray as well.

Many air fresheners, including the all-business Ozium (beloved of surreptitious stoners) as well as friendlier supermarket brands, bill themselves as antibacterial or antimicrobial. Effectiveness aside, this premise makes some sense on paper: the dreaded fecal smell, for instance, is bacterial in origin, a molecular stew of things like methyl mercaptan, hydrogen sulfide, and dimethyl sulfide, collectively known as volatile sulfur compounds.

(These same VSCs, curiously and grossly enough, also cause halitosis.)

When we last discussed this topic, environmental concerns had just put the kibosh on the ozone-puncturing CFC-powered aerosols the industry long favored. Reformulated sprays are still going strong, but alternate delivery systems have proliferated wildly. The best-known may be the plug-in, which dissolves a fragrant goo via electrical heat and disperses the vapor. Of course, this is just a fancied-up take on the old-fashioned diffuser, where a candle heats a basin full of scented wax or oil.

Then there’s some stuff called (welcome to the brave new world of product branding) Poo Pourri, which you’re supposed to spray into the toilet bowl before getting down to business—it supposedly forms a protective film of oil on the water’s surface, trapping nasty smells below.

I can’t speak to how well this works, but the fact that the oil is strongly scented suggests the film may not be as protective as users might hope.

As you wage total war on bathroom odors, though, be aware that some air-freshener contents aren’t things you want in the house. After a 2007 report by the Natural Resources Defense Council revealed that a variety of air fresheners contained chemicals called phthalates, which may interfere with the body’s hormone production, some manufacturers changed their formulas. It’s hard to know what else may be in there, though; federal regulations don’t require labels to list fragrance ingredients by name, but testing in 2012 found that air-freshener fragrances included compounds that may contribute to asthma or other health problems. Literature from the U.S. Consumer Product Safety Commission baldly states that air fresheners “release pollutants more or less continually.”

Of course there are cases where concealing odor is just a bad idea. The smell of mold doesn’t mean you need better air freshener—you need better ventilation, and possibly a cleanup crew.

But if your nose is so dainty it simply must not smell a fart, consider a time-honored home remedy: lighting a match.

This actually works—though not, as many believe, because the flame initiates a chemical reaction that neutralizes the smell. (Without delving too deeply into the dubious pleasures of pyroflatulence, I’ll point out here that fart-lighters are not typically combusting methane, a minor component in most people’s gas, but rather odorless hydrogen.)

Instead, sulfur in the match head becomes sulfur dioxide, the piercing smell of which leaves your olfactory receptors too confused to register the stench of methyl mercaptan.