How to speak dinosaur 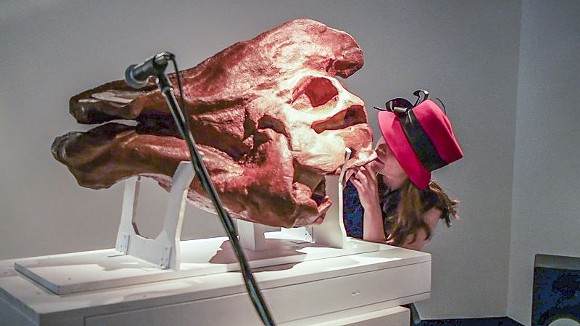 DINOSAURS have always sparked interest for how unusual they seem to us. We only know about them through extensive research, so every opportunity to learn more about them feels like a secret being uncovered.

Sound artist Courtney Brown wasn’t always into dinosaurs, but a stop at a dinosaur museum in New Mexico piqued her interest.

“We went in there and the thing that intrigued me the most was this Parasaurolophus, also known as a hadrosaur. You would press a button and hear the simulated call,” remembers Brown.

“This call came from the early ‘90s and they were able to recreate this call virtually. So when I pressed the button and heard the call, I create new musical interface, so I was like, ‘This is not how you would interact musically! It’s just pressing a button!’”

Hadrosaurs are known for their large hollow crests, which have had scientists puzzled for years. They first thought the crests were for storing air, since hadrosaurs lived partially underwater, but as it turns out, that’s not the case.

“The prevailing theory is that these crests are for sound resonation,” Brown explains. “They were social creatures, they lived in herds — they were talking to each other.”

Brown felt disconnected from the hadrosaur by pushing a button to hear its call, which, for such a social species, didn’t seem right. She and collaborator Sharif Razzaque joined up to create “Rawr! A Study in Sonic Skulls” to bridge the gap between humans and dinosaurs.

The exhibit is part of this year’s PULSE Art + Technology Festival, put on by the Telfair Museums and held at the Telfair’s Jepson Center. 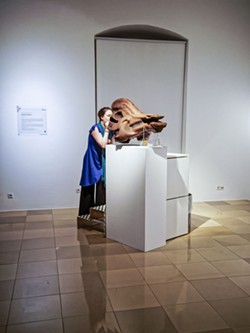 The skull that Brown and Razzaque use is a 3D model, created from scans of a Corythosaurus skull and hollowed to represent the crest and nasal cavities. Users blow into a mouthpiece and make the sound of a hadrosaur’s call, resonating through the skull.

By using one’s own breath to replicate the call, the connection between the user and the dinosaur becomes more intimate and gives the user a glimpse into the life of a hadrosaur, an uncommon privilege.

“The skull requires effort to roar. It is not easy,” Brown writes on her website. “Through this effort, we can feel the enormity. We no longer need to see it to understand it. We know it in our gasping for breath.”

By turning the skull into, essentially, a large dinosaur tuba, blowing into it is a musical performance. 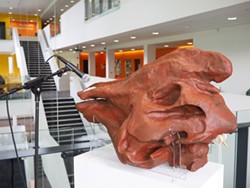 Brown’s performance and talk on January 12 will demonstrate how to use the skull as an instrument.

“Part of my research is about kind of living with it as a musical instrument,” she explains. “I’ve come up with different ways of playing it and hearing the music, and you’ll hear what I hear.”

The skull will remain up at the Jepson through April, where museum guests can experiment with it as much as they’d like.