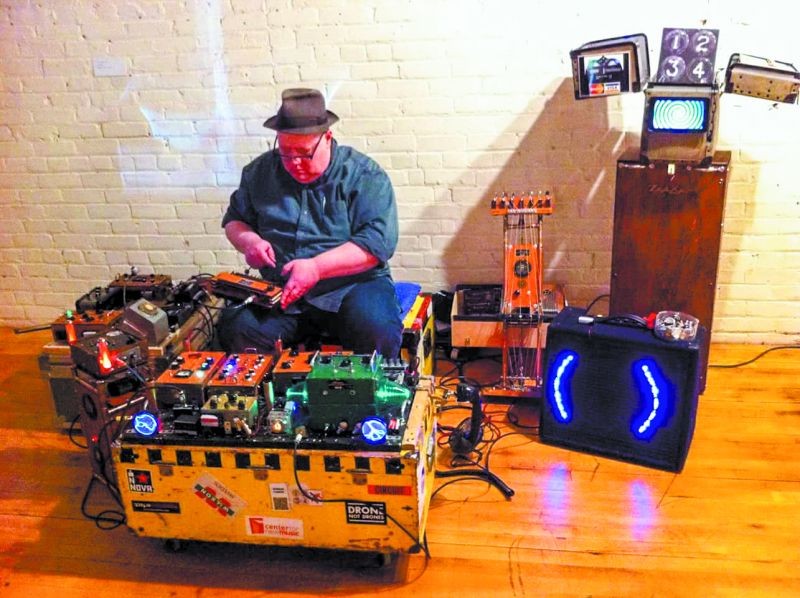 Tim Kaiser’s live setup features many of his handmade creations.

SOME CALL them "experiments in adventurous art." Others say they’re works of "eclectic genius." In the creator’s words, they’re "gonkulations" and "acousto-electic contraptions." However you define electronics wiz and experimental musician Tim Kaiser’s handmade music gear, there’s no denying that there’s a fascinating creative energy poured into each unique instrument.

Kaiser guts baby rattles and vintage radios and digs in hardware store bins and Salvation Army shelves to score parts and wire together a labyrinth of atmospheric sounds. His music and creations—of which he’s built over 150—have been heralded by Make Magazine, Wired, the New Art Examiner, and the Associated Press. Savannahians can see his myriad of devices firsthand in action at Sulfur Studios this weekend.

We chatted with Kaiser about his musical roots, building instruments and soundscapes, and how curious creators can start making contraptions of their very own.

I understand you started out playing guitar. What made you transition to making your own instruments?

The biggest thing is my little brother is also a guitarist, and he’s really, really good. We used to do Django Reinhardt swing jazz and do the coffee house circuit in college in the late ‘70s and ‘80s. That was a lot of fun, but he was so good, it kind of dawned on me that I would have to give up everything else in my life to ever get that good. And so I kind of had said everything I needed to say with guitar. I’ve always been interested in experimental music and drifted that direction.

Did you have a knowledge of electronics?

I was in a punk band when I was a kid, and the thing about being in a punk band is you have no money, and your equipment always sucks. You’re always having to fix stuff. I took basic electronics classes in high school and whatnot. Fixing things evolved into building things. I would want to make a thing that does such-and-such, and I couldn’t afford to go buy it, I’d build it.

What was the first thing you built?

How’d it turn out?

I sold it like a week after I built it. I brought it into a guitar store to try it out on a really big amp, and the guy who ran the store asked, ‘How much do you want for it?’

When did you start bringing in nontraditional elements and thrifting parts?

I’ve always kind of done that—I’m a scavenger, and there’s a certain design aesthetic I like. Post deco. And in the electronics world back in the ‘40s and ‘50s, most people would only think about the radio or TV, where I was interested in the test equipment from that era. I really like the look of it, and I like knobs and gauges.

Is there one musical experiment that really surprised you?

There’s one I built 20 years ago, the green beehive lightbulb. It’s a green metal box that has green beehive lenses on ths side, and it’s a delay, and it was the first kind of delay project I had done where I used somebody else’s circuit. I modified an old guitar pedal to make it do a little more than it was designed to do. I liked the look of it and it’s one of my favorite pieces and it’s in my touring rig all the time.

What else is in your touring rig right now?

One, two, three, four, five...six delay units, an envelope filter, a telephone dial that plugs the signal through and the turn dial chops the signal up. That’s the main board. Then I have all my instruments that I plug into that.

Are you layering a lot in your live show? Do you consider it process-based?

I think in terms of atmospheric. I’m creating loops, altering the pitch, and stacking them on top of each other, so it’s very textural.

You play a variety of venues. Do you find that people receive your music differently in arts venues as opposed to music venues?

What advice would you give to someone who wants to build their own gear?

Learn how to solder. Get good at soldering—that’s the biggest. Then the second thing would be to learn how to build a piezo pickup—you’ll use it for everything.

Your infrared Theremin is fascinating; what was the process behind that one?

I discovered the interface for the infrared part—they’re commercially available, they don’t make it anymore—but the interface really intrigued me. It uses four infrared transmitters like a TV remote has, and two are sending pitch data and two are sending volume data and they bounce off your hand, back to a receiver, so the angle of the deflection and how long it took to get back is measured by a little tiny processor inside to change the dynamic of the sound for whatever you’re doing with your hand. When I first saw it, I was infatuated with it.

Are you working on anything exciting right now?

It’s all exciting! I’ve been working more with stringed devices...I’m using a bow a lot, a cello bow I like. A lot of things will vibrate with a bow—not just strings—so I’ve been experimenting and I’m going to crank out different devices that I’ll play with a bow.

The experimental scene is pretty close-knit—you make a lot of custom pieces.

Yeah, that’s kind of my day job. Usually, I’ll get an email from someone—‘Hey, can you do such-and-such,’ we’ll go back and forth and come to terms on budget, with what it’s going to sound like, when they’re happy, I build. I’ve got a one-year waiting list.

There’s such a specific language for describing sounds in the experimental and noise community. Is it difficult for people to explain what they want out of an instrument to you?

I usually have two kinds of clients—those who know exactly what they’re looking for sound-wise, they’ll describe to me what sort of sound they are trying to achieve and I figure out a viable way to do it. Then there’s the kind of client, and I don’t get very many, who says, “Here’s the money, build me something.’ The freedom to just experiment like that using somebody else’s budget so you don’t have to worry is awesome.

It’s going to be a sonic mirage, a little different than what you normally expect. One of the best shows I ever had at the Cincinnati Museum of Art, halfway though I looked up and everyone was laying on the floor, totally into it. I really liked that. Bring your earholes!