AH, Tybee Island. Miley Cyrus shared a passionate kiss on your pier for The Last Song. Dwayne "The Rock" Johnson and Zac Efron kicked up sand upon your shores as they rushed to the rescue in Baywatch.

And in 1982, a woman was gored with a pitchfork in one of your historic beach houses.

Horror fans have spent decades waiting for a DVD release of The Slayer, a cult classic filmed on Tybee in the heyday of slasher flicks.

For years, bootlegs circled and fans downloaded The Slayer via YouTube. Now, Arrow Video is setting the film out into the wild on Blu-Ray in August, and Slayer’s filmmakers are heading back to Tybee for a live Q&A and screening. 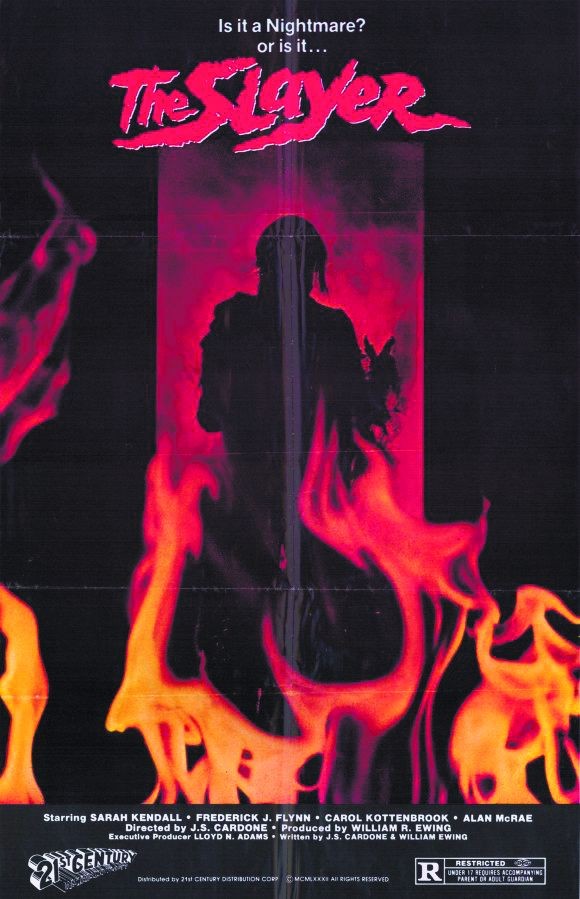 J.S. Cardone is a familiar name in the world of mystery thrillers and horror—he wrote and produced Prom Night, The Covenant, The Stepfather, and more—but The Slayer was his very first cinematic endeavor.

“To be perfectly honest, I hadn’t looked at the film in over 30 years,” the filmmaker shares.

“Just recently I watched it to be able to talk about it in interviews. It’s very simple in its execution, and today, I’d probably do things a million different ways. But the suspense elements that I set out to accomplish are still there and still deliver.”

The Slayer follows Kay, a surrealist artist, her boyfriend David, brother Eric, and Eric’s gal Brooke as they holiday on a remote island.

The restful vacation they had in mind is rudely interrupted by a wicked storm.

As the rains pummel their beach house, Kay begins having nightmares of a vicious killer, sensing an evil in the couples’ midst.

It all seems like a dream, until David is found dead.

“Obviously the time was ripe for horror films after the success of Halloween,” Cardone says.

“I had been interested in doing something along the lines of the great Val Lewton films from the ‘40s like Cat People, Body Snatcher, and I Walked with a Zombie. They were very atmospheric and relied on slow-burning suspense rather than just shock.”

Indeed, The Slayer is a gore fest (though quite tame by today’s standards), but Kay’s dreams add a surrealist quality that allowed Cardone and his team to get experimental and innovative.

“Film technology had advanced lightyears since 1980, so there are obviously limits in the execution of effects and filming techniques,” he says.

“It was a low-budget film with all the constraints that come with lack of money. But, having said that, those restrictions can cause filmmakers to get a little more creative. I look at some of the things I did later in films like The Foresaken and Prom Night that money allowed but may not be as inventive as what we were forced to create in Slayer.”

Slayer superfans have theorized that the film, which preceded A Nightmare on Elm Street by two years, inspired Wes Craven with its dream sequences. Cardone finds the suggestion “a bit laughable.”

“All storytellers are influenced by a myriad of past themes,” he explains. “H.P. Lovecraft and Poe, among many others have all touched on the ‘dream’ factor.

“The difficulty in fashioning the narrative for Slayer was in how creative we could be with the back story colliding with the present and future, and maintaining the level of suspense while keeping the audience on the outer edge of Kay’s nightmare world.”

Savannahians will spot many familiar locales in the film, but one venue in particular is the true star of the show.

The Tybee Post Theater itself, in its worst state of ruin pre-restoration, provided a terrifically terrifying backdrop.

“The script called for a very remote location to make the suspense aspect of the narrative work,” says Cardone.

“The first moment I saw Tybee, I knew it was perfect for what I had in mind. At the time it wasn’t as developed as I imagine it is today, and during the fall of the year, the island was pretty much deserted. I think what really sealed the deal was the old ruins of the theater. It looked exactly like the one I had written in the script.”

As to the enduring appeal—well, there’s nothing as appealing as the forbidden. When the film was banned in the U.K. due to its violence, demand increased.

For horror fans like Ryan Graveface of Graveface Records and Terror Vision, which releases horror movie soundtracks, Slayer is canon. Graveface will co-host the screening this weekend.

“Slayer is a flick that I recall first seeing on a local late night TV program in Toledo when I was a kid,” he recalls.

“It oddly stuck with me almost entirely due to its locations. Had no clue years later that I would live near it and also co-host screenings out of it. Life is strange and wonderful.”

Cardone believes the unique storytelling made Slayer a long-lasting favorite for genre buffs.

“The combination of the ‘dream world’ mixed with the horror was something new for its time when all other approaches to horror relied on urban slasher stories,” he says.

“The netherworld always seems to stoke imagination and fear. That’s what I liked so much about those ‘40s films by Lewton and others like him. Stories of everyday people steeped in atmosphere and fantasy.”