THE ANNUAL "Places in Peril" list released each year by the Georgia Trust for Historic Preservation is usually heavy on old mansions and firehouses and train depots and the like.

This year, one entry encompasses a whole city — but a city you can’t see.

“Underground Savannah” comes in at number 10 on the list. The effort to include Savannah’s as-yet-undiscovered archaeological record on the yearly tally was spearheaded by Dan Elliott, President and Research Archaeologist at the Lamar Institute.

“We came up with the name as sort of a play on Underground Atlanta,” Dan explains. “Very little of the history from Savannah’s colonial era has seen the light of day.”

As unbelievable as it may sound, Dan says there really have only been two major scholarly excavations of Savannah’s past as a British colony, one dig in the Madison Square area and another in Battlefield Park near the Visitor’s Center. 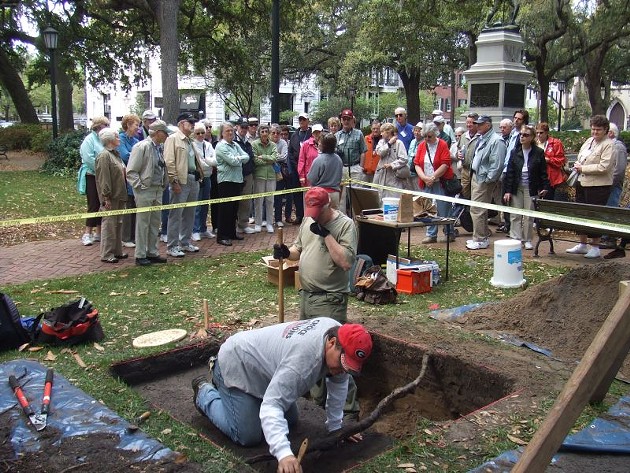 This dig in Madison Square was made possible by a National Park Service grant. It wasn't required by any local or state ordinance.

The latter excavation, begun in 2005, resulted in the long-anticipated find of the Spring Hill Redoubt, a fortification used in the 1779 Siege of Savannah.

“There is some wonderful material, and there’s a lot more to be found underneath surrounding blocks. It’s a shame more attention’s not being paid to it,” Dan says.

“Savannah is a great showcase for things aboveground, but not so much for what’s under the ground,” he says.

Dan and his wife Rita Elliott, who serves as Education Coordinator & Research Associate at the Lamar Institute, say the inclusion of Underground Savannah on the Places in Peril list is intended to call attention to the dire need for an archaeological protection ordinance for the City of Savannah.

Surprised there’s not one already? You’re not alone.

“Everyone assumes Savannah, of all cities, would have an archaeological ordinance. When they find out we don’t have one at all, they’re usually shocked and appalled,” says Rita Elliott.

Rita says there are only 134 such local ordinances in the U.S., none in Georgia.

“The whole idea is for Savannah to have a well-constructed ordinance. It actually would be less of a pain to developers, because they’ll know from the get-go what’s involved,” Rita says.

When I mention to Rita that some people might welcome such an ordinance as an easy way to halt development projects they don’t like, she just laughs.

“99.99 percent of the time archaeology never, ever stops development. Really what we try to do is gather as much as we can before it’s destroyed,” she explains.

Currently, Dan says “The only real local archaeological protection is when a federal permit is involved. Typically around here it will involve a Corps of Engineers permitting process.”

At a time when Savannah is mulling over what to do with its visible Confederate monuments, this is a step Savannah can take to shine light on a much more diverse and appealing chapter in local history.

“This isn’t about monumental history, but about the stories not told. It’s about the women, about the enslaved people, about the everyday person,” says Rita.

Such untold stories would include Native American history too, they say, as in the recent case of a prehistoric shell midden discovered near Emmet Park.

“Cities don’t really erase archaeology as they develop. A city tends to build up like a layer cake,” Dan explains.

If you’re interested in seeing Savannah pass a local archaeological protection ordinance, Rita says the best thing you can do is contact your local elected representatives, from the Mayor on down.

“If this is something people really want to see, that’s the most helpful thing they can do to get it done,” she says.