'Jewels from the Past' opens at Roots Up

THE Betty Alder Nathan collection at Roots Up Gallery needs to be seen to be believed.

The collages take up the entire 90-foot wall at the gallery, which in itself is impressive. But get closer to the pieces and you’ll realize that each collage is made up of easily hundreds of other pieces, all salvaged from thrift shops or her children’s bedrooms. Small toys, beads, other pieces of wood—Nathan glued it all down with a meticulous hand. 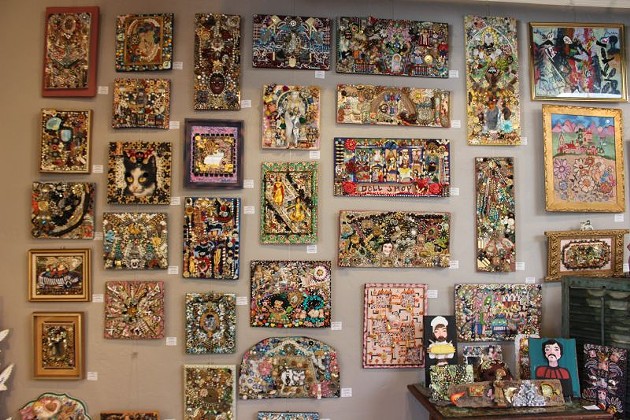 “Her son Harris would say she’d start with one piece,” curator Russell Kueker explains, “but sometimes you can’t quite figure out which piece started it.”

As you look closer at the display, which includes a whopping 170 pieces, the sheer size of the show starts to get overwhelming. Kueker placed some on tables or the floor in an effort to show as many as possible. There are even still 60 or 70 pieces in storage at the gallery.

“I don’t think she could stop,” says owner Leslie Lovell.

Nathan, who passed away in 2014, was clearly a prolific creator. Active on the craft show circuit, she constantly worked on her collages.

“She was very OCD,” notes Lovell. “She was always working on something, but a lot of times she’d sit and work on something. It’d take her eight hours, but she’d finish it in one sitting.”

“She always had things going on around the house,” Kueker adds. “Harris was like, ‘We’re trying to eat and she’s still got her glue out!’”

When Harris approached Roots Up several years ago with the full collection, Kueker and Lovell were fascinated by the sheer amount of work available. The show has been in the work since before their move, but they finally got around to putting the collection together.

“With her work, it helps to show it as one big collage, as you will,” Kueker says.

Nathan’s sense of humor shines through in these pieces. In one, a deer figurine’s leg broke off, so she glued a red bead to the stump and painted blood around it. In another, she painted tiny paintings to go into frames in a living room.

“In a lot of these, you can kind of see there’s smaller bits that she’s cut out and collaged around, and then there are some smaller panels that she decided to put together on a bigger piece to paint and collage together,” Kueker says.

Nathan’s father worked for Liberty Plumbing Supply and would recycle a lot of items, which in turn inspired her to collect items.

“Whatever was in the house was fair game to be hers, so when her kids went off to college, she went in their room and took things and used them, never to be regained again,” laughs Lovell.

The collection also features some of Nathan’s paintings, which give some insight into the way her collages work.

“In contrast with the collages, her paintings, I think, are very well composed,” Kueker says. “The color selection is really good, and they feature her humor as well.”

Lovell says the show so far has attracted a lot of awe.

“At the opening, people were like, ‘What is that?’ They really got it,” she recalls. “Even with the people just looking around, they were like, ‘Oh, my God,’ and then they understood it.”