THE City of Savannah’s proposed Fire Fee continues to make headlines. Recently, Mayor Eddie DeLoach announced that public pressure had mounted against him so greatly that the fee itself was up for reevaluation.

That development was followed a week later by the news that City Manager Rob Hernandez is a finalist for a similar job in Brownsville, Texas. He explained the decision to apply for the job as partially motivated by the “sustained level of criticism and uncertainty” he faces here.

As of this writing, City Council looks set to vote to eliminate the Fire Fee entirely at its regular meeting this week.

But that won’t eliminate the central flaw with City of Savannah finances.

Regardless of the Fire Fee’s fate, let’s take a better look at how the City got into this ‘no win’ situation.

The truth is in the numbers.

The single most important factor to consider in understanding the drive for Savannah’s Fire Fee is that City spending has increased dramatically from 2016 to 2018. 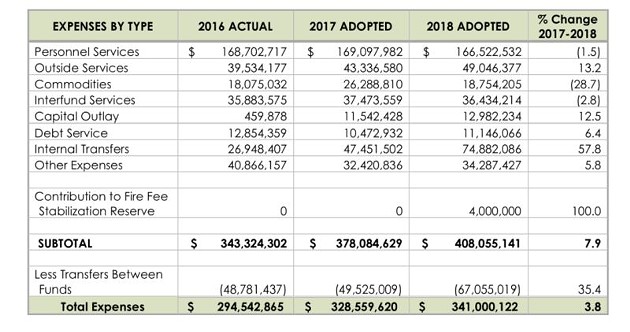 The increase from $294 million in 2016 to $341 million in 2018 represents one of the most ambitious spending increases Savannah has ever experienced.

This begs the question, “Spending... on what?”

In the 2018 City Budget, expenses increased in many key areas including the ongoing premium of de-merging the Savannah/Chatham County Police Department, new departments established in the city staff restructuring, and the purchase of a new fleet of City vehicles totalling a mind-boggling $9,046,062.

The City also took on an aggressive $183 million dollar capital improvement program that will stretch over five years—the majority of which will fund stormwater improvements for new developments such as the Eastern Wharf site (formerly Savannah River Landing).

City Manager Hernandez also included a line item in the budget that would provide a near $5,000 salary increase for 2018, bumping up his salary to over $242,000 per year.

Given that the Mayor and Council approved these ambitious spending increases, the money simply had to come from somewhere. When Mayor DeLoach infamously reported on the City’s fiscal situation in December 2017 that “The cupboard is bare...” He didn’t lie.

But he also didn’t tell the whole truth—that the City’s freewheeling spending resulting from a preventable rift in police services and the expansion of a new vehicle fleet is what emptied the cupboard in the first place.

Another major point that deserves attention is, contrary to the Mayor’s appeal that the spending increase was the result of the public’s mandate to fight crime, Public Safety spending actually decreased over the same three-year period.

With the Mayor and Council’s public image and re-election potential on the line, word has spread that DeLoach and other Council members of the pro-fee camp have enlisted the services of a local PR firm to conduct Fire Fee damage control and pull the public narrative to something more favorable.

Regardless of the spin, the fact remains that the City of Savannah’s spending has greatly outpaced its income in an ever-accelerating manner, as brought on by many actions from the pro-fee camp themselves.

The City of Savannah has already worked its way well into the 2018 budget believing it would be emboldened with the regressive fee. It’s unknown whether staff will have the ability to walk back the budget, or to what degree.

And of course, eliminating the Fire Fee won’t get City Council out of hot water, as they are likely to be embroiled in another dispute over potential cuts to popular arts and social service programs.

With only six months left in the year and the dollars already spent, the numbers tell us we’ve spent our way into a hole. Only leadership can pull us out now.