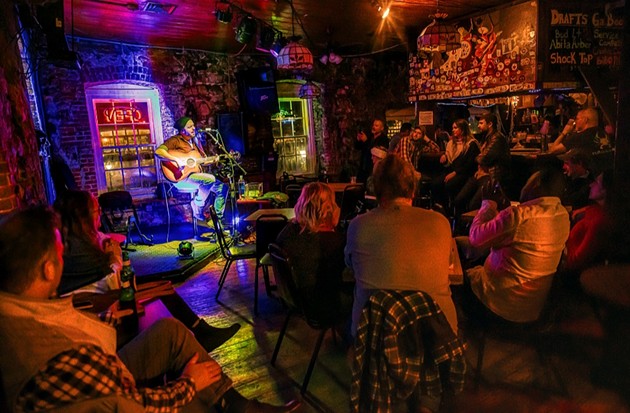 Courtesy of the Bayou Cafe
The small stage at Bayou Cafe welcomed innumerable musicians over the decades.
As the Savannah tourism industry grows, appreciation for locally owned independent restaurants is quickly becoming a thing of the past. Many Savannahians remember several mom-and-pop eateries that were on corners for years before watching their unfortunate shuttering. Harboring fond memories of these beloved spots is getting to be part of what it means to be a local in Savannah, but it still hurts to see another longstanding staple shut its doors. Sadly, at the end of January, River Street’s Bayou Cafe will be joining that nostalgic list. Along with its delicious food, Bayou Cafe has been a spot for soul-filling live music for over 30 years. Despite rumors, Bayou Cafe is not closing due to COVID-19. The property’s landlord has increased the rent, and Bayou management made this difficult decision after weighing the cost of continuing business. Bayou Cafe served as one of the few places in town that put live music front and center, standing the test of time for three decades by providing food and live music seven days a week. While living in Savannah during the heyday of Southern rock, Jerry Zambito − a touring musician in bands such as Tangerine − played at the venue that preceded the Bayou in the same location. He decided to open the Bayou and bring his love of music to the people.
click to enlarge 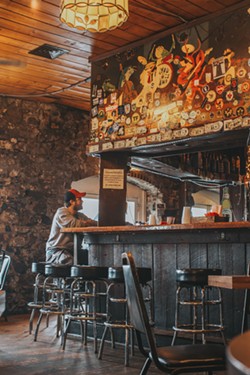 Lindy Moody
The ever-popular bar at Bayou Cafe.
In 1991, Zambito first welcomed guests to Bayou Cafe. Since then, pretty much every Savannah native has stopped into the Bayou at some point during their stumbles down River Street, but few know the storied history of what it has meant to Savannah’s live-music scene. Thomas Claxton, the restaurant’s assistant booker and frequent performer, started his musical career at the Bayou. As a junior in high school, Claxton first played on the Bayou Stage. Even though he is classically trained, much of his music education came from the Bayou and learning from other performers at the Bayou. “After you work with guys like Jerry Zambito and Chief, you definitely are more prepared when you go into major cities,” he told me. After learning from them and starting at the Bayou, Claxton claims he was never nervous onstage performing anywhere else. Though it goes without saying, Claxton also told me that “this place had a serious impact on this area, especially River Street in general. This is a place where people come from all around the country just to come visit every time they are in town.” The quaint stage has hosted a plethora of big names, even drawing other big names to observe from the crowds. Acts like The Black Crowes, Edwin McCain, and Derek St. Holmes have all earned their stripes on the storied stage of Bayou Cafe. When the Black Crowes called Zambito to set up a gig at Bayou, they asked if there was any room for security detail. He jokingly told them that they would have to set them up in the kitchen if they came, because it wasn’t the biggest venue in the world. As legend has it, they ended up coming anyways and were so charmed by Zambito that they asked him to play a few numbers onstage with them. The Black Crowes, incredible though they may be, are not the only famous folks to have walked through the doors at Bayou Cafe. “I looked up from the stage one day and the WWE World Champion was sitting in here,” Thomas told me. It was one of those nights that stood out for Claxton. Like most young boys of the ’80s and ’90s, Claxton grew up watching wrestling. He instantly recognized A.J. Stiles and The Good Brothers, bought them a round, and continued with his show. Spending most of his career learning and growing with the Bayou, it is fitting that Claxton will host the farewell celebration, but he wanted to ensure that patrons remembered the people who made Bayou Cafe so special. “Chief was our house musician here on the weekdays. Sunday through Thursday, from 1991 until he unfortunately passed away in 2011. A good 20 years he was a regular guy up here. I don’t think I met anybody yet that played the Bayou that left a mark on the Bayou quite like he did,” Thomas opined. If you never met Chief, I can tell you that he was an incredible musician. Like any great artist, the music that he played was matched only by his presence onstage − injecting humor and himself into everything that he did. Unlike modern musicians with iPads and holders for their drinks, Chief brought books of music and lyrics with him to every show. He was as old school as they came, and customers still ask about him to this day. When people think back on what made Bayou what it was, visions of Chief will certainly dance in their heads.
click to enlarge 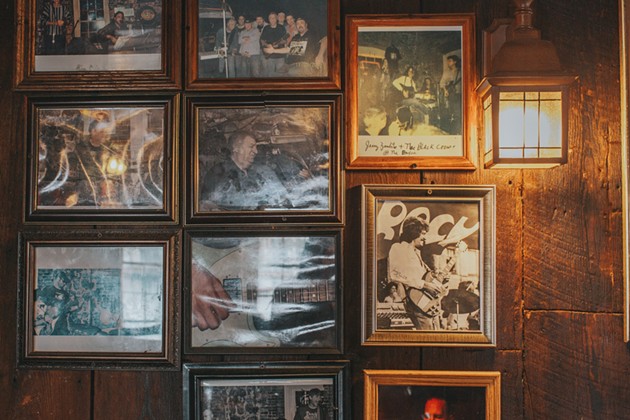 Lindy Moody
Pictures on the wall of fame at Bayou Cafe.
Going out in style, the Bayou Cafe will say goodbye with a four-day celebration. On Thursday, Jan. 28, Claxton will play an acoustic set that he says is inspired by “those old MTV unplugged type of feels, where Alice In Chains was onstage with just their acoustic guitar.” On Jan. 29, John Lee and the Hextons will play and host an open jam for anyone who wants to join in. And for the big finale weekend, Claxton, Paul Cooper, Jo, Willis, and Gordon Perry will play open-jam sessions on Saturday and Saturday dubbed The Grand Jam Finale. Though the doors may be shutting, the Bayou Cafe food truck will continue to carry the torch of their delicious fare. Vince Zambito, son of the Bayou Cafe’s founder, will be all around Savannah filling mouths with delicious bites of Cajun cookin’. The bittersweet closing of Bayou Cafe isn’t lost on anyone that has ever been a part of the family that made Bayou what it was. From employees to patrons to musicians to the folks that sat outside and vibed alone on the cobblestones to the music inside, the Bayou family extends its warmest and most gracious adoration and praise. It’s what both Zambito and Claxton shared as they reminisced about the long history of this long-loved local hangout. Bayou Cafe: 14 N. Abercorn Ramp, Savannah. Visit epicuropedia.com for more by Lindy Moody.