A brush with compassion

Some people are just ahead of their time. Three weeks ago - before it became completely obvious to everyone what a huge, unmitigated disaster the BP Gulf oil spill was likely to be, with no end in sight as of this writing - Lisa Scarbrough decided to do what she could to help.

Using the contacts - both human and otherwise - she's amassed as president of Coastal Pet Rescue (winners of our Best of Savannah Readers Poll for best local nonprofit) she decided to answer the call of another group called Matter of Trust, which aims to gather pet fur to be used as the absorbent part of special booms that soak up oil in the water.

"I first read about it on somebody's Facebook page," says Scarbrough. "It sounded a little far-fetched, so I did some research. I didn't want to do a community effort and then find out it wasn't a real thing."

"We ran it for about 14 days, doing the collection. They give you a point of contact along the Gulf coast, and ours was Pensacola. Everything had to be received by May 20, so we only had a short window to collect the fur. I did get some strange looks at the UPS store when I went to send the boxes," she laughs.

How does one gather the fur? There's really only one way.

"I have Siberian huskies and they have to be brushed out regularly. They have all that undercoat to be pulled out. It takes two to three days to brush them out completely," Scarbrough explains.

"Just for one dog I filled a grocery bag. When I got the first dog done, I thought good Lord, if I can do this much with just one dog, what could I do with several more?" she muses.

In all, Scarbrough and friends gathered over 127 pounds of fur.

That's a lot of fur. Think about it.

"My trunk still smells like fur, so I'll have to get it vacuumed really good," she laughs.

She says that BP - and by now this won't come as a shock to anyone - initially didn't want anything to do with the booms, "even though this is a program that's been going on for about ten years. But they got a lot of backlash about shunning the public, so they've been working with Matter of Trust to use the booms," Scarbrough says.

Scarbrough says while it may not seem like much, the fur collection effort is "a great resource to have, very cost-efficient. It just takes man-hours to make it all happen. And it's a recycling resource, so why not?"

Scarbrough says, "We need to count our blessings that this isn't happening off Tybee - but what if it had happened to us? We go through this every time a hurricane hits somewhere else. It could always be us. I don't think we can turn a blind eye to the industry that's so affected. What if our shrimping industry had been affected by this? There's so much more devastation than what you see from the satellite images.

"We've been able to mobilize and help when there's hurricanes, and I don't think this is any different," Scarbrough says. "When there are communities that need help and we're avaialbe to do something, we need to do it."

One of the oldest adages in the newspaper biz is whatever you do, just don't screw up the crossword. Crossword puzzle fans, of course, are among the most passionate and seriously dedicated people in the world.

Unfortunately, in last week's issue all the answers to our weekly crossword appeared in the puzzle, already filled out.
As much as I'd love to claim it was a late April Fools joke, actually it was an unusual technical error that of course shouldn't have made it to print.

My apologies to all our loyal crossword puzzlers. We'll keep an extra close eye on the puzzles from now on.

One other note this week: Our annual Best of Savannah issue and winners' party were big successes. Many thanks to Club One, who hosted the party, DJ Keith Kozel, who provided matchless musical entertainment, and photographer Josh Branstetter, whose photos from the party you can see elsewhere on this site. 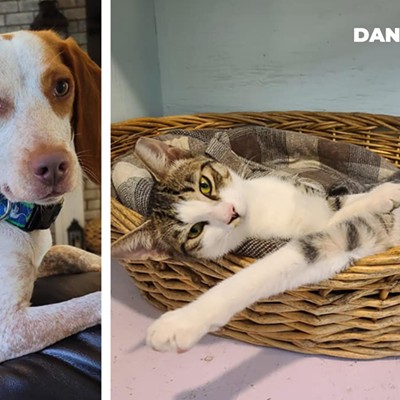