‘A Catholic school on a Protestant island’ 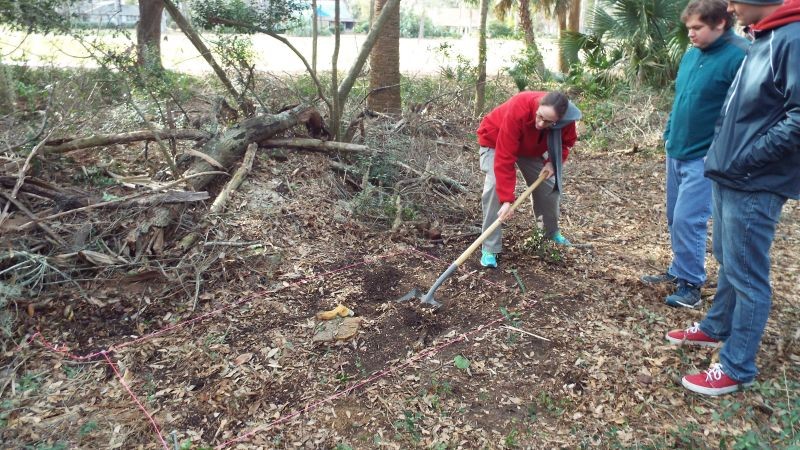 Laura Seifert and her team are digging on Skidaway Island for what remains of an old school house.

WHEN A school falls in the woods, does it make a sound?

Or, to ask the question a little differently, when a school fails, when a church mission fails, when a whole community disappears into history’s ether, does it leave a legacy?

That’s what happened to Skidaway Island’s short-lived Benedictine school for freedmen, a Catholic mission to educate African-Americans after the Civil War. The school lasted only 10 years, 1878-1888. It taught only 22 students.

Armstrong State University archaeologist Laura Seifert is digging it up.

“I haven’t found anything in the United States that compares to it,” she says of the site, next to a Landings golf course. “There’s only been one other freedmen’s school excavated.”

I visited when she and her students were trowelling, sifting, bagging and generally doing the kind of archaeology that makes her profession romantic, bugs and bad weather aside.

“I can sort of see where the building might have been,” she says, trying her best to match historic photos with today’s reality. “Pieces of mortar, plaster and wood, surprisingly. Lots of window glass. There’s a deeper feature there. That might be a wall.”

Seifert, who’s been “digging Savannah” since 2006, has much more imagination than I have. I can’t see anything but a tree-covered lot, sandwiched between big modern homes.

In 1878, Catholic priests imagined this as a place of learning. You have to remember that back then, lots of African Americans, former slaves and their children, lived on Skidaway Island, working the land as they did for generations. The island’s population was about 500.

The Benedictines built a wooden school for them there and put it on brick piers, the only part of it that I could see. Seifert and her students have found a slate pencil, evidence of education, and a “cope hook,” part of Catholic vestments, evidence of a priestly presence.

“I don’t know that there’s always one cool thing that you find,” Seifert says of the hook, something that would have held a cape during benedictions and which, she says, is the most interesting find yet. “It’s a lot of things that come together to tell the whole story.”

Written documents tell us most of the story so far. The school had trouble attracting students and bled money from the Diocese.

“This was a Catholic school on a Protestant island,” Seifert says. “Also, this was a manual school. Students were required to labor in the fields part of the day.”

The farm’s income would support the school. Well, Protestants lobbied for a public school on the island which didn’t require manual labor.

Which one would you go to?

Freedmen wanted better for their children. The school closed and, eventually, within decades, all of the freedmen and their families left Skidaway Island, just as they did Ossabaw Island, after a series of hurricanes.

A slate pencil found near a Skidaway Island golf course shows that a school once stood there.

“It’s actually an avenue of research we’re trying to pursue this semester,” Seifert says. “Where do we find the descendent communities of the folks who were out here?”

Who knows? All we have are a few priestly and educational artifacts, some broken glass in the dirt and desperate letters begging for money in an archive. You might ask, who cares—for 10 years and 22 students? I do. I think about those priests, those students.

But mostly, I think about the fact that we all fail and make mistakes. But our intentions are, I hope and pray, always to improve the lot of those we leave behind.

Soon, the lot in question will be someone’s home, with a view of the 18th hole.