A chat with Tremonti 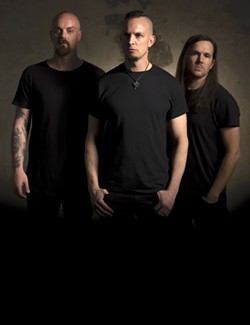 After years of playing lead guitar in Creed and Alter Bridge, Mark Tremonti has stepped into the spotlight.

AUDIENCES welcomed his riffs "With Arms Wide Open" in the late 1990s. Now, acclaimed guitarist Mark Tremonti is blazing his own path.

A founding member of Grammy-winning hard rock band Creed, Tremonti’s guitar work has been dominating the radio for two decades. After going multi-platinum with the records My Own Prison, Human Clay, and Weathered, Tremonti and Creed bandmates Brian Marshall and Scott Phillips broke off and created the band Alter Bridge in 2004.

In 2012, he released a debut solo record, All I Was, a thrash-metal inspired album with Tremonti on guitars and vocals.

On June 8, Tremonti shares his fourth album as Tremonti, A Dying Machine. A concept album that sketches out a dystopian future, the music will appeal to longtime fans of Tremonti’s work and even features an accompanying novel.

We chatted with Tremonti about stepping into the spotlight, writing his first book, designing his own amplifier, and finding new ways to carve his artistic path.

You have a new record coming out on June 8. This is an incredibly ambitious project—I understand you’re writing a novel to go along with it?

To start the record, I wrote the song “A Dying Machine,” which is a concept in itself.

I never in my life thought I would do a concept record—it wasn’t something that I was interested in, it just fell in my lap. I wrote that one song, then the record kind of came to completion.

I thought, why not put this thing out in some story form? Maybe a short story or comic book? I decided I’d do a novel, do it the right way. I’m working around the clock trying to get it done before the release date. We don’t want to force it.

Is this your first time writing a book?

It’s been on the bucket list for a decade; it’s a fictional story, so this is the perfect opportunity to make it my first.

How did the story evolve?

[“A Dying Machine”] was the story behind it all. I really fell in love with the storytelling of that song, and I imagined these characters in my head and tried to put them on this path that would interest me as a listener. It’s been a really fun challenge. Everybody asks if it’s difficult doing it, but I think it’s not difficult when you’re excited about it every day. You have a path to go down to finish the story...it’s almost easier once you get deep into the story.

With a normal record, each song is about something different...you never know until the melody and lyrics come around what the song will be about. I just had a vision for the ending which made it a very exciting journey for me.

As an artist and writer, I’m enjoying writing this novel...it’s been some of the best times co-writing with John Shurley. Every time we get a chapter done, I’m more excited. I’m cherishing these moments.

Storytelling through lyrics is one thing, but how did you use instrumentation and the guitar to tell the story?

I spent a lot of time alone, setting a tempo for one song...we’ve got one at 200 BPM, we’ll go back to 140 BPM, one by one by parts and pieces...whatever came out music-wise led me to what the sound would be. Some would be brash from the perspective of the protagonist; some were more emotional more about the character from the “A Dying Machine” story. To find the sounds, what the story could be about, where else it could possibly go, I had to open up my imagination.

Looking back at the very beginning of Tremonti—what was it like being known as a lead guitarist, becoming a vocalist, and finding that balance?

The hardest challenge was being the entertainer. I’ve always been a shy guy, even when I’m onstage I’m still in my own little world, and being a singer in a band, you’re forced to break out of your box and as far out of your comfort zone. You have to let it all out there.

It was good—I’m definitely still a beginner at that, but every time you go on tour, you pick up more confidence and more ways to get the crowd energized without being cheesy...I don’t what to be a “everybody clap your hands during every song” guy. It’s definitely a new challenge, and just as hard as learning guitar.

Tell me about making your custom PRS [amp] head.

I collect amps. I could collect tons of guitars, but I have my signature PRS guitar...I don’t need to keep collecting others if I can only play one. I have a few old guitars, but mostly I play my signature models, so what I do is collect amplifiers. Whenever I was approached to do a signature amp, I would always turn it down—I never wanted to not be able to use an amplifier because I have this signature model I’m required to play.

But one time, I was searching for amps online and discovered the top-selling amps of the year. They were all low-wattage, low-price amps, all under $1,000. I said, “That’s perfect—I’ll develop a low-wattage, low-cost amp.” Now, we’ve voiced the amp and it’s my favorite-sounding amp. I’m extremely happy with the 15-watt version and people are saying they love how affordable it is.

Were there amps you were using before that you were inspired by for your own model?

For years I had a MESA/Boogie Dual Rectifier—it's punchier and grittier. I wanted something with a warmer wide frequency and a good, heavy wall of sound. I wanted to create that all within one amplifier and then some. I wanted to have a clean channel that was like a Fender Twin—a lot of head room and good presence. The clean channel gives a half-clean, half-dirty tone.

The record comes out in June—what else is on your radar right now?

Rehearsals every day, singing every day so as to not blow my voice out in the first week of tour. Getting the chops back. Reading through edits and revision of the books. It's a good time.