A family's Last Hymn and Hurrah

Trinity UMC bids farewell to its longtime shepherds and residents

To the northwest, the spires of the Talmadge Bridge rise out of the skyline; look east, and there are the leafy crowns of Telfair Square’s massive oaks.

A peek from the west side of the building reveals the sleek interior and mottled shadows of the Jepson Center for the Arts.

It’s a glorious and unique view of Savannah, and Ann Curry is going to miss it.

For the past 14 years, Curry and her husband, the Reverend Enoch Hendry, have called the top floor of this historic church—all 4,800 square feet of it—home. 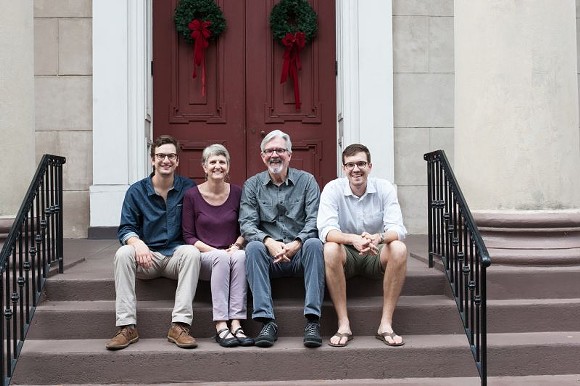 They raised their two sons, Walker and Coran, in the sunny rooms, giving them the distinction of being the second family to live on Telfair Square—the first, of course, the Telfairs themselves.

Now, after 40 years in the ministry, Hendry will retire from Trinity at the end of this month, and it’s time to turn in the keys. With their boys grown and flown, the couple will downsize to a 1,400 square foot bungalow in Ardsley Park that offers a different kind of view.

“We’ll take a lot of memories, and leave a lot of the furniture,” says Curry with a smile as she pets her rescue dog, Louise.

“I’m also really looking forward to opening my front door and seeing my own yard.”

The family will surely remain part of church history. Its first cornerstone laid in 1848, Trinity UMC was modeled after London’s Wesley Chapel and remained open during the Civil War as Union soldiers camped a few feet from the front door.

A fire almost destroyed the building in 1991, and an ambitious restoration project completed in 2005 was recognized with a preservation award from Historic Savannah Foundation.

When Hendry returned to his hometown in the early 2000s to take over the pastor post from predecessor Ralph Bailey, the fourth floor—formerly a youth group center—was built out as a residence for the young family. In return, the couple has served as generous hosts and perennial stewards, not only welcoming other religious groups like the Quaker community but opening Trinity’s airy sanctuary for secular events, including the Savannah Book Festival, the Savannah Music Festival, Savannah Stopover, and the Flannery O’Connor Childhood Home literary lecture series.

The 2005 restoration cost $850K and has been offset by benefits including the Trinity Sanctuary Concert Series and Thursday Night Opry. Organized by local musicians Jared Hall and Jon Waits since 2014, the music series has packed the main floor and balconies with audiences for acts both local and national. Anyone who’s attended a show can attest to the holy perfection of the acoustics and reverential atmosphere, and the series is expected to continue with the installation of the new pastor. 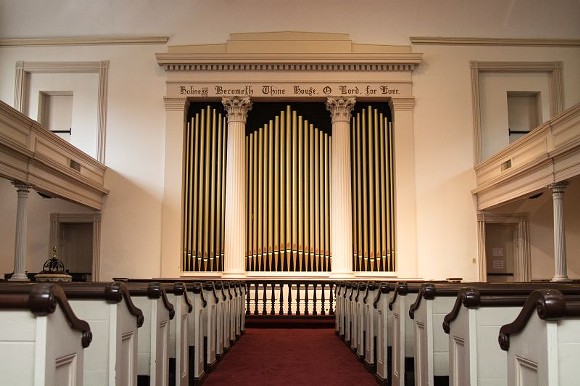 Photo by Jon Waits
Many a secular celebration has been hosted in the acoustically-perfect sanctuary of Trinity UMC, including The Thursday Night Opry featuring local musicians.

There’s still about $325K on the construction note, and the hope is to make one final dent in it with The Last Hymn and Hurrah on May 29. The party features music by Payne Bridges, Waits & Co., City Hotel, Velvet Caravan and the Train Wrecks, plus food by Brian Graves Catering. All proceeds from the $25 tickets go the Trinity Church Restoration Fund.

“Enoch would have liked to go out quietly, but we convinced him to get on board with a fundraiser,” says Curry, with a gleam in her eye that suggests the powers of persuasion are all hers.

They make a striking couple, both tall and slim with silver hair, and it’s easy to imagine them as the young idealists they were when they met at Mercer University in Macon in 1983. While they shared an affinity for Bob Dylan and the Methodist values of tolerance and inclusion, Curry admits she has never pretended to be a “typical” pastor’s wife, earning her yoga teacher certification from Savannah Yoga Center and keeping her maiden name.

“When we first arrived back in Savannah, a parishioner asked me what it felt like to be Mrs. Hendry. I told her she’d have to ask Enoch’s mother,” she recalls with another impish grin.

For sure, the soft spoken Curry has brought a certain free-spiritedness to her role as Trinity’s First Lady—starting with crawling under the building to retrieve a time capsule from 1848. (Sadly, it had apparently been vandalized soon after it was buried, but the metal box, along with a historical document listing its contents, can still be viewed in the small museum she helped curate on the third floor.)

An accomplished photographer who teaches at the Telfair’s summer art camp, Curry studied with icon Jack Leigh, who helped her set up a home darkroom around the corner from the kitchen.

She bakes delicious shortbread squares sold at Brighter Day (under the label Isobel’s after her mother) and still manages a “big girl job” as the volunteer coordinator at Savannah Speech and Hearing.

It’s enough to keep her plenty busy after her husband relinquishes the pulpit next month to Rev. Ben Gosden, who will move into the fourth floor flat with his wife and small children—the third family to live on Telfair Square.

Sticking his head out of his third floor office (one staircase—how’s that for a commute?), Rev. Hendry seems relieved to be winding down his 40-year career as a minister so he can attend to his rock ‘n’ roll biography reading habit and his quest to find the perfect barbecue.

“My church for the next few months is going to be the Sunday New York Times and a cup of coffee,” promises the bespectacled pastor with a grin. 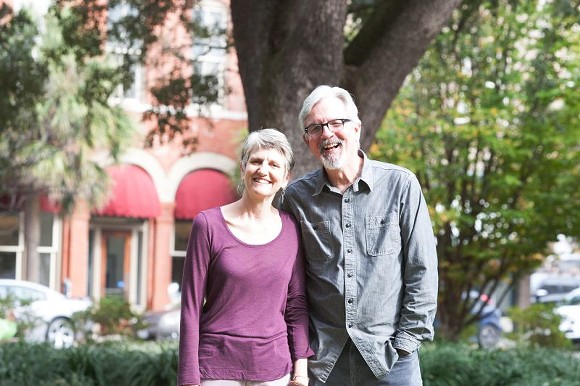 Photo by Lyn Bonham
Ann Curry and Rev. Enoch Hendry have lived on the top floor of historic Trinity UMC for 14 years. The reverend retires at the end of May, and it’s time to turn in the keys.

And so, it is time to bid farewell to Trinity’s marvelous fourth floor. As she rounds the wooden floors with Louise at her heels, Curry ticks off the many memories: Inviting bestselling author Wally Lamb upstairs to see the art piece she created about recovery and grace. Serving homemade chicken fingers to the Tibetan monks when they were in town creating a sand mandala at the Jepson. That time the cat escaped and interrupted an Alcoholics Anonymous meeting.

There is also bittersweetness: The empty silence after the boys went to college. The passing of her mother in the back bedroom from cancer in 2013. The loss of beloved Mr. Alfred Beebe, the longtime Trinity parishioner and custodian who passed away in February.

Pressing the button to the elevator that serves as the front door, Curry admits she won’t miss lost brides wandering into her living room or the occasional congregant looking for afterhours counsel.

“I’ve learned a lot about boundaries living here,” she muses.

“I’ve spent a lot of time trying to compartmentalize my life—church lady, recovery community, family, friendships—and it’s all kind of come together in the last few years. I’m looking forward to a simpler life.”

But she doesn’t regret a single minute of raising her family in one of Savannah’s oldest churches, above one of its most distinguished public spaces.

“Living, worshipping, and raising two fine sons on Telfair Square has been an honor, a pleasure and an inspiration. And to quote a little Bob Dylan, Trinity Church will always ‘have a tight connection to my heart,’” she says with laugh that quickly turns to a thoughtful sigh.

“I never could have imagined all the blessings that have come with living here. It’s just one big ball of gratitude.”