Mermaid Fest will be a fin-tastic time for Pride

'We wanted to do something on Tybee geared toward the LGBT community but welcoming to everybody,' organizer Rich Walczak explains.

12 – 6 p.m.: Mermaids on the Pier at Tybee Island Pier and Pavilion

1 p.m.: Toast to the Shore at Tybee Island Pier and Pavilion

SAVANNAH PRIDE is ready to make a splash on Tybee.

As the St. Paddy’s green washes away from the Historic District, Savannahians will make their way to the beach for a festival that’s anything but ordinary.

The first annual Mermaid Fest will take place on Friday and Saturday at locations throughout Tybee Island. With live entertainment, drinks, games, and celebrity merfolk, it’s a weekend of fun for the whole family.

“We wanted to do something on Tybee geared toward the LGBT community but welcoming to everybody,” organizer Rich Walczak explains. “We have the Pride Festival, but we wanted to do a mid-year event to bring business to Tybee.” 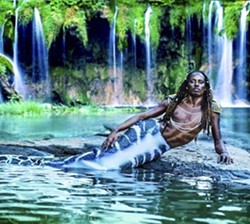 Blixunami, the Geechee Merman, swims down from Charleston.

The end of March and early April marks a lull on the island, and Mermaid Fest hopes to draw attention to the small business that give Tybee its eclectic charm.

Little did the organizers know how much landlubbers positively adore mermaids. The festival is expecting high numbers for its first year.

From pastel-dyed hair to metallic eyeshadow, mermaid vibes are certainly on-trend, and with The Shape of Water earning Oscars and a Splash remake on the way, audiences want to be part of that world. Coney Island has hosted its annual Mermaid Parade for 35 years, and around the world, children and adults are learning to swim while wearing beautifully-designed tails. 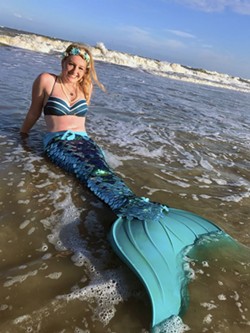 The Southern coast is home to many popular merpeople, several of whom will appear at Tybee Mermaid Fest. The Tybee Mermaid, stunning with blonde beach waves and a shimmering cerulean tail, is Mermaid Fest’s hometown hero. Mermaid Jessica, who hails from Brunswick, is a purple-haired, metallic-tailed role model who advocates for ocean conservation and inspires others to lead healthy lives. Blixunami, the Geechee Merman, is a Charleston-based sensation who has been spotlighted on VH1, Tosh.O, and more. Mermaid Bonnie flashes a shimmering tail that matches her baby-blue locks. Several Florida mermaids, including Florida Springs-based Rivaria and Tsukiko, join in the fun.

“We’ll have a mermaid grotto on the beach,” Walczak says excitedly. “It will be more of an interactive thing than just a photo booth setup. People can walk around with the mermaids, talk, take photos, mermaids will hand out trinkets to kids.”

No celebration is complete without live music. Local favorite Christy Alan Band will welcome the crowds to Tybee Island Pier and Pavilion. Audiences can look forward to additional performances from Lupita Velvet and Shemuel.

If you like sippin’ in the sunshine, join the Tybrisa Twirl, the official Mermaid Fest bar crawl. Bounce between iconic Tybee establishments, mingle, celebrate, and help boost the local economy.

“We’re not charging any Tybee businesses for jumping on board with us,” says Walczak. “We want to bring money to them.”

When the sun sets, the party moves to Huc-A-Poos, where live musical entertainment, drag performances, and more await merfolks and their fans.

“We want to promote equality, love, and acceptance year-round,” Walczak says. “Not only does promoting the festival on Tybee bring business, it allows us to showcase for Pride—a lot of people don’t realize that Georgia has a beautiful coast! This is a safe space. It’s a place where, no matter who you are, what nationality, gender, age, sexual orientation—everyone is accepted here.”