Reenactors will be on hand for the celebration this weekend

OLD FORT JACKSON protected Savannah from seafaring invaders for nearly 100 years. When the fort was built in 1808, the nation's relationship with Britain had worsened. President Thomas Jefferson authorized its construction to protect Savannah from naval attack.

Today, Fort Jackson is the oldest standing fort in Georgia. Named for James Jackson, Revolutionary War hero and former governor of Georgia, it was built on the site of an earthen fort built in 1776.

No battles were ever fought at Fort Jackson, but it was manned during the War of 1812. It also protected Savannah from the Union Navy during the Civil War.

The ironclad ships, the Georgia and the Savannah, patrolled the river. Several “obstructions” were placed in the river to impede traffic.

These precautions all worked, and the Union Navy never got to Fort Jackson from nearby Fort Pulaski. However, Savannah fell when Gen. William T. Sherman’s troops entered the city from the other side.

For 40 years after the Civil War, the fort was used on a limited basis until it was decommissioned in 1905. Today, the site is owned by the state and managed and operated by the Coastal Heritage Society. “We interpret the fort,” says Michael Jordan, public relations director of the CHS.

The first fort wasn’t anything like Fort Jackson. “It had a dirt battery, and it had dirt walls,” Jordan says.

The fort is a popular tourist attraction, and holds considerable meaning for residents. As part of an annual Confederate Heritage Month tradition, three Confederate heritage groups donate a 6-foot by 10-foot “garrison flag” to fly over Old Fort Jackson.

The groups are Chapter 2 of the United Daughters of the Confederacy, the Francis S. Bartow Camp 93 Songs of Confederate Veterans and the LaFayette McClaws Camp 97 Military Order of the Stars and Bars. Also called the First Confederate National Banner, the flag flew over Fort Jackson during the Civil War.

“It wasn’t just a Civil War fort, although that’s its main claim to fame,” Jordan says. “No battles were fought here, and there were no enemy troops here in the War of 1812. There was a fight once where a private knocked an officer in the nose and killed him.”

The fort was very important to Savannah residents. “It was the line separating Confederate Savannah from the Union troops,” Jordan says.

“They had chains and some obstructions across the river,” he says. “The ironclad Georgia was there with her guns pointing down river. It was kind of a gauntlet the Yankees would have had to run.

“Of course, they didn’t,” Jordan says. “Sherman knocked out Fort McAlister and marched in the back door.”

Even in the early 19th century, Savannah was an important port city. “The fort protected Savannah from a sea borne attack,” Jordan says.

“It’s a national historic landmark, the only fort in the nation that regularly fires cannon salutes at passing military vessels,” he says. “The fort’s in a unique spot. They have to pass right by us. The sailors line the decks, blow whistles, shoot back at us.”

Because the fort is owned by the state, the CHS can apply for grants that wouldn’t otherwise be available. “The U.S. Army Corps of Engineers put in rocks for erosion protection,” Jordan says. “If it belonged to us as a private entity, we wouldn’t have been able do that.”

The CHS also operates the State Museum of Railroad Museum and the Savannah History Museum. The CHS was founded in September 1975.

At that time, the state was shutting down historic sites because of a lack of funding. “Within a matter of weeks, the state had padlocked the doors of Fort Jackson,” Jordan says.

“They kept open ones like Fort McAlister because of revenue potential,” he says. “Because Fort Jackson is in an industrial site, it wasn’t considered a revenue producer.”

Unlike later forts, such as Fort Pulaski, Fort Jackson has thin brick walls built in a much different style. “The masonry is really cool,” Jordan says.

The CHS applied for and received a $300,000 grant from Save America’s Treasures to repair the masonry. “The same team that works at the Roundhouse works at the fort,” Jordan says. “They do masonry work on the bricks and have to go work in water up to their knees with gnats and flies.

“We are doing more than just tourist attraction,” he says. “Our biggest business is scouts and student groups. We get thousands every year.

“There’s a scout and student militia where kids are inducted into the army,” Jordan says. “It’s real hands-on and they love it.”

To celebrate the 200th anniversary of the fort’s construction, a celebration will be held Saturday, May 17 from 5-9 p.m. at the fort.

“Admission to the event is free, but we’re asking people to bring a gift,” Jordan says. “We want donations to help us operate the fort.”

The evening will include fireworks and cannon firings, says Jocelyn Xamis, CHS director of special events and projects. “We’ll have children’s games, old-fashioned sorts of ones like the three-legged races,” she says.

“Food and beverage will be available for sale,” Xamis says. “The Skyelite Jazz Band will play and there will be interpretation stations with some of our historic interpreters.”

At 6 p.m., a brief history of the fort will be presented. At 8 p.m., the interpretation stations and games will be shut down.

“We’ll have a cannon salute from the 3rd Infantry Division from Fort Stewart,” Xamis says. “There will be historic cannon firings, and the fireworks will begin.”

A donation from the Savannah River Pilots Association means admission is free. 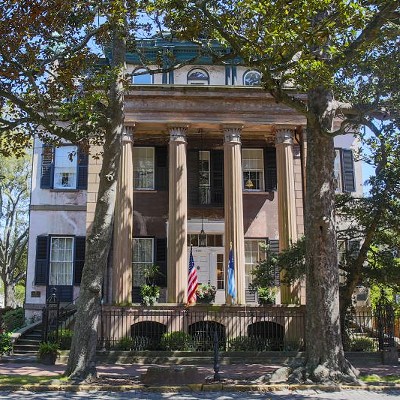