Collective Face stages one of 20th Century's most important plays 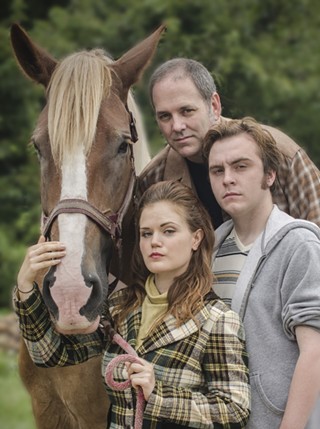 Let's cut to the chase and answer the first question on everyone's dirty little mind: Will the Collective Face's production of the classic psychodrama Equus feature full frontal nudity?

"It's in the contract," laughs director David Poole. "It's very specific that we have to do it in certain scenes as the playwright intended. It's necessary to the plot."

Written by Peter Shaffer, Equus is the story of Alan Strang, a psychologically tormented young man, his violent obsession with horses, religion and sex, and the therapist, Martin Dysart, who tries to help him. It's one of the great American plays of the 20th century.

Premiering in 1973, Equus saw a significant revival in 2007, with Daniel Radcliffe, aka Harry Potter, in the role of the young Alan.

And yes, he did nude scenes as well.

The other big question about Equus has to do with the horses themselves. Not only are horses the symbolic manifestations of Alan Strang's tortured subconscious desires, they must become manifest onstage as well.

"Fortunately in David Poole we have someone willing to take on these things," says Dandy Barrett, the company's business manager. "David has approached this with a clean slate. There are standard ways of doing the horses. Everybody does some sort of man-horse. David's is truly unique."

"The question is always, how do you interpret these horses?" asks Poole. "In the text Dysart talks about the mythic qualities of horses. They have a godlike sensibility. He talks about Greek gods throughout the play."

Poole says the vision crystallized around blending mythology and the idea of some kind of metallic presence.

"The revival with Radcliffe went back to that metal frame thing. Futuristic. Cold, medicinal," says Poole. "We took those ideas and looked at other productions where they'd gone more tribal, and asked, what is futuristic yet godlike at the same time?"

In the end, Poole says he was influenced by the aesthetic vision of the film Pan's Labyrinth. "Of course in the movie the effects are all CGI," he says, "but I was like, OK, I enjoy the aesthetic but it's too nature-oriented for us. So we went with a combination cyborg/Pan's Labyrinth kind of look."

While Poole is handling the horse costumes, Chan Givens is fitting the cast with vintage 1970s clothing to reflect the period of the piece.

Enough about horses. What about the actors?

Contrary to what you might think, the main character isn't really the young Strang, performed here by Zach Blaylock, but the therapist Dysart. The Collective Face tapped longtime local theater veteran Mark Rand for the role.

"The central character here is really the psychiatrist trying to understand a young man's motivation," says Barrett. "He's trying to analyze Alan's out-of-character cruel behavior, but also examining himself in terms of what he's been doing with his life and whether he's truly capable of dealing with the children he's helped."

Consequently, "Mark is onstage virtually the entire play. If you're going to do Equus you have to look very hard for an actor that's capable, not only in ability but someone who can take on a line load like this and execute it well."

Rand and Blaylock "are part of the reason we're so happy we're a repertory company," says Poole of Collective Face, which relies on a stable of actors rather than open auditions for every production.

"Equus is very challenging but it's also a classic," says Barrett. "It falls into the center of what Collective Face tries to do. We had it on our plate for awhile, but because it is as challenging as it is, it requires a company of actors where you can't just throw someone into a supporting role and expect the leads to carry the play. It's a true ensemble piece."

For Poole, Equus is quite simply "one of the best pieces of writing in its century. If you like murder-mystery psychological thrillers, this is the play for you." cs