A living legend of stringed instruments

David Bromberg to appear in Bloomingdale

A masterful musician who’s proficient on the violin, acoustic and electric guitar, pedal steel guitar and Dobro, he’s released over a dozen critically acclaimed albums under his own name since the late ‘60s (including his most recent studio effort, Try Me One More Time, which earned a Grammy nod for Best Traditional Folk Album of 2007), and served as a featured sideman on more than 100 others.

Even if you’re unfamiliar with Bromberg’s own eclectic catalog of bluegrass, blues, folk, “hillbilly jazz” and rock and roll efforts, a quick perusal of any Americana-related albums from the ‘70s onward in your collection may yield numerous guest appearances by this respected player.

Legendary figures such as Bob Dylan, Ringo Starr, Tom Paxton and The Rev. Gary Davis have all sought him out for coloring and collaboration on their projects.

Recently returning to the live stage after a staggering 22-year absence (during which he studied the art of violin making and opened his own specialty shop to build, repair, research and appraise those instruments) he’ll make an extremely rare solo appearance next Thursday night at his old friend Randy Wood’s Concert Hall.

“People are really excited about this,” says Wood. “There are some who think of David the way folks think of Eric Clapton.”

I caught up with Bromberg by phone from his Del. home. 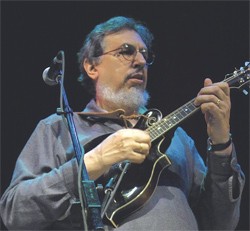 As a young man you started out to be a musicologist, and somewhere along the way caught the performing bug. What initially attracted you to the studying and archiving different types of folk music?

David Bromberg: Well, there’s all kinds of musicologists, not just ethno-musicologists! I probably would have done something relating to folk music, though. I was raised to believe that I would probably be some sort of a professional person, and I figured that if that was a forgone conclusion, that musicology was as close to playing music as I would get.

Couldn’t an argument be made that your own performing career has contained no small amount of musicology itself?

David Bromberg: Well, I suppose someone could make that argument, yes.

You took quite a bit of time off the road awhile back.

What precipitated your return to the stage? Were you just waiting until you had your shop on solid footing?

David Bromberg: I was studying fine violins with an eye towards becoming an expert on them. These days, when I’m not on the road, people bring me their instruments and ask me the when and where of them. Frequently, I am able to answer their questions. Just like playing music, it’s one of those things where no one can ever really learn it all.

How small of a community is there worldwide as far as rare violin experts go? It seems a rather esoteric job.

David Bromberg: Oh, gosh. It is fairly esoteric. I guess most people with some experience in the violin business, either as repairmen or salesmen eventually try their hand at it. But it was always my aim from the beginning. You can’t learn something like this by osmosis. You have to really work at it. I was living for a while in Chicago where two of the foremost violin experts in the U.S. happened to be. One has since left us. He’s no longer alive. But those guys were both very helpful to me. They never stopped studying. And it was a serious type of study. It wasn’t like, “Oh, I’ve been handling fiddles a long time, so I guess I should know what I’m doing.” It was very serious study.

Nowadays you perform both as a solo artist and with a couple of different bands. Does any one particular format hold the most thrill for you in 2008?

David Bromberg: No. I like doing lots of different things. I also go out some as an accompanist. I enjoy that type of work as well.

A great deal of what attracts people to your live shows is the unpredictable nature of your setlists. How many different tunes are currently in your solo gig repertoire?

David Bromberg: I have no idea. A whole lot of them, I think. I know back in the days when I toured with my “big band” I once wrote down our whole repertoire, and it was somewhere around 140 tunes, so I figure I must still know about that many.

I don’t believe you’ve played Savannah in at least a decade and a half or more.

David Bromberg: Oh yeah, it’s probably been two decades, easy. To tell you the truth, I’m not sure if I have ever actually played in Savannah.

Randy Wood tells me he’s been trying to get you down here for ages, but it just never seemed to work out until now. Do you often play intimate, 100-seat listening rooms these days, or is this venue on the small side for you?

David Bromberg: No, I don’t, and it is. That’s been the main reason why I haven’t been able to do it. But Randy has been a friend of mine for a long time and since my wife and I were flying down to Tennessee for a festival in Chattanooga anyway, I figured we’d come and visit Randy afterwards.

Well, he has a great little room that’s perfect for seeing acoustic musicians.

David Bromberg: Knowing him, I’m sure it is. I can’t wait to see it.

How long have you and Randy been friends, and how long has it been since you’ve seen each other face to face?

David Bromberg: We probably haven’t seen each other in person for a decade, although we talk on the phone fairly frequently. He’s referred some customers to me for information on their instruments.

What sort of crowds are you drawing these days? Are they mostly older fans who’ve followed your work for years, or is there an influx of new, fresh faces?

After a 22-year break from playing out live, was it difficult for you to become comfortable in front of crowds again?

David Bromberg: It wasn’t the easiest thing! I found myself in a situation where I didn’t want to play any completely solo shows at all. I’d only perform with my whole big band or with a smaller ensemble that featured Jay Ungar, who’d been a friend of mine for many years.

How long was it before you became comfortable doing solo shows?

David Bromberg: I think this is the first truly solo show I’ve done in forever.

Wow. Well this sounds like it should be a very special event for those who are able to attend.

David Bromberg: I hope so! We’ll see what everyone thinks afterwards (laughs). I have a very good feeling about it.

Will this show focus on your new album or will the setlist be a complete toss-up?

David Bromberg: Oh, there will be lots of stuff. Certainly I’ll play some from the new album. But actually I have two new albums. There’s the one from last year that was nominated for the Grammy, which was just me with my guitar — so it makes perfect sense to play plenty from that one. But I also have another album coming out that’s a live recording of a concert from 1982.

I read something about that on your website. That’s an archival release that you’re selling directly to your fans?

David Bromberg: Well, the story on that one is that I had no idea it had even been recorded. The sound engineer who provided the house sound at that show was a very talented guy, and he’d made a tape on the mixing console as it was happening. What’s unusual is that neither myself or the venue knew that he was doing this. That’s why I don’t mention exactly where it was recorded on the album cover. We just say New York City and leave it at that. A few years ago, at a show of mine he came backstage and handed me a CD of it.

How did it sound?

David Bromberg: I was very surprised. I never realized we were that good, and that the performances from that time period were so tight. That was important, because since this was a straight two-track live recording, it was impossible to do any overdubbing or “fixing” on it even if I’d wanted to.

How long did it take you to decide it was something you’d like to actually release?

David Bromberg: Oh, we did it right away! We’d sell it from my website and at my concerts. But after the latest solo CD did so well, I asked the same record company if they’d be interested in this one, and after hearing it, they liked it a lot and agreed to put it out as well. They re-mastered it, which improved the clarity as much as possible, but kept the integrity of the original recording. So now it has a slightly better overall tone to it. If it had been a multi-track recording we could have done much more, but it’s very good as it is.

That must be cool for the engineer to have essentially made an above-average “board tape” 20-something years ago only to wind up seeing it officially released to great reviews.

David Bromberg: As a matter of fact, here’s something interesting: at that time in my quartet, my mandolin player was Gene Johnson, who your readers may know as the leader of Diamond Rio. At the time he was playing and singing harmony with me. Now, if you go to Diamond Rio’s website, he mentions that the high point of his musical career was a concert he did in N.Y. with a quartet, and this is that very same show. We did three or four gigs like that while he was in the band at this particular venue which is one most performers like to play at. But he specifically mentions 1982, so this is definitely the one.

Finally, as an ardent Bob Dylan fan, I have to ask you about the famous, “lost sessions” you produced for Bob in 1992 and which you and your band play on as well. I’ve greatly enjoyed those four songs that finally filtered out unofficially from the vaults, and while I’m sure you probably get asked this a lot, have you heard anything at all about the possible fate of the rest of that material?

David Bromberg: Yeah. Every now and then, I’ll hear rumors from some of his people that he’s thinking about putting it all out, but then it seems like other projects get in the way and take precedence. Looking back, there’s a ton of great stuff there.

Well, the stuff that I’ve heard, even though it was several generations down from the masters, has a really infectious, fun groove to it that was missing from a lot of his studio work from the same period.

David Bromberg: Which songs have you heard?

David Bromberg: Yeah. Well, those came out of his office. This is the only project of his that’s never really been bootlegged, and that’s because I took the masters home with me every night! So, the leak didn’t come from my side. Those four are the only ones which have surfaced, on the internet, I believe. I’ll tell you that “Polly Vaughan” was my favorite of the whole batch. I thought it turned out just great. I have high hopes that one day all of those tracks will see the light of day. I think people will really enjoy the whole set.