A long way from England 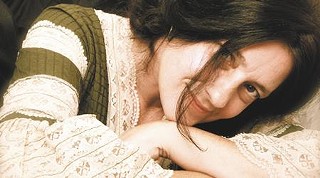 “I’ve always worked with horses in one capacity or other, on and off,” says the British-born singer/songwriter. She’s spent many years making the equine scene – breaking, training, rehabilitation, “all sorts of things, really” – at stables and horsetracks all over the United States and in her native land.

“It doesn’t fit with the music all that well all the time,” Golightly says. “Quite early starts after late nights don’t work out. So it’s had to be on hold some of the time, when I’m on really long tours.”

Golightly and her “band,” the Brokeoffs, some to Savannah July 18 for a show at the Jinx.

The band consists of Golightly’s paramour, a Texan called Lawyer Dave (the name Brokeoffs is – wait for it – a play on the name of NBC’s former news anchor, Tom Brokaw).

The pair recently purchased and moved onto six acres of red-dirt Georgia wilderness, near the town of Danielsville (a little north of Athens).

“We wanted as much land as we could afford, really, and Georgia isn’t the cheapest place to live,” says Golightly. “But we did find one with enough, and a house that was almost serviceable. We’ve had to have the wells dug and all that stuff, but it’s up and running as a house. So it wasn’t like we had to live in a trailer while we built a house.”

Golightly rides a neighbor’s horse every day. “I’m a horse trainer - that’s what I’m qualified to do, on paper. That’s the thing that I had to work hardest at.

“Playing music was always a sideline that became prominent. I started out doing it by accident and thought ‘I quite like this.’ I came from a punk rock background, which means ‘it belongs to the amateurs.’”

They wanted to put down roots in the States, she explains, and Georgia simply felt right to them.

“It’s everything that England is, only it’s warmer,” she adds. “It’s nice and green. Topographically, it’s really similar. Actually, just the bugs are bigger.”

Lawyer Dave, who grew up near San Antonio, was familiar with the rural life. “It ain’t really that much of a stretch at all,” he says. “I’d be back there if I could afford it; it’s just that where I grew up, the land got real expensive in the ‘90s.

“What we do, I reckon we could live just about anywhere. The idea is just to be as cheap as possible. That’ll keep us from having to have the ol’ day job. Which is what both of us have been doing for the last 10 years or so.

“That’s symptomatic of living in a city – you spend all your time making money to pay your rent, and that doesn’t leave you much time to do what you like to do, or get good at what it is you do.”

What they do is a unique amalgam of country, blues and R&B. Golightly, who cut her first solo record in 1995, had been a member of the all-girl, British post-punk band Thee Headcoatees. “None of us could sing at all,” she says.

The old stuff’s been in her blood for a while now. “When I was a teenager and started buying the music I liked,” she says. “I sort of regressed rather than kept up with the times. So punk bands that I was going to see would be doing covers of ‘60s R&B songs, and those R&B songs would turn out to be old gospel songs. It all comes down to church music, really.”

“It’s just folk music, and I think Britain brought a lot of that here too, in some respects. Folk music’s folk music. I’m not an expert, by any sense of the word, on either country or blues music. I mean, I know what I like, and I like what I like, but I’m certainly no aficionado.

“It’s just something that came easily to me. I’m not a virtuoso guitar player. I’m just somebody who can string words together and play a 12-bar blues.”

Her friends Jack and Meg White, “stablemates” on an independent label a few years ago, keep in touch with her. Golightly sings on the track “It’s True That We Love One Another,” on the White Stripes album Elephant.

“It was really a test track – it wasn’t recorded at the same session as the album,” Golightly explains. “They did a few tracks, just to try the studio out, when they had a couple of days off in London. It got included on the album because they liked it, I guess. And Bruce, my longtime drummer – and my best friend – did the sleeve. So I guess they wanted some kind of English connection.”

Hmm. A band with one woman and one man – Holly Golightly and the Brokeoffs have something in common with the White Stripes.

But the comparisons end there. The Holly & Dave Show is hypnotic rather than hard-rocking. Her rockabilly stuff swings, and she sings in little-girl whispers, or a hardcore twang, while strumming a guitar. Dave’s on guitar, bass … and a few other things.

“Dave had been playing standup bass in the American touring lineup of my band for about 12 years, on and off,” Golightly says. “And we just had a notion to do something where we could do it nice and easily, in a small vehicle, without a double bass.

“But we didn’t want to do anything that we got bored with. Standing up and playing two guitars, neither of us could have maintained enthusiasm for that. So he came up with this notion of a split drum kit, which he has built himself.

“It’s pretty amazing. It’s not just your regular sort of oom-pah bass drum, it’s all kinds of remotes and cymbols, and all sorts of things. And he plays it with his feet.

“For the first six months of playing live, we couldn’t look at the contraption because it was so ridiculous.”