NOW THAT Georgia’s reopening is well underway, restaurants have found themselves between the proverbial rock and a hard place.

After they already lost the cash cow of St. Patrick’s Day, the pandemic swept in and effectively shut down Savannah’s service industry. Now, these restaurants are opening their doors to a totally different industry.

I heard from my fellow service industry friends horror stories of people refusing to wear masks and their jobs not following proper protocol.

But is that really how it is everywhere? What’s it like being back at work right now?

To find out, I talked with 17 people in various positions in Savannah’s service industry, from managers to servers and even an Uber driver and retail employee. Some chose to remain anonymous to protect their identity.

Here are some things I learned. 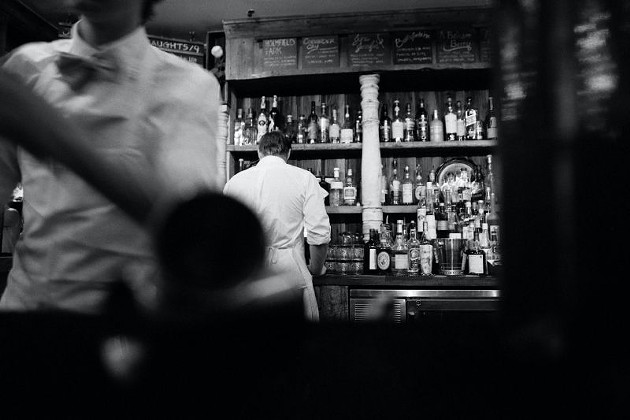 Things have been busy.

Memorial Day weekend, for many restaurants that reopened, was very busy.

“It was the St. Paddy’s Day that never was,” says Abbey, a downtown restaurant employee. She estimates that on the Saturday of Memorial Day weekend, her restaurant received three times as many orders as they normally would in that time frame.

Over Memorial Day weekend, H, a food and beverage manager in a hotel restaurant, had a crowd that they didn’t feel prepared for, so they sought the help of their supervisor.

“I was asking questions about our restaurant; I know we have a limit on how many people we can have based on our square footage, so what is our number?” says H. “And all those questions I asked—what are the protocols for spacing people out? What sort of authority do we have over people not following guidelines? All those answers were, ‘That’s okay, don’t worry, we’re not going to get that busy.’”

However, because it was Memorial Day, sales were up the previous day, which H says their superior knew. When H sent home a staff member because they were sick and asked to bring someone else in, they were told no by their superior.

“Whatever you do is going to be money for me,” says H of their employer.

As a result, H got slammed and was pulling more than double duty as customers got angry.

“I know they don’t want to keep applying for unemployment on our behalf, so they’re trying to get people to come in and work hours, but you can’t open up safely if you can’t staff enough people,” says H.

“If you can’t afford an extra $40 a night for a server to take orders and clear tables, then we shouldn’t be open. They knew how busy we were.”

S is a bartender at a restaurant that isn’t downtown. They’ve reported their concerns to management, but they fall on deaf ears.

“Honestly, they say I’m being difficult,” says S. “When we switched from to-go orders to using plates, I didn’t feel comfortable with that. I cried.”

Yet the change still happened, and S had to keep working anyway. So, their recourse is to be as safe as possible for themselves.

That’s also the plan of G, a cook downtown.

“It’s the people that are making it difficult out here,” says G. “You think it’s all these businesses being bad, and it’s not—it’s the people. Nobody wants to listen. Everyone gets mad they have to wear a mask.”

The mask thing is a big issue.

Who ever knew that a face mask would become such a political statement?

Everyone has an opinion on the mask, and they seem to think that they need to inform their server of how they personally feel about the mask.

“Someone said wearing the mask offended her,” says G. “A lot of people complain about the staff wearing masks and I’m like, ‘Well, it’s not affecting you. We’re doing it for customers.’ People around us don’t want to do it, and that’s what worries me. Please just play along.”

S, a driver for Uber and Lyft, is not a fan of the mask, but plays along.

“Here’s the mask thing: I’m not a mask person. It ain’t me,” says S. “But if a passenger gets in my car wearing a mask, I’m going to put my mask on. That just makes them feel better. I do drive a little faster to get them out of my car so I can take my mask back off.”

Gentry Hutcheson, the manager at Yia Yia’s Kitchen, says that the backlash businesses face for not wearing masks is the main reason they wear masks now.

“That’s probably 80% of why we’re wearing them now,” she says. “We’ve worked through the whole thing without them because they weren’t pushing them like they are now.”

Hutcheson also brings up the issue of overheating while wearing a mask.

Wearing a mask can be very hot, especially in Savannah summer heat. Some report that the masks cause acne, and of course they make things even hotter.

Kara Dailey, a server at Kayak Kafe Midtown, says it was difficult at times to enforce the policy of wearing a mask. Turning someone away, she says, was never received well.

“We’d basically take orders outside in the parking lot,” she says.

Lots of tourists or non-residents are here. Like, a lot.

L is a downtown restaurant employee who worked on Memorial Day weekend. The amount of people there was enough for L to never want to return to that job again.

“A man went off on me because the bar was at capacity so he couldn’t order a drink, despite his table time and time to getting a server being only ten minutes.”

L estimates that most of the people at the restaurant were from out of town, which is apparently very common.

“I’ve noticed an influx of tourists or non-residents,” says S, the Uber driver. “Some folks were here visiting parents, which is understandable. Some folks were just here because they had to get out of the house.”

A, a retail employee at Oglethorpe Mall, also reports a lot of people.

“What’s going on right now is insane. So many people coming to the mall and shopping—no masks, no social distancing, getting upset that fitting rooms are closed,” says A. “I don’t feel safe. In fact, a customer told my boss she was here from New Jersey, and she had come to Georgia because she thought she could shop without a mask. She was upset that most stores were requiring masks.”

Not everyone hates their job right now.

Luiz Santos, a bartender at Bar Food, is glad to back at work and out of the house.

“I think my positive experience has come from the fact that Bar Food is a neighborhood bar, so it’s a tight community,” he says. “I think everybody was just excited to be out of the house and going somewhere they’re comfortable with and trusting, knowing, that the owners and employees are doing the proper measurements to make sure their guests are safe.”

“When we first went back, I was pretty anxious,” she shares, “but once it hit the three-week point, which was past when symptoms would show up, the anxiety has gone way down. Most of the people that come in are really aware of what’s going on.”

Mariah Howington, who works at Service Brewing, is proud to work where she does.

“With Service being veteran-owned, the safety and wellbeing of our staff and our customers has been put at number one,” she says. “It makes me proud to represent a company like that. They’re there with us every step of the way.”

Thomas Mizelle, a barista at the Coffee Fox, feels safe at his job.

“I’m fine with being at work,” he says. “I appreciate that I was able to still work and cut up the monotony of being home. I’ve never felt unsafe.”

Servers are scared, but still have to work.

A is a server at a restaurant just outside of downtown.

“Everybody working in food and bev or retail right now is literally trying their best,” says A. “It is without a doubt 100% more exhausting on me now to be in the industry than ever. I just feel like I’m giving a lot to do this, and what I’m getting back just sucks.”

“It’s all just a double-edged sword,” says Abbey. “I’m taking the precautions. I’m more afraid that I’m an asymptomatic carrier and I don’t know it, and I could give it to someone else in the community, than I am of getting sick.”

It’s been difficult adapting to the new normal.

“We’re changing how we approach things every couple weeks,” says Thomas from Coffee Fox. “It’s a lot of headache and a lot of work. We’re provided masks; we have Plexiglas sneeze guards.”

“We’re changing policies in real time as the news says different stuff,” says Kara from Kayak Midtown. “We try to over-communicate, but I get walking into a place and being like, ‘What are the rules? I don’t know what to do.’”

“When you go to a restaurant, read the signs,” says S the bartender. “If you’re confused, ask for help.”

This is an uncertain time for people in the industry.

Caroline Rose, a bartender at Green Truck, remembers the last shift she worked being very strange.

“When we left that night, we were all hanging out, having a couple drinks,” she says. “You look around and are like, ‘Man, I really don’t know when the next time I’m going to see some of these people is.’ If we don’t reopen, or if they can’t afford to not go back. It was weird to think about.”

“This industry will stick together. We will support one another,” says Kyle Law of Alleycat Lounge. “The past few months have forever changed the food and beverage landscape, and it obviously does not end there. It would be ignorant and short-sighted to believe we as individuals are alone in this new chapter of societal norm.”

“I love working for a small business right now,” says A, the server. “I love seeing people from other small businesses coming in and still being regulars, still leaving us tips. I’m trying to do this for you.”

Have empathy for your servers—and tip!

“Everybody should take a step back and be patient with their servers,” says Luiz from Bar Food. “Put yourself in my shoes. How would you feel knowing that you have 50 other people to make drinks for, and take their order? I don’t think customers who have never done this understand.”

“Be nice, be compassionate, and tip. Just tip,” says A, the server.

“Respect our rules,” says Kyle from Alleycat. “They are there for a reason, and no one ever said we like them any more than you do. Next time you’re sitting in a drive through at Burger King, please fucking be nice to us. Or at least as nice to us as we are to you.”