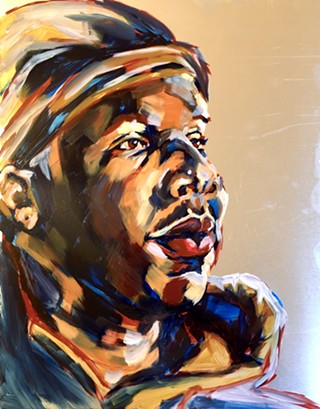 Purvisha Peshwe (M.F.A., painting candidate at Savannah College of Art and Design) has been working on her senior thesis “Wall of People” for more than a year now and it’s something that she wants to continue. Her previous experience from her background in film and television in India informed a lot of her work. The thesis will be on display at Cedar House Gallery Nov. 13-15. "The process of storytelling, the interaction that I have with my sitters during the painting session is as important to the final result as the technicalities of portraiture itself,” says Peshwe. “Which is one of the reasons why I call it the “Wall of People” and not just a wall of paintings or wall of portraits. She paints life restricted to just the session. Her subjects come from places all over the world from SCAD Lacoste (where she studied abroad) to her hometown Bangalore, Karnataka, in India. “I see them as moments I have shared with people individually and when the viewer looks at these paintings I don’t want them to try to figure out their skin color, race or nationality, or if this person looks like he’s poor or rich or any of that.” In her thesis, Peshwe defines commonalities of people by painting with a limited palette. She defines her color choice as a spontaneous decision based on the emotions felt by the interaction between her and the sitter. “All I wanted to see was the emotive quality of their faces and try to understand if there was a moment of self-reflection going on with these people, in these moments while they were sitting with me and talking to me, and I want them to be able to question themselves.” All paintings are for sale on her website. However, the artist encourages an in-person experience due to the reflective aspect of her work that can’t be captured in the photographs. “It’s about how I use portraiture to delve into people’s personalities, and how I try to bring it out by using unusual colors on reflective aluminum,” says Peshwe. “When you look at the painting through the reflective substrate. You can see parts of yourself and fractions of yourself in it. I want them to use that as a way to reflect on themselves.” “It is a study of the human psyche in the end.” For more, visit purvishapeshwe.com/ or follow her on Instagram at @purvishapeshwe.