A Most Auspicious Time

I HOLD A firm and somewhat nervy belief that once you’ve been to someone’s wedding, you’re part of the family.

Jon Waits has already felt like a Brother from Another Mother for some time now, though I’m not really sure how we met. All I know is this shaggy tattooed guy showed up with a camera bag one day at the Connect office and has been answering my last minute requests ever since to take photos of salad and shoot a unicorn. (With the camera, people, come on.)

In addition to his award-winning photography skills, this Jon-of-all-trades is also some kind of musician, fronting the indie-Americana outfit Waits & Co.

He knows his way around the social media labyrinth and can sling a mean espresso shot in a pinch, but my favorite talents are his sympathetic ear and ability to hold an entire conversation without removing the Marlboro from his mouth. 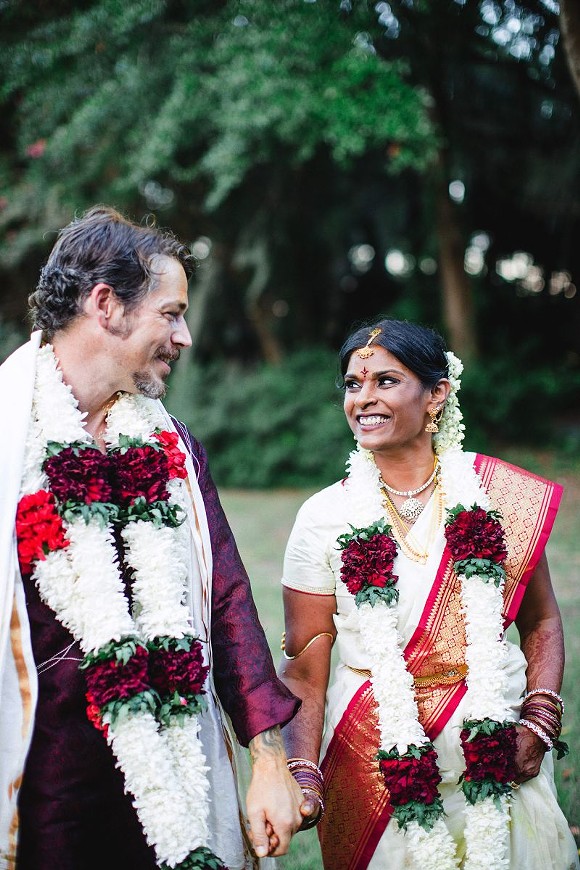 Photo by Izzy Hudgins
When a Southern preacher’s son marries an Indian American woman from California, it’s going to get colorful.

Those who count him as a friend were overjoyed when he announced his engagement to his longtime love Anita Akella, a San Francisco sister who I’ve always adored for her wit and style. It remains a mystery how both of these ridiculously good-looking, intelligent, funny, kind people made it into their 40s without being snatched up, but it may have something to do with the vagabond lifestyles they both led before settling in Savannah.

Ivy League-educated Anita worked all over the globe in environmental conservation and currently teaches business design and arts leadership at SCAD.

As for Mr. Waits, the short version goes that it took the Atlanta native a minute to get his grown-up act together. Or as he puts it with a shrug, “I spent a lot of time wandering the highways ‘looking for myself’ only to discover I was ‘here’ all along.”

The couple was introduced through mutual friend and hotshot playwear couturier Lane Huerta (ICYMI, Savannah-based Lovelane Designs has hit the big time this year.) Legend has it that Jon and Lane—along with contemporary art maven Susan Laney—met in the 80s through, for real, Bible camp. A teenage crew of rebel creatives hiding cigarettes and black nail polish behind the rectory? Sounds like the North Georgia version of the Breakfast Club.

Like many unions that don’t involve officiation by an Elvis impersonator, Jon and Anita’s nuptials were planned around the sacred traditions of their families. (Then again, maybe your parents worship Elvis, no judgment!)

He’s a preacher’s son, she hails from a large Indian family. Figuring out how to accommodate their respective Southern Methodist and California Hindu heritages proved complicated, so they decided to hold two events—though talented artist Rubi McGrory did manage to represent their melding of cultures into a gorgeous mandala of acoustic guitars and lotus flowers on the invitations.

The first ceremony was a private affair held earlier in the week at Trinity United Methodist Church, attended only by actual family members and a handful of others. A sneak peek of Izzy Hudgins’ crisp photos show that the groom wore a tux and the bride a strapless white gown, the first of several stunning wedding ensembles she’d don before all the holy matrimonial deeds were done.

A few days later the rest of us wedding groupies gathered under the oaks at Oatland Island Wildlife Center for the Kalyana Samskruti, the traditional Hindu wedding ritual that can last up to several days to fulfill the dozens of sacred steps required of the sacrament of marriage. 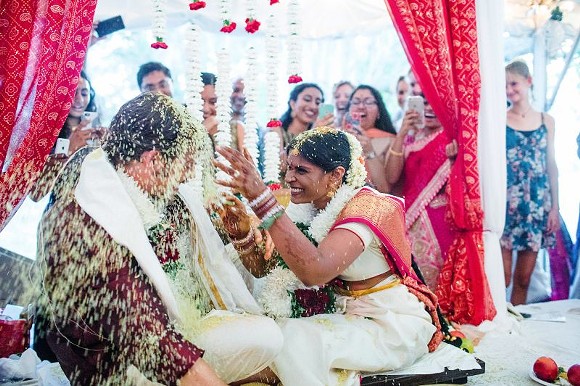 The Akella clan had scaled back this glorious celebration to one afternoon and evening, perhaps making up for any abbreviations by decking the trees, canopies and guests with all the scented bloomage available within a 100-mile radius.

Wafts of jasmine and sandalwood floated from massive garlands strung above the chairs and tiny gajras to pin in our hair, handed out by a bevy of beautiful young cousins dressed in jewel-toned saris as we gathered to sign the guest book.

“Oh, there’s no rush, there’s plenty of time,” they assured with knowing smiles as they dabbed our foreheads with turmeric and ochre.

Some guests arrived in traditional Indian garb, and all followed the edict to dress colorfully: Teals and turquoises, purples and plums, marigolds and marmalades swirled in a kaleidoscopic cloud around the pavilion set up under the trees, where the motion of a hundred bamboo fans gave the effect of dancing butterflies. Those used to layering up in sequins in the swampy heat appeared unfazed, but surely there is a market for a seersucker sari?

The Vedic priest led preparatory prayers as we milled around drinking tamarind juice and masala chai until, striding across the grass dressed in traditional Indian kurta, appeared the remarkably well-groomed groom. Practically clean cut, even. Though ever the irascible cowboy.

“Someone just told me I looked like an extra from the Sgt. Pepper album cover,” he grinned before being swept away by his bride-to-be’s uncles for his official welcoming.

I’m always so proud to roll up to any wedding with my own handsome betrothed of almost 18 years, like maybe when we clean up and forget to bicker about the dishes, we might be pretty good advertising for this marriage thing. The humidity soon dissolved that notion along with my eyeliner. Yet somehow Ann and Andrew Hartzell right next to us managed to remain unwilted—maybe because they’ve been married ten years longer.

My man and I held sweaty hands as the spiritual story of supreme protector Lord Vishnu and goddess of prosperity and happiness Lakshmi began to unfold.

Prayers were offered to Lord Ganesh, the elephant-faced god that removes obstacles and clears the path to success. Soon after, a steady breeze began to blow in off the marsh, no better evidence of Ganesh’s blessing.

After more divine deeds, the bride, hands and arms decorated with henna, was carried to the mandapam (marriage pavilion) by her family in a giant bamboo basket, her gold bangles and cobalt blue sari evoking the image of a magical, breathtaking bird.

Two cousins held a red scarf between the couple as the priest continued the benedictions. The sun began to slide sideways, and the priest’s Sanskrit became almost hypnotic. Reflecting sequins cast a shimmer on their faces as the couple sat so close but not quite together yet, a single sacred moment stretching into hours.

This was my first Indian wedding, yet the scene somehow reminded of my own, which also included rituals of seven steps and much chanting in a foreign language.

Having attended her share of rabbinical events, the fabulous Ikeda Feingold agreed on the similarity, adding that the intonations and flowers reminded her of Shinto rituals learned from her Japanese mother as well.

Maybe it’s a universal truth that up close, devotion all seems the same.

The same might be said for joy. Watching the faces of their parents, James and Fentress Waits and Jagannadham and Lalita Akella—themselves from such different spiritual traditions—I witnessed the same expression of adoration and happiness that their grown children have found their own devoted partner here on earth.

After more chanting and a couple of clothing changes later, the priest paused to announce, “We have now come to The Most Auspicious Moment.”

In Indian culture, “when the stars align” isn’t just an expression, it’s doctrine: Months ago, Vedic astronomers determined the precise date and hour that Jon and Anita’s union would be luckiest.

Called the subhamuhurtham, the entire event had been building up to 6:22 p.m., which I almost missed because of a quick trip to the loo.

I needn’t have worried since The Most Auspicious Moment took another couple of hours, ushered in by holy lamps and marked by an exchange of toe rings, which is about the cutest wedding tradition I’ve ever heard of.

Finally, the last step was fulfilled as Anita’s family symbolically handed her over to Jon’s family, with promises elicited that they will love her as their own.

The tent erupted in a rain of rice, as Indian families also take the term “shower with blessings” quite literally. I almost forgot to cry as the bride and groom poured rice and flowers on each other, surrounded by cheers, laughter and love.

I’ve never heard of a culture that doesn’t celebrate special occasions with food, and the traditions continued with unbelievably delicious tikka, paneer and dosas from NaaN Appetit (check them out on Pooler Parkway.) Ganesh’s breeze held steady as the sun melted past the picnic tables into the marsh in shades of gold, saffron and rose.

You’d think this wedding would be over after almost six hours, but this is the South, y’all. The couple had one more wardrobe change in store for their first dance, shedding the sari and khurtan for a minidress and jeans at at El-Rocko Lounge, courtesy of Jon’s longtime compatriot Wes Daniel.

Even after sitting cross-legged all that time, they do-si-doed to Kenny Rogers and Dolly Parton’s “Islands in the Stream” flawlessly—a testament to their perfect timing.

(The happy couple did experience a bit of an inauspicious start to their honeymoon two days later when Delta canceled the first leg of their flight, but they’ve landed safely in Thailand and are now enjoying what heat and humidity feel like on the other side of the world.)

To this nuptials nerd, every wedding is holy and an honor to attend. Jon and Anita’s was made more enlightening in how quickly the exotic can become familiar when we share in others’ traditions.

Now, which one of my new relatives is going to teach me how to cook paneer?

It’s not just about the honey, honey

Who's the cougar now?

Dancing with wolves, for real