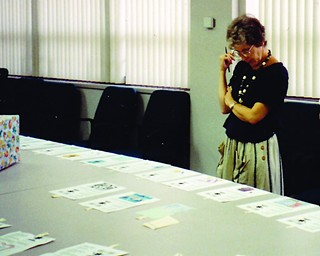 Jewish Journeys is free and open to all. Get the schedule and RSVP for workshops at 355.8111 or savannahjea.org.

What do you do if you miss your mother–in–law?

"Reload and aim better next time" goes the old joke. But if we're going there, I'm more partial to this one:

Two friends were having lunch and drinking wine. One says to the other, "My mother–in–law is an angel." The other sighs, "You're so lucky. Mine's still alive."

In that scenario, I'd be the first lady. My mother–in–law hasn't given me much reason to grouse. When I first married her younger son, she would write me sweet letters saying how glad she was to finally have a daughter. She once bought me a wicked pair of black leather pants on sale.

The extent of her meddling was to gently remind me in her soft Virginian drawl that if I was going to swear like a sailor in front of my kids, I shouldn't act so surprised when they repeated my curses to the cashier at Publix.

Around 12 years ago, as she was recovering from breast cancer, Marcia's memory loss and fuzzy–mindedness were diagnosed as degenerative frontotemporal lobe dementia, a condition similar to Alzheimer's and just as awful. Slowly, slowly ever since, she has been slipping away, surrounded by my devoted father–in–law, doting brother-in-law and kind, capable caregivers. She lives at home in a sort of shadowland, warmed by blankets she knitted with her own hands, her physical self still present but her essence long gone. We visit often to stroke her soft cheek and croon small, soothing songs. Our house is just a block and half away from where she sits, but most days it feels much further.

Her dear friend Carol Greenberg called recently to say that she wanted to include an art piece of Marcia's in a new exhibit at the JEA and wondered if I would write the artist's statement. My throat caught at the thought, though I am quite familiar with the piece, having walked past it almost every week for years at Congregation Mickve Israel, where kids see it in the hallway of the Shalom School. Marcia's handloom weaving depicts the Tree of Life as a mossy, grand live oak, as consummate a representation of Southern Jewish heritage as there ever was.

I know that she labored over it as a donation in honor of my husband's bar mitzvah in the early 1980s. The idea of coming up with the sentient statement it deserved befuddled me, mired as I was with the details of our own son's upcoming bar mitzvah earlier this month. As much as I wanted to honor my MIL, I just wished she could help me stuff all those damn hospitality bags.

But you don't say no to Carol, with her infectious Judy Garland–Mickey Rooney"Let's put on a show!" enthusiasm. As the exuberant director of Morningstar Cultural Arts, Carol has been organizing art shows and poetry readings and music concerts for the past 24 years, long before Savannah rose like a sunrise on the national cultural landscape.

Though she modestly describes Morningstar's inception as a way to "keep myself entertained," Carol has showcased hundreds of artists over the years and shepherded legions of volunteers, including my MIL. I can easily imagine the two of them in someone's living room, hopped up on sweet tea and planning yet another titanic event.

Jewish Journeys promises to be another epic Morningstar undertaking, with 24 artists and dozens of discussions and workshops over 18 days, beginning Wednesday, Feb. 27. Inspired by but not limited to a Jewish perspective, it encompasses art, culture, healthcare and a smorgasbord of programming, including a re–fashioning of old earrings while enjoying ukulele music, a lecture with bestselling author and native son Bruce Feiler and an inspirational drawing class with Bruce's mother, Jane Feiler.

Though Carol barely slowed down during her own bout with ovarian cancer a few years back, she intimated that Jewish Journeys might be Morningstar's last major production. Understandable, as much has changed for the organization in recent times, including the passing of two of its most impassioned volunteers, community movie icon "Hollywood" Ron Higgins and financial whiz/fashion plate Ruby Perlman (the pink fire truck you may have glimpsed around town is dedicated to Ruby.)

"We really have done everything we set out to do, and there are so many wonderful arts organizations in Savannah now," said Carol with characteristic conviction. "It's a good feeling that the work goes on regardless of what happens."

Her voice broke as we talked about Marcia, her first friend in Savannah and a constant companion on her journey, Jewish and otherwise. We lamented that though Marcia is still with us, it's hard not to speak of her in the past tense.

"Your mother–in–law was a wonderful person. She was slow and determined with everything she did, and she always did it with joy," Carol said as we both sniffled.

That sums up the Marcia I knew, too. She was also valedictorian of her high school and attended Duke University, where she met a nice medical student from Tampa named Harvey. She pursued art late in life and received another diploma as part of SCAD's first graduating class.

She was a patient French teacher at Windsor Forest High. She a fearless crafter and a perpetual volunteer. She has been the best mother-in-law a girl could ask for, though in the interest of full disclosure, I admit to being no fan of her cooking.

It will be strange to see my words on her work at the JEA, where she spent decades with Carol and the rest of those fierce volunteers. My husband and I brought her to the Senior Lunch Bunch there for five years, first dancing, then shuffling, then in a wheelchair, until we couldn't lift her out of the car anymore. We didn't move back to Savannah until after she became sick, and the majority of my time as a daughter–in–law has been spent watching her leave us bit by bit.

But it wouldn't matter if the loss had been sudden. A friend of mine lost her mother-in-law in an accident this week, leaving a hole in her soul that I recognize. The absence of your husband's mother — the only other woman on earth who knows him as well as you do — holds a universal keenness.

Years ago, on my first trip to the Old South, Marcia brought me to Mickve Israel, the historic synagogue where she pioneered the docent program. We walked quietly through the grand sanctuary to the old social hall, where she showed me her Tree of Life on the wall, so very proud as she ran her fingers down the textured yarn.

I remember thinking how wonderful it is to weave a long, lovely life, full of activity and art and dear friends. That was the same day my mind lit up with the certitude that I'd marry her son one day, though I couldn't possibly have known what else the future had in store for any of us.

What do you do if you miss your mother–in–law?

You pray and pay homage, grateful that you got to know her at all.