A musical homecoming for a good cause 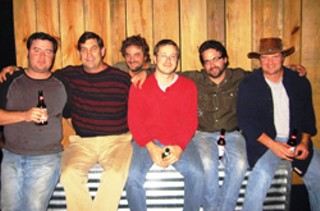 IT'S BEEN ALMOST 20 YEARS SINCE STEWART MARSHALL first collaborated with Winfield Smith, and in that time, the two singing guitarists’ six albums’ worth of original material have won them no small number of fans throughout the United States.

Routinely described as a duo whose feel-good (yet at times, bittersweet) roots-based “y’allternative” pop is a little too country for rock and roll and a little too rock and roll for country, the two Savannah natives relocated to Athens, Ga. in the early ‘90s, and quickly established themselves on that fabled music mecca’s bar scene, while still juggling their educational responsibilities.

Looking back now, Marshall says he’s glad he and his partner finished college before lighting out for the “greener pastures” of Colorado — known far and wide for its acoustic and jam-band scene.

“That was a good thing, because I know a lot of people who moved before graduation and never seemed to finish. We’d heard a lot of bands from there that impressed us — like Leftover Salmon and The Samples. Of all places, I was actually introduced to bluegrass there, even though it came from the hills of North Carolina!”

According to Marshall, the melting pot of influences he and his partner were exposed to in Telluride played a great role in shaping what would eventually become their calling card: harmony-drenched, heartland rock with a strong alt.country influence.

“You heard country elements, blues, bluegrass and straight-up rock and roll out there as well,” he recalls. “Plus, at the time, it was just Winfield and myself, performing as an acoustic duo, so our voices got really strong together.”

Although he “moved there for a season and wound up staying for three years,” Marshall would eventually return to Athens, and, along with Smith, form a full-on electric band that also bore their name. To the two budding singer/songwriters it was yet another natural progression in what was quickly becoming an unorthodox career.

“It just felt right to add additional instrumentation to our songs,” Marshall adds. “When you have a studio at your disposal and you want to experiment, that’s what happens. Then, at a certain point, we felt we had to take that sound on the road.”

For serious bands who must tour to survive, Athens —with its built in cachet as the birthplace of successful groups such as R.E.M. and Widespread Panic— was a much more logical home base than Savannah, explains Marshall — although he’s quick to note the two frontmen have never forgotten their formative years in this sleepy coastal town.

“From a geographical standpoint, Athens was a better hub to be based out of. Also, it’s an easier town to be poor in. (laughs) However, our brand-new CD is titled Sandy Britches, which takes us right back home to the kinda slow-going atmosphere of Tybee Beach which has always resonated through our music.”

This weekend, longtime fans and new converts alike have a rare opportunity to catch them in a full-band format, when Stewart & Winfield bring that local resonance back home for their first Savannah appearance in half a decade.

Saturday’s concert at Trustees Theater finds Marshall and Smith joined by longtime bandmates Carlton Owens, A. J. Adams, David Nickel and Allan Hughes for a two-hour trip through their back catalog. At well over a thousand seats, it’s a larger than average room for the group, but after taking a break from the grueling life of full-time, independent touring, Marshall says he’s been surprised of late to find the group’s name recognition is allowing them to occasionally headline bigger venues.

“You take a little break and lo and behold, every place we wanted to play when were hitting it hard that never seemed to materialize is now possible.

“You’d think if you played a little 100-person club for five years, you’d get a chance to step into a theater situation, but a lot of times that never happens. This particular show wasn’t born of us saying we wanted to play the Trustees Theater. Someone approached us and said they’d like to get us into a larger room like that, and it’s an honor to say yes.”

In a sense, that someone was Elaine Barrow, a board member of America’s Second Harvest of Coastal Georgia, a volunteer-driven, charitable hunger relief organization serving 21 counties in the state.

“She was instrumental in educating Stewart about Second Harvest,” explains Mary Jane Crouch, Executive Director of the organization. “He was so impressed that he spoke with his bandmembers, and they volunteered to donate their talents to help feed hungry people.”

Crouch says this is the first time the organization has ever held a concert of this type to raise funds, and that they have high hopes for the event, which is being facilitated in large part by the Savannah College of Art & Design.

“SCAD is a wonderful community partner, and are always willing to help Second Harvest,” says Crouch. “We knew what a great venue they have to offer. The band had never played Trustees Theater and was exited about the prospect.”

Crouch says the theater’s staff has been invaluable throughout the planning stages of this high-profile benefit concert.

“They’ve been a blessing. They’ve guided us the entire way with suggestions and ideas on how to make it enjoyable, and a success.”

According to Crouch, rising fuel costs have hit her agency very hard, making it extremely costly to even deliver the food which is often given to them free and clear.

“For example,” she says, “last week we received a donation of an entire tractor trailer load of corn — but the cost of getting it to Savannah was $1,200. We’ll be using proceeds from this show to help bring more food into the food bank.”

Crouch says Second Harvest needs to sell about 250 tickets in order to cover their basic expenses, and their goal is to sell at least 500. That number would raise close to $6,500. Although they have yet to sell enough to break even on the show, she’s hopeful once word of this special performance spreads, they’ll meet that goal.

“It’s great music and great fun,” enthuses Crouch. “Where else can you go and listen to a live band and help your community for only $15?”

For his part, Marshall says he and his bandmates are thrilled to bring more awareness —and funding— to such a worthwhile organization, but they’re not driving themselves crazy preparing for the gig. He says in this group, things work better that way.

“We’ve thought a lot about the setlist, but as far as maintaining the sort of spontaneity we thrive on, we’re just planning on letting it fly. When you spend six or seven years on the road with the same folks, you all know the songs very well.

“Winfield and I have played together since 1989. So, we’ll probably throw in a couple of unexpected covers off the cuff to keep things interesting. But the crowd won’t get a sterile, over-rehearsed show.”

Another thing the crowd won’t get is alcohol. Trustees Theater is a “dry” venue, which might seem odd for a group like Stewart & Winfield, as a majority of their fanbase were in high school or college in the mid-to-late-’90s, and are probably used to seeing the band in a smoky bar or music hall with a libation in hand.

Marshall says he’s not too worried about that particular caveat detracting from the overall experience, or keeping any of their fans away, although he admits the band is not accustomed to such an environment.

“That’s a new one for us! (laughs) Not having any alcohol served there means it’ll probably be a lot quieter than most of our shows, so we can open up and play more with dynamics. We’ve done a handful of theater shows over the last few years, and it’s always an opportunity for those of us onstage to really hear clearly what each band member is doing.

“Then again, it’s appealing to be playing for people of all-ages. A lot of our fans now have children and some tell me their kids enjoy our CDs as well. I expect there will actually be a bunch of youngsters there, which should be very cool in its own way.

“Plus, he notes with a devilish laugh that although there is “no direct family relation,” the hotel directly across Broughton St. from Trustees Theater does have a bar.

“They don’t call it the Marshall House for nothin’! (laughs)”