A name that will live forever 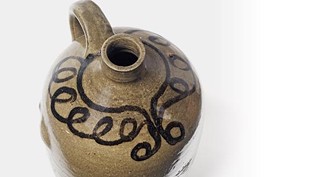 IN A TIME when African Americans could be killed for learning to read and write, he boldly signed his work: “Dave.”

His pottery, all made in the mid–1800s just up the Savannah River near Edgefield, S.C., is some of the most beautiful functional art ever made in America.

You can see some of it for yourself through December at the Jepson Center in the show “Beyond Utility: Pottery Created by Enslaved Hands.”

A photo of a jar just doesn’t cut it. To appreciate the work of David Drake — aka “Dave the Slave” and “Dave the Potter” — and his other contemporary Edgefield potters, you need to see the real thing: the lucid alkaline glazes that were groundbreaking in their time, the delicate strength of these works created from some of the best clay deposits in the world.
Though enslaved, the people who made them were master artisans — so much so that the village of about 15 families that worked in the area simply became known as “Potterville.”

Their skill level was so highly regarded that even after emancipation, many stayed and continued making pottery for their former owners — though of course for pay this time.

In the case of Dave the Potter, the literacy that enabled him to sign his work, and therefore be well–known to us today, may indeed have come from a former owner.

Henry Drake, the folktales go, was quite religious and thought it only natural that his slaves should be able to read the Bible. He may have taught Dave and other slaves to read, counter to the law of the time.

In any case, Dave clearly thought well enough of his former owner to take his last name after the Civil War.

“This is a pretty amazing story in Southern history,” says Telfair Museums’ Owens–Thomas House Director Tania Sammons, who helped bring in not only the “Beyond Utility” show but a concurrent “Slavery and Freedom in Savannah” Symposium, which is free and open to the public.

“Part of the reason we had this exhibition at this time is we’re also doing a symposium about free blacks and enslaved people in Savannah,” Sammons says. “We wanted to have something tangible that people could see.”

One of the presenting scholars at the symposium is Leslie M. Harris, history professor at Emory University.

“The symposium is going to show how important slavery in cities was at that time,” she says. “Scholarship has moved away from sort of describing the pretty house and nice china, and really talking about some of the difficult relationships involved with urban slavery and recognizing that black people had a huge presence in these houses.”

Slavery in an urban setting had a number of key differences from the usual Gone With the Wind plantation scenario most people imagine.

“Black people owned by white people sometimes lived on their own in the city in their own neighborhoods, sometimes in contradiction of the law. They paid their owners under agreements so they could do that,” Harris says.

“Because of the kind of work necessary in cities, owners would give slaves more autonomy, such as the ability to go to market and come back. Things like that make slavery in cities look a little different,” she says.

Like today, Savannah’s population during slavery was roughly a 50/50 black/white split. But the population of urban blacks wasn’t usually as stable as the white population.

“Many times the wealthiest slave owners would rotate enslaved people into the cities and back out to the countryside,” Harris says.

“Those churches appear to have had congregations that combined free blacks and enslaved people together. The leadership was shared by slaves and free blacks,” Harris says.

“To have those institutions have such a visible presence in the city is pretty amazing in the antebellum South.”

An opening reception for the “Beyond Utility” exhibit is coordinated to happen the same evening as the symposium, after the keynote address by Prof. Harris and Daina Ramey Berry of the University of Texas. The choir of the Second African Baptist will sing at the opening of the symposium.

A book to be published by the University of Georgia Press will summarize the research presented.

“This is in some ways groundbreaking,” says the Telfair’s Sammons. “The research presented here has national importance as well as local.”

Through Dec. 18 at Jepson Center

Slavery and Freedom in Savannah