A new age of good vibes 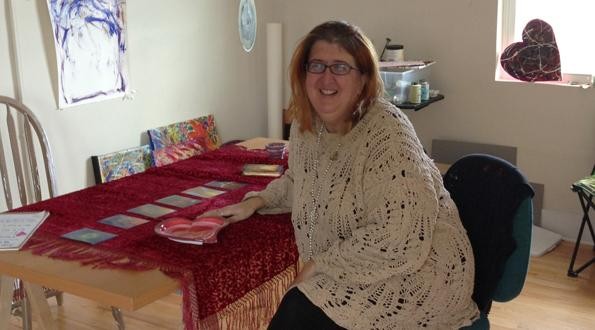 The problem with New Year’s resolutions is that they’re so, well, resolute.

If you’re the type to make resolutions and keep them, awesome. For me, it’s just another ticket down Shame Spiral Central. Even though I quit smoking years ago (tip: it’s not the quitting that’s hard, it’s the not smoking again ever) and I eat kale several times a week (for no other reason than it’s just so good!), I do not possess the kind of self–discipline to say, stop swearing on January 1 and then not cuss a blue streak 10 minutes later when the dog pees on the rug.

Resolutions bring way too much stress when we can’t live up to our own unrealistic expectations. Maybe I could handle it if we called them New Year’s Suggestions, or perhaps, Goals You Might Entertain But No Pressure. When it comes to self–improvement, what I’m aiming for in 2013 is to enjoy life and not take it so f@#$ seriously.

In the interest of enlightening up, I scheduled a session with Joanne Morton, a “positive energy artist” who has traveled around the country spreading her gospel of the “renewable, sustainable energy source found within all of us.”

When she’s not painting canvases in exuberant hues or riding her ribbon–festooned bike around town, this beatific lady offers guided meditations to help folks connect to their own inner peace. Now doesn’t this sound like a more pleasant New Year’s activity than pledging to clean out the hall closet or swearing off chocolate?

The former New Yorker has settled in Savannah to practice out of the new Anahata Healing Arts in the former Yoga Co–Op on Drayton, where she and yoga instructor Lynn Geddes have collaborated on this “sacred space for anyone who is interested in living from their heart.” Geddes has a calendar of yoga classes and workshops scheduled in the serene main room, and Morton hosts weekly dance parties and “manifesting circles.”

These gatherings are based on the practice of the Universal Law of Attraction, the increasingly popular notion that our thoughts inform our experience. Also known as “The Secret,” (maybe you heard about it from Oprah?) it dictates that focusing on what we want rather than our lack of it, we make room for it to show up. Conversely, if we remain stuck in our worries and fears, that’s what we get. A simple concept, but not so easy to implement, especially when you’re caught in one of those pre–dawn insomniac loops that make the extra 10 pounds on your thighs or the bills on your desk seem insurmountable.

But Morton sees her job as bringing these New Age ideals down to earth.

“I work with people to strengthen their imaginations because that’s where we co–create our realities,” she explained as I sat down in her sunny upstairs studio at a table draped in a red velvet scarf. “Even if you don’t believe it, you can pretend. This is about play.”

Her good–natured, unattached attitude about what stodgy Savannahians think about her work confirms a certain authenticity. Morton laughs a lot about the paradox of bringing the New Age to the Old South, exemplified in the fact that she rocks a quartz crystal pendant and a strand of pearls at the same time.

Our session began with a few deep breaths, then she had me write down three intentions (not resolutions, she assured me) for the new year. Then she took out a stone pendulum to commence with the chakra clearing.

WTF is a chakra clearing, you ask, possibly snorting derisively?

Rooted in ancient Buddhism and Hinduism, the 7–chakra system is defined as points on the center line of the body where energy flows freely or is blocked. In her bestselling book Anatomy of the Spirit, medical intuitive Caroline Myss writes that “every thought and experience you’ve ever had in your life gets filtered through these chakra databases,” and when they get all mucked up from emotional trauma or creepy episodes of Homeland, they can cause physical problems. The theory goes that releasing any built–up energetic gunk helps your inner rainbow shine.

The swings of the pendulum conveyed that my second and fifth chakras were blocked. The second — or sacral — chakra is associated with the color orange and governs creativity; perhaps it’s been pummeled with the challenge of coming up with ideas for this column every week. The fifth chakra, at the throat, is depicted as blue and rules over speaking one’s truth. Though I don’t usually have any problem expressing myself, we interpreted the pendulum’s slow swings as the difficulty in writing about unpopular opinions on local issues (SHEP, *cough, cough*) and fringe things like chakra clearings.

I’m happy to report my heart chakra, the fourth one up the line that indicates how we experience joy and love, made the pendulum swing far and wide. The Sanskrit word for the heart chakra is anahata, and thus the inspiration for Anahata Healing Arts —which its founders refer to as AHA. “It was a real ‘a–ha’ moment when Lynn and I figured that one out,” grinned Joanne.

The session continued with an oracle card reading to help move out negative juju and make space for the good stuff. Not surprisingly, the reading revealed that I struggle with the temptation of negativity and the fear that this whole messed–up world is basically hopeless. However, according to the cards, my future holds strength and purpose, as long as I approach it with patience and planning. This I can handle.

Afterwards, the pendulum confirmed all chakras operating at optimum levels. I glanced at the positive affirmations Morton had painted on the walls in vibrant colors: “I Am 100% Self–Approved” and my favorite, “Progress Not Perfection.” Maybe it’s just positive thinking, I felt calm and ready to face a new year.

I’ll admit that giving one’s chakras a scrubdown sounds nutty. But it doesn’t sound half as insane as stationing an armed guard in front of every public school in the country. If mulling over our fears gives them strength, then I prefer to choose love, every time.

Clear your chakras and more at anahatahealingarts.com.