A new look at Anne Frank

When Benjamin Wolfe learned he had the opportunity to direct the Little Theatre's upcoming production of The Diary of Anne Frank, he was a little hesitant.

"I thought it was a little dated - like, this has been done, we all know it, everybody's going to walk in knowing how it's going to end," laughs Wolfe. "This is Anne Frank - there are no surprises with Anne Frank!"

What changed his mind was the fact that this script is a recent adaptation, first seen on Broadway in 1997 with Natalie Portman in the title role.

The things that Anne's father didn't want to see the light of the day include her comments about her advancing puberty.

"Anne spoke about things that weren't appropriate for a 13 or 14-year-old girl to be speaking about on stage during the '50s when this was first staged, and Otto until his death didn't allow their release," he says. "This new script also modernizes arguments they have - the dialogue is sharper, it's got a very modern feel to it. It's not antiquated dialogue. It's really much more powerful than the original version."

"The things she says are really what a teenage girl goes through," Pearlman says. "People don't realize how hard it is for teenage girls to come out of that awkward stage, and this script really shows that it's awkward and it's hard."

While Pearlman is no stranger to theatre, she says playing Anne is "a little scary. This is the biggest challenge I've had in a play before, but I like the role. It's hard in the sense that Anne was such a little girl, not mature, in the beginning of the play. And she really grows up into a young woman."

"This new version of the script really plays up her silliness and immaturity," echoes Wolfe. "You see her evolve from 13 to 15, and you really see that in Nicole's performance."

Wolfe says that even in a Holocaust-themed play, it's important to bring out the fact that people are people no matter the situation. They laugh, they joke, they play - even in the middle of unparalleled disaster.

"These are real people - they were quirky, they were funny. We don't want the audience to come in with a tissue in their hand ready for the journey," he says. "And I'm casting funny people, too, which helps. These are the people who made me laugh at an Anne Frank audition, which is not easy to do!"

Pearlman adds, "Anne is the kind of girl who looks at the brighter side of things, so it's kind of easier to see things she can laugh at, because she's a glass half-full kind of person."

While Wolfe is best known locally for his work on such flashy musicals as The Full Monty, he's stretching his wings a bit on Anne Frank.

"We're going to have a thrust stage configuration, so the audience is on three sides. At times we have as many as 11 people on stage," he says. "Trying to stage those sight lines, I had a magnet board and it was like John Madden, where I'm circling who's going what direction and where."

So in this current civics-challenged environment - where people routinely compare U.S. presidents to Adolph Hitler - are young people in America really growing up with a sense of how almost unspeakably evil Hitler and the Nazi movement really were?

"I don't think they can really show that in school," Pearlman says. "When I read this play, that's what showed me how cruel the Nazis and Hitler were.

"I don't think people can really know what it was like with someone just telling you how it is. You have to actually experience it. And this play is the closest thing to doing that." 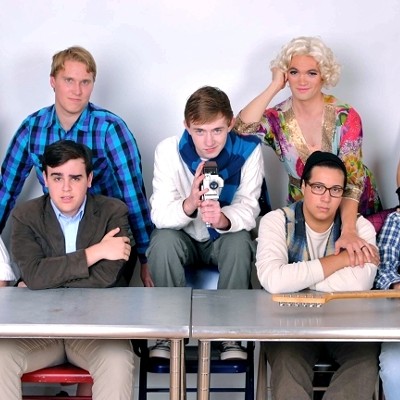