Savannah Stage Company’s mission since the theater group started in 2012 has been a simple yet important one: they want to provide accessible theater to our city and beyond, to anyone and everyone who wants it.

It’s the intention behind their “pay what you can” policies in the past, and that generosity has carried them forward as they grow with each season. Last season featured several great shows including Beauty and the Beast, Violet, and Billy, Goat, Gruff: The Musical. All three were part of their “season of bravery.”

For 2020, the company is prepping a new season of shows and plans to expand their previous touring endeavors. To celebrate their 8th season announcement, Savannah Stage is partnering with Ghost Coast Distillery on Fri., Jan. 24 for a free party that artistic director Jayme Tinti promises is full of reveals. 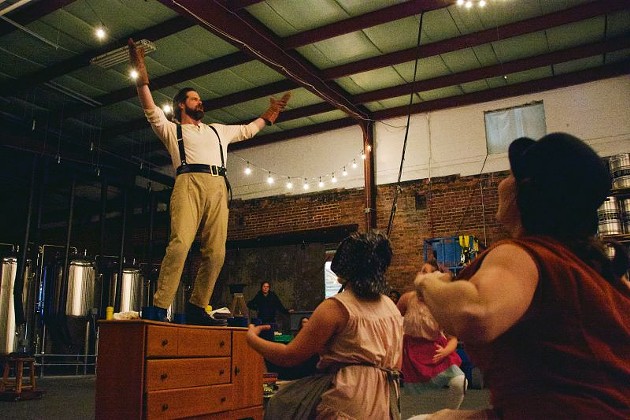 From "Beauty and the Beast."

“It’s our first time doing an event with Ghost Coast Distillery, which is really exciting,” Jayme Tinti. “They’re doing a specialty cocktail for us called the Golden Lightbulb, and lightbulbs are very important to the foundation of Savannah Stage Company. It’s all about having ideas and executing them.”

As they’ve done with previous season announcement parties, Savannah Stage will be giving out Golden Lightbulb awards to company members that represent their many values.

“We do a company member of the year as well, and I hand make these awards out of actual lightbulbs that we save all year,” Tinti says. “That’s always my favorite part of the night—recognizing company members that go above and beyond.”

The event will also feature what Tinti refers to as “snack-sized segments” of the shows slated for the upcoming season, as a way to get people excited for what’s ahead. Music, drinks, raffles, and more will round out the event, but what’s most exciting for the company is the opportunity to reveal their new season and other major plans for 2020.

“We’re going to make some big announcements as far as venues [for the shows] and touring plans, so it’s a big night of reveals,” she says. The season artwork will also be unveiled at the party.

Tinti was willing to tease a little bit of what’s in store for the season, though most of it will be saved for the big party on the 24th. What she did say was that this season will be the “season of imagination,” which continues their tradition of tailoring seasons around a theme that stems from the values they were founded on.

“We’re extremely rooted in our values as a company. We feel like that, and our mission statement, is what sets us apart. That’s what gives a company its individual flavor, so we stick very closely to our values,” she explains, adding that the shows this year are all “classics.”

“They’re all stories that we’re all familiar with, whether you’re into theater or not. We’re taking those classics and giving them a Savannah Stage Company reimagining,” she says.

“How do you take something that everybody knows and do it our way? We only know how to do that through our values.”