A Part of Pin Point 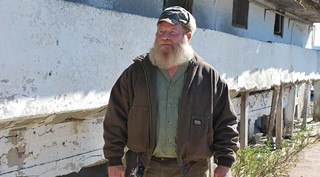 BEYOND THE LOWCOUNTRY, the community of Pin Point is best known as the humble origin of U.S. Supreme Court Justice Clarence Thomas. But its merits far outreach its reputation as the birthplace of the conservative adjudicator.

A new project launching this month, the construction of the Pin Point Heritage Museum, seeks to protect and preserve the community's unique cultural significance beyond its most powerful native son.

The first phase of work has begun on what will become the museum, a multi-million dollar restoration and refurbishment of the former A.S. Varn & Son Factory, which was the economic heart of Pin Point until it shut down in the 1980s.

The project is being funded by an anonymous donor out of respect for both history and Justice Thomas.

While the heavy equipment and men in hard hats haven't arrived yet, work has begun on cleaning out the old dilapidated buildings and cataloging items to be displayed at the museum, which is slated to open in Fall 2011.

Once completed, it will offer a first-hand look into the oyster and crabbing industry that was the economic heart of Pin Point for generations - including demonstrations in net making, crab trapping and other activities.

The exhibits will extend beyond shellfish, however, and will also help visitors explore the history and culture of Pin Point, including a documentary featuring stories from many longtime residents

"Our goal is not to tell a story, it's to provide a canvas for the community to tell their story," says Emily Lasko, the spokesperson for the Heritage Museum project.

The history of the community stretches back to the late 1890s, when several African American families, who left Ossabaw Island after a devastating hurricane in 1893, purchased land from Henry McAlpin. Among the first plots purchased was the land at the corner of what is now Lehigh and Pin Point Avenues, where the Sweet Fields of Eden Church has stood for more than a century.

Algernon Varn opened his factory in 1926, specializing in oysters and crab, and became quite successful. At its peak the facility was selling seafood to restaurants in New York City, Washington D.C., Atlanta and the Carolina highlands, as well as locally.

"All the people in Pin Point who wanted to work, it gave them full time jobs," explains Barbara Fertig, a history professor at AASU who has studied Pin Point's history since the early '90s.

"It kept the community together in a way that other communities didn't quite achieve."

The factory became part of trinity of structures, including the Sweet Fields of Eden Church and Pin Point Hall, which were the foundation of civic life for generations in the small, tight knit community.

"It has an awful lot of people who revere it as a place where life went on for a long time in a traditional way," Fertig says.

"We were taught to respect our elders," says Algie Varn III, who grew up at his grandfather's factory and spent much of his life as a commercial crabber.

"If kids did something they knew they shouldn't, they got a whooping. There was none of this mollycoddling."

Varn and his wife Sharon have lived adjacent to the old factory since moving back to the area from North Georgia in '93. With a long white beard and strong, calloused hands, Varn looks like an archetypal man of the sea.

"I'm thankful I don't have to do that anymore," he says in a moment of reflection.

The only one of the Varn men who actually worked on the boats, he built and lay traps until '88 when a crab-bitten hand lead to an infection that hospitalized him for 10 days.

It wasn't all bad though. Varn met his wife there - she was visiting her mother, and he was impatiently pacing the halls still attached to his I.V., which wheeled along beside him.

When the couple returned to the property, two years after the death of Varn's father and nearly a decade after the factory closed down, it was showing signs of neglect. The buildings sustained heavy structural damage and the dirt road was grown over with vines. Over time, they did what they could to clear the overgrowth.

Sharon painted a mural along one wall of what was once the crab picking house. It's a tribute to the history of place and includes depictions of young Algie playing marbles, as well as "Bacon," a net weaver and friend of the family who worked at the factory almost his entire life.

Much of the old factory was too far gone to rehabilitate without a significant investment that was well beyond their means.

Although the museum will seek to preserve the community's significance beyond Clarence Thomas, the Justice is never far from sight. On the same day Algie Varn Jr.'s obituary ran in the newspaper in July 1991, there was a spread weighing the political outcomes of Thomas' Supreme Court nomination and pending confirmation.

It was him who made the museum project possible - even though he wasn't the one who put up the money.

The idea of a museum wasn't necessarily a new one, and the need for such a project was mentioned in a Savannah Morning News article from 1997 about a Pin Point-centric exhibit at the Savannah History Museum that opened in conjunction with the Olympics the previous summer. That exhibit was compiled by Fertig and some of her students, among others.

According to Varn's recollection, the current project was born from a conversation between him and Thomas in 2007. The Justice was in the midst of publicizing his new book, and had returned to Pin Point with a camera crew from CBS to film a segment at the remains of the factory.

Thomas' mother, Leola, worked there as an oyster shucker when Thomas was young. He grew up in Pin Point until age nine, and then moved to Savannah to live with extended family.

After the TV crew had finished filming, Thomas asked Varn about the future of the property and what he wanted to happen to it. He told Varn he would have a friend get in touch with him - and last year the property was sold to an undisclosed buyer who set the project in motion.

"It's not an economic decision to do this at all," explains Lasko. "It's civic do-good."

When the factory closed permanently around 1985, it kicked one of the legs out from underneath the community.

As marshfront property values rose, so did concerns that the community, which had been mostly isolated until the construction of the Diamond Causeway in the 1960s, would be swallowed by condominiums.

Although most of Pin Point consists of modest single level homes and trailers, scattered throughout are larger homes set far back off Pin Point Avenue. The distance from the road that bisects the community seems to represent their lack of belonging, as do the gates and fences that isolate the properties.

Pin Point was once a place where residents didn't need to lock their doors at night.

Overcoming the community's ingrained distrust of outsiders with interests in property meant outreach became a crucial first step, particularly when it came to things like the documentary.

"It's been a year and a half of getting to know everybody and telling them what we're doing," Lasko explains. "It took a lot of frank discussions and community meetings for everybody to feel comfortable."

While the restoration of the buildings won't be the same economic driver for life in Pin Point that the factory once was, it will create some jobs for residents once the facility opens.

"We've worked closely with the community so they are on board and understand what we're doing," Lasko explains. "If there are opportunities the community can fill then they get first dibs, by all means."

Currently in the works are plans for a Gullah Heritage Festival to be held in Pin Point during the grand opening of the museum next year.

With blue crab populations dwindling to record lows and tighter controls on commercial licenses from the state, Algie Varn III's past profession is becoming as much an anachronism as the community where he was raised.

As he walks through the compound of buildings that is his family's legacy, Varn points out where the cook pots once stood, explains how he made his own traps, and how the facility grew and changed over time.

It wasn't easy work, but it was honest. As he digs deeper into stories about the past - from pulling a gun on a crab trap poacher to afternoon family meals at his grandfather's house - it's clearly an emotional experience.

For him, the museum will mean being able to share the experience of growing up as a part of Pin Point even after he's gone.

"I couldn't have dreamed a better dream," says Varn about the museum.

"It's the best thing that could've happened for the property and the community."