The Gothard Sisters headline the shenanigans 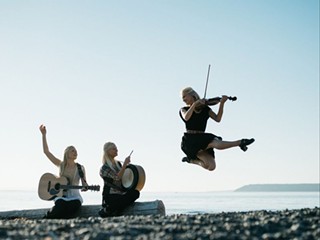 $13 per day, $17 for two days, ages 14 and under free, free Sunday with ID for active duty military and family, college students

Before the green beer keg is tapped and the parade route is closed off, Savannah celebrates everything Irish with the whole family. The Savannah Irish Festivalis in its third decade, offering a toast to heritage through live music, food and drink, activities, and more.

Wee ones can cut loose in the Kid’s Zone with entertainment and activities, while grownups can learn all about history and culture through talks by scholars and storytellers alike.

In addition to live dance from Irish Dancers of Savannah and Legacy Irish Dance Academy, traditional Celtic music will fill the halls.

For Greta Gothard of headlining sibling group The Gothard Sisters, Irish festivals are a spirited place to play.

“I love festivals, and Celtic festivals are so much fun,” Gothard says. “Everyone is coming out to celebrate the culture.”

The sister join an eclectic lineup, including Savannah Ceili Band, Seldom Sober, Dave Curley and Mick Broderick, Brendan Nolan, Colin Farrell, Harry O’Donoghue, Tom O’Carroll, Roger Drawdy, and Keith Aherne. The roster represents a mix of local and regional acts, and some, like the Gothards, come from all the way across the country.

The Gothard sisters grew up surrounded by their heritage in their home of Washington State. While each sister studied classical music as a child, all three were captured by the music of their ancestors as young women.

“We really fell in love with the fiddling,” Gothard, who studied classical violin, explains. “Our favorites were Natalie MacMaster, Liz Carroll, a bunch of these great fiddlers. We really wanted to sound like that. We started learning Celtic music and listening to Irish music.”

The girls were already immersed in the sounds, having studied Irish step dancing after getting hooked on Riverdance. Eventually, dance and song would merge for them—now, a typical Gothard Sisters show features their incredible sibling harmonies, guitar, fiddle, mandolin, drum, and live dancing.

“One day, we all started playing music together and dancing together, and it kind of turned itself into a show that used both,” Gothard remembers. “I think it was a surprise to all of us, but we were all really close growing up—we were homeschooled, so we spent a lot of time together, and we would play together and make productions even when we were little.”

In addition to writing together and performing live across the country, the Gothard Sisters produce their own albums. Working out of a friend’s recording studio, the band has released ten albums since 2006.

“Celtic music is an interesting genre,” Gothard muses, “because it’s so widespread and it comes from, of course, Ireland and Scotland and Celtic nations, but we are from Washington State, so we’re American. We’re getting the benefit of all these Celtic ancestors who made it all the way out here and to the Northwest. We like to explore how that’s changed the music a bit from generations of Irish immigrants, as their descendants. I think, for Celtic music, it’s important to know and respect and love the tradition but also not be afraid to add your own voice.”

The trio is currently in the studio working on a new album, hopefully due in spring. Soon, they’ll embark on tour during their busiest season of the year—Saint Patrick’s Day.

“Savannah is a nice warm-up for that!” says Gothard.