Where: The Rail Pub

Cost/Info: $10 presale tickets available at The Rail Pub, $15 at the door

Since 1995, The Rail Pub has held a special place in the hearts of locals and visitors alike. With peanut shells on the floor, 40-ounce beers in paper bags behind the bar, excellent karaoke, and friendly, attentive staff, the beloved dive has grown in the last few years, adding a side yard and expanding their musical offerings.

With a fresh stage from their first year as a Savannah Stopover venue, longtime bartender Sean Moloney knew it was time to book a solid day of local talent.

“I love doing booking, and I love putting together shows,” Moloney shares. “I’ve been doing shows for 20 years. I played in bands back in Detroit, where I’m originally from. I always wanted to do an all-day music fest at The Rail, and now we have a legitimate stage.”

Some folks may remember when the cozy outdoor “yard”—complete with seating, cornhole, and a small bar—was a boring ol’ parking lot. When The Rail team transformed the paved nook into the perfect hangout spot, they added a small stage for acoustic acts. As local musicians entertained regulars and brought in new guests, Moloney discovered that live music thrived at The Rail. Eagerly, he reached out to Savannah Stopover Music Festival.

Stopover utilizes a diverse selection of venues throughout the Historic District, and The Rail was a great addition. To accommodate bands like Bruiser Queen, Heaters, Wildhoney, Haybaby, Ancient Cities, and more, Moloney and fellow Rail bartender Corey Dyer added four feet to the stage.

“It’s sturdy!” Moloney promises of the platform he and Dyer built with their own hands. “It made it through Saint Patrick’s Day with drunks dancing on it. I was like, ‘Let’s keep it that way!’”

Music has become a regular part of The Rail experience, and now, Moloney is pleased to debut Railapalooza.

“I want it to be a good Savannah showcase of all-local bands,” he says.

The lineup is full of Rail regulars, including country favorites Damon and the Shitkickers, the bluesy Bottles & Cans, Irish folk-punks In For A Penny, Whaleboat (Moloney, a drummer, plays in the indie-shoegaze band), bluegrass boys City Hotel, and singer-songwriter Sarah Poole’s new rock band Ember City.

It’s not just about the music: Railapalooza will support the community through fundraising.

“[Rail owners] Swanee [Melissa Swanson] and Trina [Brown] donate over 20 grand to charity every year,” Moloney explains. “We always do charity events: Meals on Wheels, The Humane Society. So when the girls asked me to include charity in the event, I said, ‘Absolutely.’ I love doing charity; I’ve always been a volunteer.”

Wen McNally
In For A Penny

All funds from the event and silent auction will support their missions. Place your bid on covetable items like a Budweiser-branded cooler that looks like a guitar amp, a Yuengling dartboard, Jack Daniel’s and Pabst Blue Ribbon cornhole sets, and a Jägermeister chilling machine. Purchase a raffle ticket, and you’ll have a chance to win a Kahuna longboard.

It might seem a little early in the season, but it’s almost time for OctoberFest. At Railapalooza, beer fans will get the first taste of Samuel Adams’ annual favorite brew.

“They sing about beer and whiskey, so it’ll be great!” he laughs.

After the tasting, it’s time to get competitive with stein hoisting. 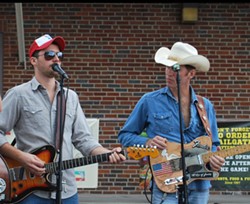 “We’ll get 20 girls and 20 guys,” Moloney explains. “There’s going to be 32-ounce glass beer steins full of OctoberFest. It’s ready, set, go, and you gotta hold the stein as long as you can.”

A seemingly simple task, but hoisting is harder than you’d think. Moloney, who’s competed before, made it three minutes before lowering his arm. The rumored world record is 20 minutes and 13 seconds.

It’s tough, but it’s worth it: if Railapalooza’s winners fall in the top scores in the state of Georgia, they’ll win a trip to Jimmy Kimmel! Live!, where 20 guys and 20 girls will face off. The winners of the broadcast competition will win an all-expenses paid trip to Munich for Oktoberfest.

Whether you’re there with a competitive spirit, a thirst for music, a taste for an afternoon brew, or a desire to give back to the community, Railapalooza has something for everyone. The all-day event may be the first of many musical celebrations in the yard.

“The bar has been growing and growing,” Moloney says with pride. “The yard is getting better and better.”