IF YOU have lived in Savannah for any time at all, it is likely you have noticed the unique black rabbit art painted on the metal door of a building that sits on Barnard Street.

Time and time again I have driven by that very spot and wondered, “What could be behind those rolling doors and who is responsible for the artwork?”

Well, my questions were answered in September. As a food lover, I could not have been more excited with the news that The Black Rabbit bar and restaurant opened its doors—big metal garage doors—to the public.

The surrounding district has gained another unique and approachable joint whose aim is to cater to locals. The responsible parties are partners David Hutchison and Patrick Zimmerman. 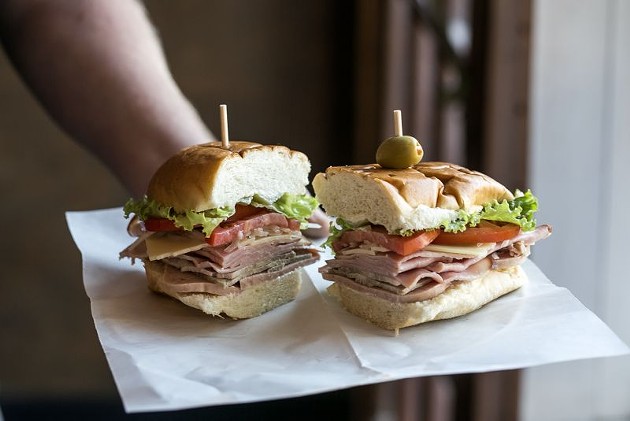 The story began about fifteen years ago when a friend of Hutchison spotted the building that now holds The Black Rabbit, which was originally a two-stall store front.

“The building literally had been a salon, a cobbler, a hotdog stand, a record store, and there was a vintage picker,” Hutchison explained as I waited for several sandwiches to come out of the kitchen.

Hutchison’s family purchased the building, and he quickly opened a gallery and intended on filling the second side of the building with a coffee shop. After several years of sitting unused, Hutchison began looking for a business partner to start building their local spot, and that’s where Patrick Zimmerman came into the mix.

The building received its name as The Black Rabbit over ten years ago, when Hutchison commissioned Miguel, a traveling artist from Texas, to paint the black rabbit on the door of the building.

As for business partner Patrick Zimmerman, he is no stranger to the local food scene. He has worked behind the scenes at both Betty Bombers and Butterhead Greens Cafe. So as you can imagine, the sandwiches he is currently putting out are nothing short of delectable. 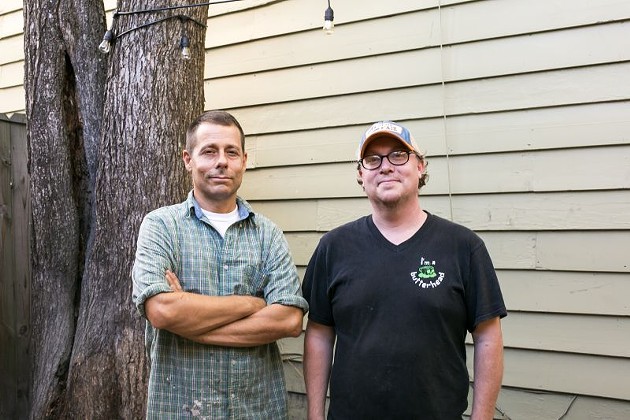 “We wanted to keep [the menu] pretty straightforward,” Zimmerman said in explaining his thoughts behind creating the new menu. “I was going for kinda comfort food but also stuff people would like, even vegetarians.”

Each type of pork on the Three Piggies contributes its own flavor profile to the sandwich, while working in harmony, creating one of the juiciest deli sandwiches I have ever tasted.

“We have a little fun, like the Three Piggies with Spam, pit ham, and sliced pork shoulder, which you do not see very often,” Zimmerman told me.

I understand that using juicy as an descriptor to explain a cold cut sandwich is odd, but the juices of the pork actually ran down my hand as I chomped down. Although included, this cold stack does not need mayonnaise to lubricate any dryness that usually comes from fresh bread.

To balance the sandwich, fresh thinly sliced onions are layered with a thick cut of tomato and crisp lettuce. The cherry on top is the extremely soft bolero bread that encases the entire thing. Gottlieb’s Bakery is responsible for all of the bread used at the The Black Rabbit.

For a side with your sandwich, I would opt for the in-house pickled vegetables, which come as spicy or regular.

“Radishes, green beans, turnips, carrots, onions, and garlic,” are cooked “real straight forward with sugar, salt, vinegar, peppercorns, water, and bay leaf. I add jalapeños for the spicy one,” Zimmerman explained when I asked how he makes his pickled vegetables.

More on the Southern side is the cucumber, tomato, and onion salad. It is just like the bowl of garden fresh onions and tomatoes you will find included on the dinner table during many Southern meals. The idea behind this side was to offer something lighter to complement the hearty sandwiches.

Finally, the German Potato Salad is available as a side. For his version, Zimmerman cooks the onions tossed with the tender potatoes in bacon fat, which results in an additional layer of flavor.

The Black Rabbit also offers dessert—King of Pops popsicles or a big slice of cheesecake from Fork & Dagger.

As for what readers, especially locals, are probably wondering the most about, the specialty cocktail menu is concise and to the point. You will find one cocktail for each type of liquor and nothing more.

No matter what your preference you will surely be satisfied with the preparation for that type of liquor.  Even more so, you will be especially satisfied after reading the price of all of the house created and made cocktails.

Being a fan of bourbon, I opted for the Grandpa’s Kisses, a title that makes perfect sense after reading the ingredient list. Both bourbon and scotch are blended with apple brandy, honey, and bitters. Served in a crystal old fashioned glass, the profile of the dark liquors are prominent yet rounded out by the addition of sweet apple and aromatic bitters.

Zimmerman and Hutchison were kind enough to let me try the Room 225, a gin cocktail that is made silky by the use of sunflower seed orgeat, a nut milk.

The cocktail is shaken with lemon juice and a few dashes of bitters before being poured into a coupe and adorned with lemon rind. It is fragrant and subtly flavored, a cocktail that would tempt you into drinking it all night.

Next year, patrons will have the opportunity to grab lunch at The Black Rabbit when Hutchison and Zimmerman expand their hours to become reachable to the entire neighborhood.